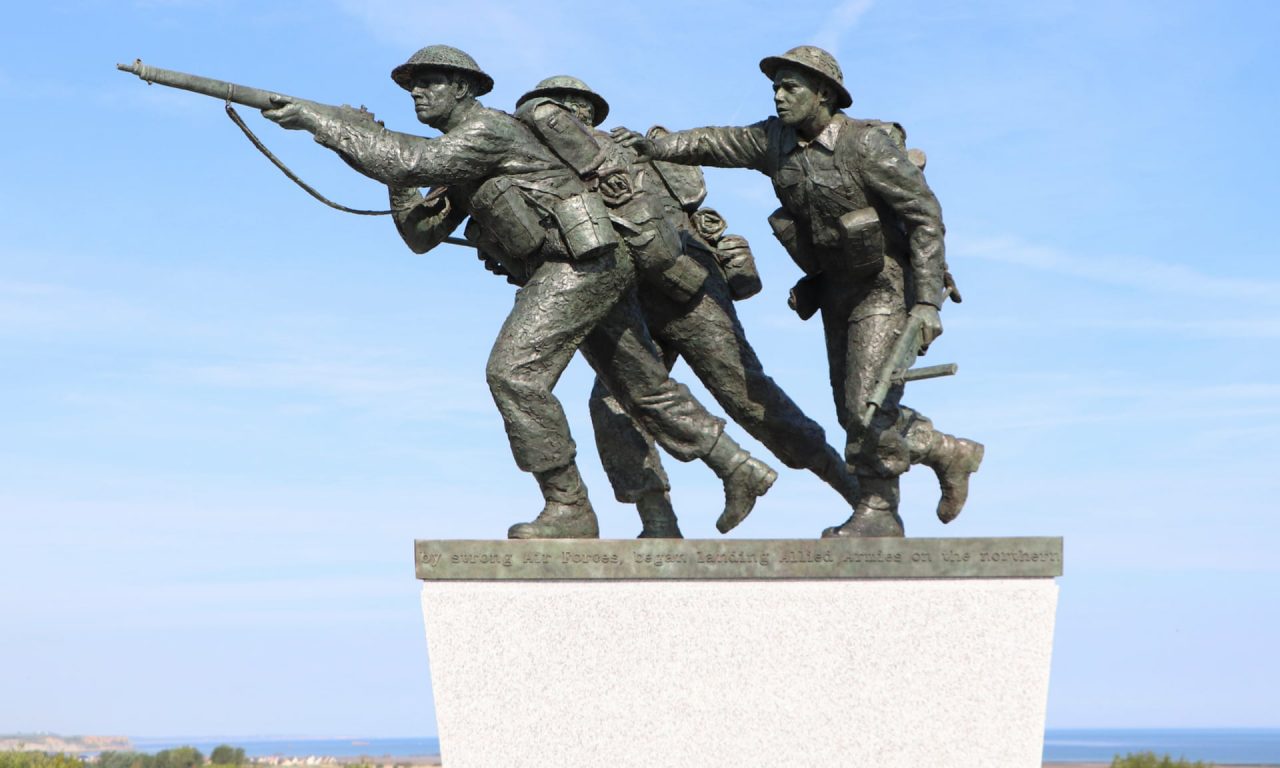 Maquettes of the bronze sculpture commemorating the 75th anniversary of the D-Day landings, by British sculptor David Williams-Ellis, will be sold at the Masterpiece Art Fair after exhibition at the Portland Gallery.

The sculpture, which after two years work has taken its place overlooking what was code-named Gold Beach during the Normandy invasion, shows a trio of British soldiers surging forward, bearing the standard weapons and equipment of the time.

The statue in Ver-sur-Mer stands on a triangular granite plinth next to Liam O’Connor’s neoclassical British Normandy Memorial, funded by the Normandy Memorial Trust, a walled forecourt with gardens and 160 columns, inscribed with the names of the 22,442 servicemen and women who died there.

Oxfordshire-based David Williams-Ellis, whose great-uncle was designer and architect of Portmeirion Clough Williams-Ellis, worked with an ex-footballer and a ballet dancer in order to model his statues from life. He said : “I wanted to have leadership and comradeship, but nothing too obvious.” Their weapons and equipment are rendered in detail but not hyper-realism, and the bronze sculpture, produced using traditional casting techniques in Basingstoke, was unveiled marking the beginning of construction for the memorial.

“It was imperative to me that the soldiers I created allowed the many thousands of people who will visit the site the ability to relate to those who died and the historical importance of the day,” said David Williams-Ellis. “I felt the poignancy of the group must convey a sense of place, reflecting that Gold Beach was the centre of the D-Day landings. It is important to remember that soldiers under British command made up over half of those who landed.”

From an aesthetic and conceptual point of view, the Normandy memorial is regarded as extremely conservative, shielded from the excesses of modern design by the private funding of the memorial. David Williams-Ellis was chosen by the architect Liam O’Connor, who was picked by the Normandy Memorial Trust. Historian Anthony Beevor said: “I think it’s a good thing they’re not trying anything controversial or radical.”

An exhibition of the bronze maquettes from the project will go on show at London’s Portland Gallery (from June 12th to 21st) and Masterpiece Art Fair (from June 27th to July 3rd), where the pieces can be purchased as individual figures (£6,750 each) or as a group (£25,000). The group is available for £25,000.