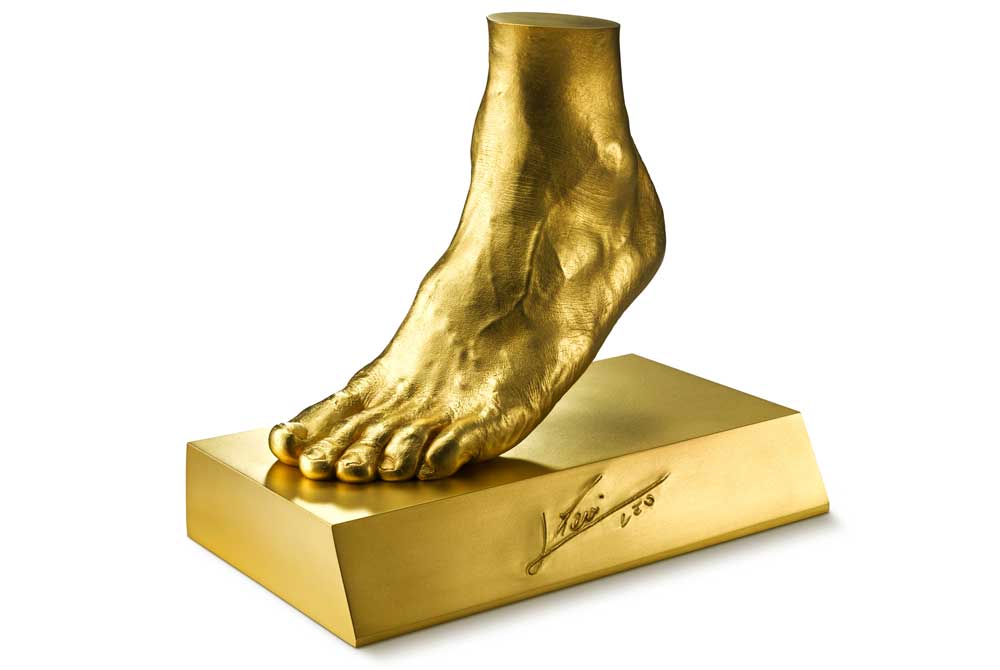 Messi’s golden foot has been created by the world-renowned firm of jewelers, Ginza Tanaka of Japan, and has a price tag of $5.3m for the 24ct foot, weighing 25kg.

There are also two other gold pieces inspired by the player for sale. Messi’s golden footprint is available for $95,000 while the ‘Golden Foot Mini’, which is half the size of the life-size gold foot, is for sale at a mere $42,000. Part of the proceeds from these sales will go to Messi’s charitable foundation which in turn will be giving aid to children in areas of Japan hit by natural disasters in 2011.

‘I’m honoured to have my foot recreated in pure gold,’ said Messi, who has been voted the world’s greatest player four times running, most recently in 2012.

Read our article on Lucian Freud, the Great British Artist.

Collector’s note:
Ginza Tanaka, established in 1892, applies a unique sales method called the ‘Sliding Pricing Method’ for specific items in gold and platinum that are available in their stores. This is a unique pricing method that works in a very systematic way, says the company. The current market rates for gold or platinum is applied to each product, based on its weight. A figure which specifies the ‘sales rate’ is mentioned on the price tag for the applicable product. The retail price for the day is then defined by multiplying the sales rate by the current market rates of gold or platinum. This means that the retail prices for certain products will change depending on the current market rate.