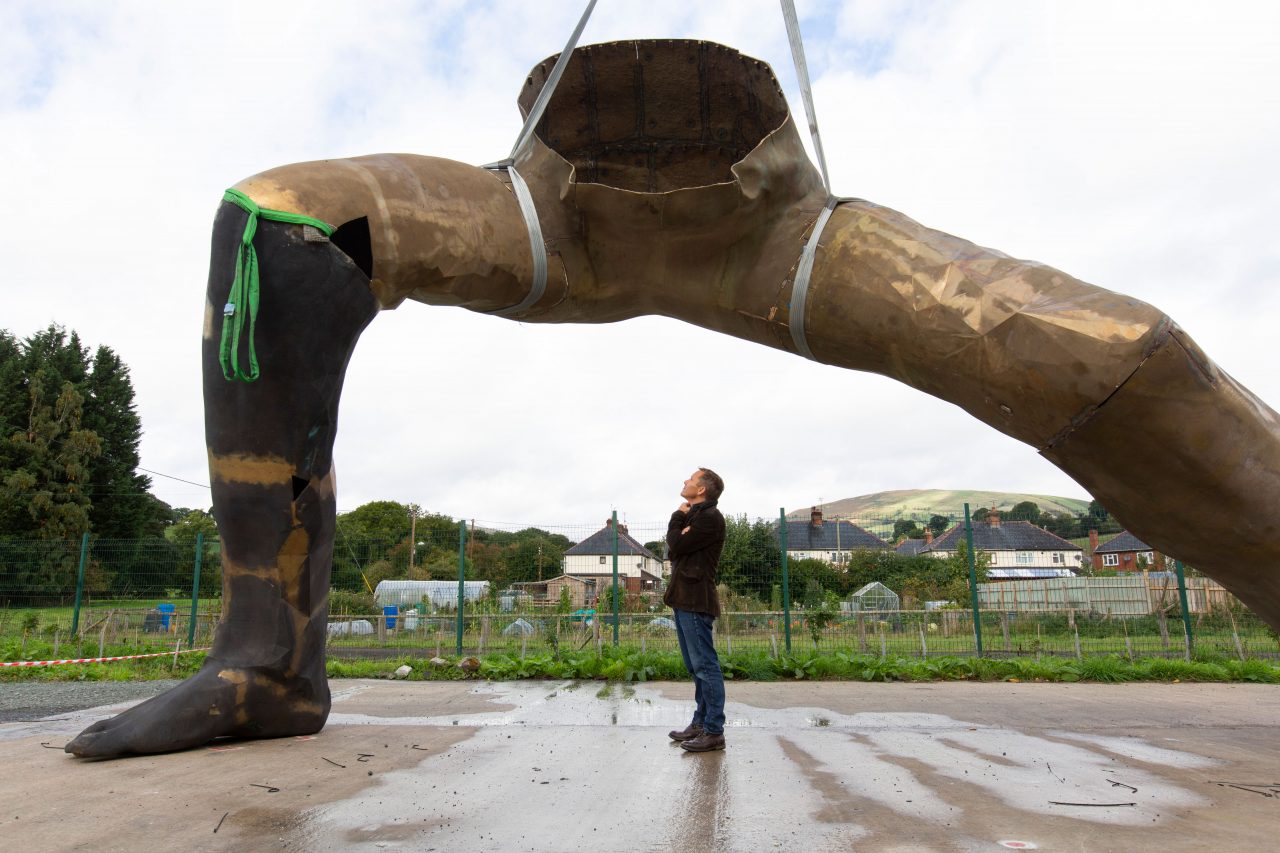 Joseph Hillier with the sculpture under construction (credit Andrew Fox)

Plans have been announced to install the UK’s largest bronze sculpture outside the Theatre Royal Plymouth.

Messenger, by Newcastle artist Joseph Hillier, will be seven metres (23 feet) high, nine metres (30 feet) wide, and will weigh 9.5 tonnes. The largest lost-wax cast bronze sculpture ever made in the UK, it depicts an actress playing the part of Olivia in a Theatre Royal production of Shakespeare’s Othello.

The sculpture will be assembled from 200 individually cast bronze panels, welded together by over 30 craftsmen at the Castle Fine Arts Foundry in the Welsh village of Llanrhaeadr-Ym-Mochnant.

Hillier’s inspiration for the sculpture came from a split-second pose struck by an actress during rehearsals, and although gargantuan in scale, the pose of the sculpture is described as “small, crouched and loaded with the potential to spring forward at any moment, a metaphor for the city of Plymouth and its creative ambitions.”

Hillier commented: “The title, “Messenger” refers to the pivotal role the performer takes to breathe life into the words of a writer and the intent of a director. The sculpture celebrates the potential of creativity as a dynamic catalyst for change. This work offers a young powerful woman, a potent force, about to transform the world by her actions. The actor carries the voice of her playwright or director – she carries a message.  It’s a metaphor for what great theatre does.”

Born in Cornwall in 1974, Hillier studied at Falmouth College of Art, then at Newcastle University where he held a research post for several years. In 2000 Hillier received the Year of the Artist Award from the Arts Council of England, while completing his earliest publicly sited projects. Elected associate member of the Royal British Society of Sculptors in 2004, Hillier has been widely exhibited in galleries and sculpture parks. He has seventeen large-scale permanent installations nationally and internationally.

Costing an estimated £450,000, and funded through the theatre’s Regeneration Project, Messenger is due to be installed in the Spring, but has already caused controversy, receiving a mixed reception from local residents, and with one newspaper headline describing it as depicting a “squatting sex worker”.