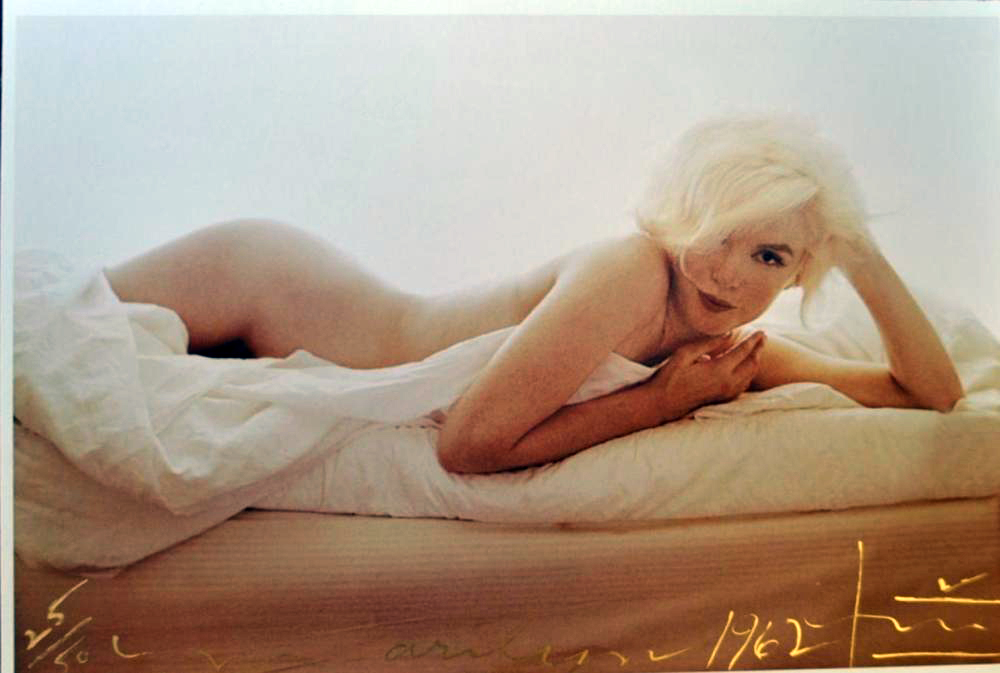 Bert Stern, a renowned American advertising and fashion photographer of the 60s and early 70s, was the last to have been granted a lengthy sitting with Marilyn Monroe, six weeks before her death on August 5th, 1962. The images of Marilyn up for auction were printed from the original negatives, signed and numbered by Bert Stern and purchased from his estate. The images also have a separate Certificate Of Authenticity signed by Bert Stern with Marilyn Monroe’s name, title of the photo and edition.

Items include a contact sheet from the “Big O” session, showing Marilyn with beads and pictured on page 456 of Bert Stern’s book The Last Sitting –

– the black-and-white Baby in Bed, an artist’s proof, number three of only 10, printed on textured photographic paper, pictured in The Last Sitting on page 400 –

Marilyn Yawning, more often referred to as The Big “O”, number nine of only 50 printed, on heavy lithographic paper, thought to be the only one offered for sale outside the Stern family, pictured in The Last Sitting on page 458 –

Crucifix IV, a colour portrait photo image on heavy litho paper with a yellow X marked across it to indicate it was not to be published, seen on page 77 of The Last Sitting without the yellow X –

Nude on the Bed, a colour image signed in silver marker on front, pictured in The Last Sitting on page 101, number 25 of 50 printed on heavy lithographic paper –

and Red Scarf, pictured on page 77 of The Last Sitting with three other similar scarf pics, but this is the one that was eventually made available to the public. This is number seven of 50 printed on heavy lithographic paper.

Also included in the auction are slides of Marilyn Monroe in 1957 from an unknown photographer, and a collection of books, framed photos and calendars on Marilyn Monroe including a novelty ‘drawing aid’ of her outline.

Estimates for the Bert Stern items start from around $4,000.

More details of the auction here; you can register to bid on the Invaluable site, here.