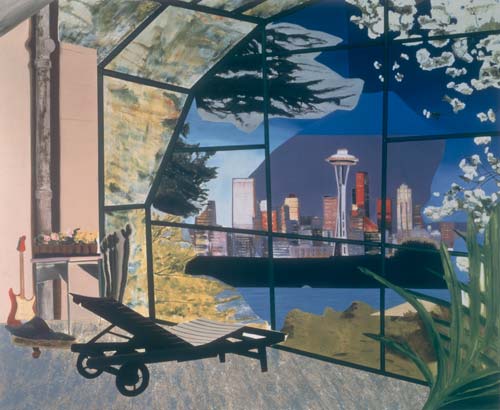 The Saatchi Gallery in London has announced a new exhibition: PAINTER’S PAINTERS: Artists of today who inspire artists of tomorrow.

The exhibition celebrates the striking works of painters who are inspiring a younger generation of artists emerging from leading art schools worldwide. Belonging to no particular style or movement, these highly diverse and individually distinctive artists bring a non-conformist approach to their painting and to the exhibition.

Making up just a small strand in the spectrum of modern art-making mediums, painting is seen less and less frequently in museums and galleries. The PAINTER’S PAINTERS exhibition brings together a small group of artists resolute in keeping the medium alive despite the decline in interest among many curators.

Brought up in the country, David Brian Smith uses earthy mixtures of paint and gold leaf in his depictions of shepherds tending their flocks. Painting on herringbone linen, Smith produces his work on the same material used for making flat caps and tweed jackets, steeping his paintings in an authentic country aesthetic.

A girl stares into the mirror in her Chelsea Hotel room, encapsulating a feeling of existential crisis in Raffi Kalenderian’s famed painting, Dasha. Kalenderian delivers relatable portraiture of young subjects to the PAINTER’S PAINTERS exhibition.

Explore the surreal in the expressionist world of Bjarne Melgaard, an artist whose work has a history of controversy as with his 2014 fibreglass sculpture, Chair.  Melgaard is unapologetic in approach, contributing oil canvas pieces such as the Untitled Dead Hooker (2007).

Dexter Dalwood forges political statements in his work, inspired by the rich and famous and the psychological conflicts they have faced. Sunny Von Bulow, a New York socialite who died in 2008, is depicted as a representation of Shakespeare’s Ophelia; captured in a state of depression and trapped in slumber in his 2003 painting, Sunny Von Bulow. Dalwood’s work also includes the oil on canvas painting Kurt Cobain’s Greenhouse (2000). The bright painting poses a stark metaphorical contrast to the late musician’s suicide site.

Further Reading: Sting and Trudie Styler’s Collection up for Sale

David Hockney Exhibition: The Life of a British Icon