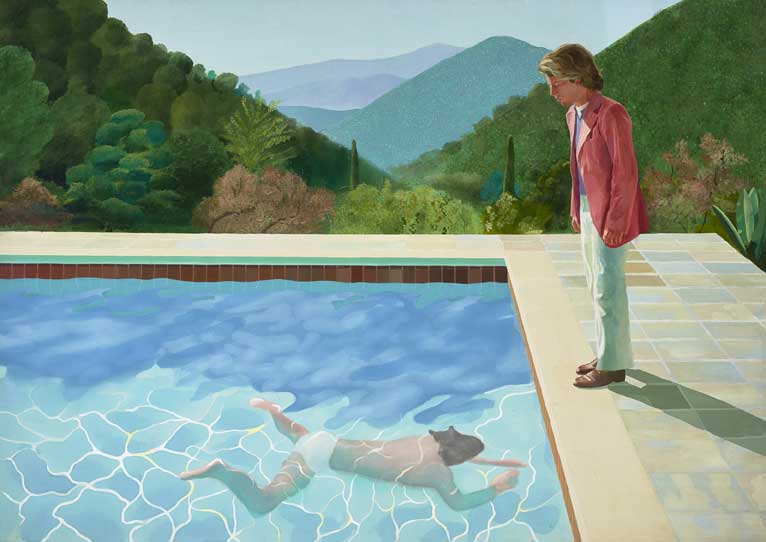 Once a rebellious pop artist, David Hockney is now considered the greatest living British painter. An upcoming retrospective will showcase a collection of the artist’s celebrated masterpieces from the last six decades.

Running from 9 February until 29 May, this highly anticipated David Hockney exhibition by Tate Britain promises to be one of the most comprehensive to date. Bringing together famous paintings, prints and portraits, the display will celebrate the artist’s accomplishments over the past six decades as he nears an important milestone of his own—his 80th birthday.

Born in Bradford, England, in 1937, Hockney knew he wanted to be an artist from a very young age, and art was a passion that both his parents supported and encouraged. During his time as a student at the Royal Academy of Art in London, he won prizes for his creations, and his paintings were purchased for private collections.

In his early years as a painter, Hockey experimented with different forms—including abstract expressionism. His material had literary inclinations as he often used quotes and fragments of poems in his work.

The British artist’s move to the West Coast of the United States strengthened and defined his artistic style—he was drawn to the colours, heat and light of California, and he finally made the move from England to Los Angeles in 1966 when he was in his late 20s.

One of his most iconic pieces, A Bigger Splash (1967), features a classic L.A. pool scene: in this masterpiece, the British artist explores how to represent the constantly moving surface of the water. Famously known for using bright colours in his paintings, these vibrant hues represented his support for sexual freedom in the context of an art scene that thought of bright colours as being ‘effeminate’. Most of his paintings from 1960 to 1970 adhered to the principles of naturalism—Hockney was very passionate about finding the perfect balance between skill and art in his representation of this movement.

It wasn’t until the early 1980s that Hockney began creating his acclaimed ‘joiners’—intricate photo collages which, according to some critics, recall Picasso’s famous cubist material. An adept photographer, Hockney used the juxtaposition of pictures (or merely Polaroid shots in the early days) to create beautiful collages full of movement and fluidity. The artist returned to painting not long after, creating colourful depictions of flowers, seascapes and portraits of loved ones.

Hockney is considered an avant-garde painter who is aware of the role that technology can have in the making of art. His unmistakable style is deeply influenced by a range of movements from Baroque to Photorealism and­­—most recently­—computer graphics. In the 90s, he began experimenting with new devices such as laser copiers and fax machines to reproduce his paintings and share his art with others.

The relationship between technology and art continued to hold a fascination for Hockney—in 2008, the artist started using Apple’s Brushes app to create lively finger-drawn depictions of flowers, landscapes, still life and self portraits. A 2011 David Hockney exhibition at the Royal Museum of Ontario, in Vancouver, Canada, showcased 200 of these paintings presented on iPhones and iPads. To this day, Hockney continues to create and influence—he avidly advocates funding for the arts.

Organised in conjunction by Tate Britain, the Centre Pompidou, Paris, and The Metropolitan Museum of Art, New York, this retrospective exhibition promises to be a once-in-a-lifetime chance to see such an extensive collection of the artist’s works—some of which have never been seen before in public—together under one roof.

The Art of Bespoke Bicycles