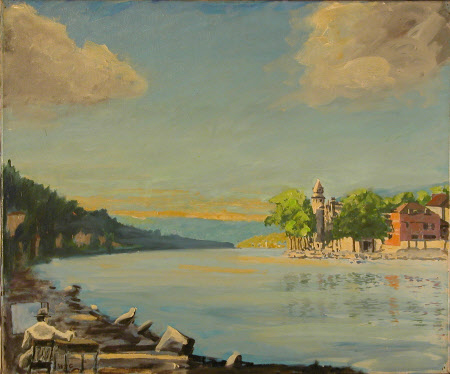 Winston Churchill was, undeniably, a man of many talents. He led the UK through World War II and was a noted historian and prolific writer. In addition to these many skills, he also had a love of painting. His work—although viewed as amateurish during his time—is well crafted and comparable to the great impressionists.

It wasn’t until he was 40 years old that Winston Churchill started painting in any serious capacity. He started off with a children’s paint box, but quickly moved on to his favourite medium—oils.

Paul Maze, an Anglo-French painter, was the inspiration that led him to pick up a paintbrush. The pair met during the World War I and Maze encouraged Churchill’s newfound hobby. Maze himself was known as ‘the last of the Post Impressionists’; he certainly had a huge influence on Churchill’s own style, as the British wartime politician is largely known for his impressionist landscapes.

He painted locations across the globe from the British countryside to the pyramids of Egypt. He often painted glistening water and dramatic skies. It is said that he rarely travelled without his paint box, especially after the war. Over his life he created over 500 paintings, often giving them away as gifts. He gave his own works of art to President Roosevelt, President Truman and President Eisenhower.

Winston Churchill painted as a means to overcome depression. He would call his depressive episodes ‘Black Dog’ and would paint and write for a sense of release. David Coombs, an author and expert on Churchill’s paintings, wrote in The Daily Telegraph in 2014: ‘For Churchill, painting in oils was a physical and mental necessity: a distraction that demanded his whole attention…No wonder his professional artist friends uniformly admired his work.’

While Winston Churchill may not be incredibly well known for his work as an artist, he certainly found a surprising amount of success with it. Even when using the pseudonym Charles Morin he was still able to exhibit five paintings in Paris in the 1920s, selling four of them for £30 each.

More recently his work has sold for much more, probably due to the combination of his skill as an artist and his fame as a politician. The current auction record for one of his works is almost £1.8m—the painting The Goldfish Pool At Chartwell (1932) belonged to his daughter, Lady Mary Soames, and was featured in a sale after her death in 2014. In a Sotheby’s auction in November 2017, a painting with the same subject, The Goldfish Pool At Chartwell (1962), was sold for £357,000. It had been gifted from Winston Churchill himself to his bodyguard and was the last piece he ever painted.

After Lady Mary Soames’ death, 37 works worth over £9m were given to the nation in lieu of inheritance tax. All but two of the paintings will remain at Chartwell, which is open to the public. Of the two, one is in the Houses of Parliament and the other in the Churchill War Rooms.

Frances Christie, head of Sotheby’s modern and post-war British art department, said: ‘He writes beautifully about how, when you attack a composition, when you work out the balance of colours and of elements, it is much like planning an offensive.’

No matter what you think about Winston Churchill’s politics, you cannot deny how impressive he was in his endeavours.

The Gallery of Caribbean Art: Where Expression and Tradition Blend