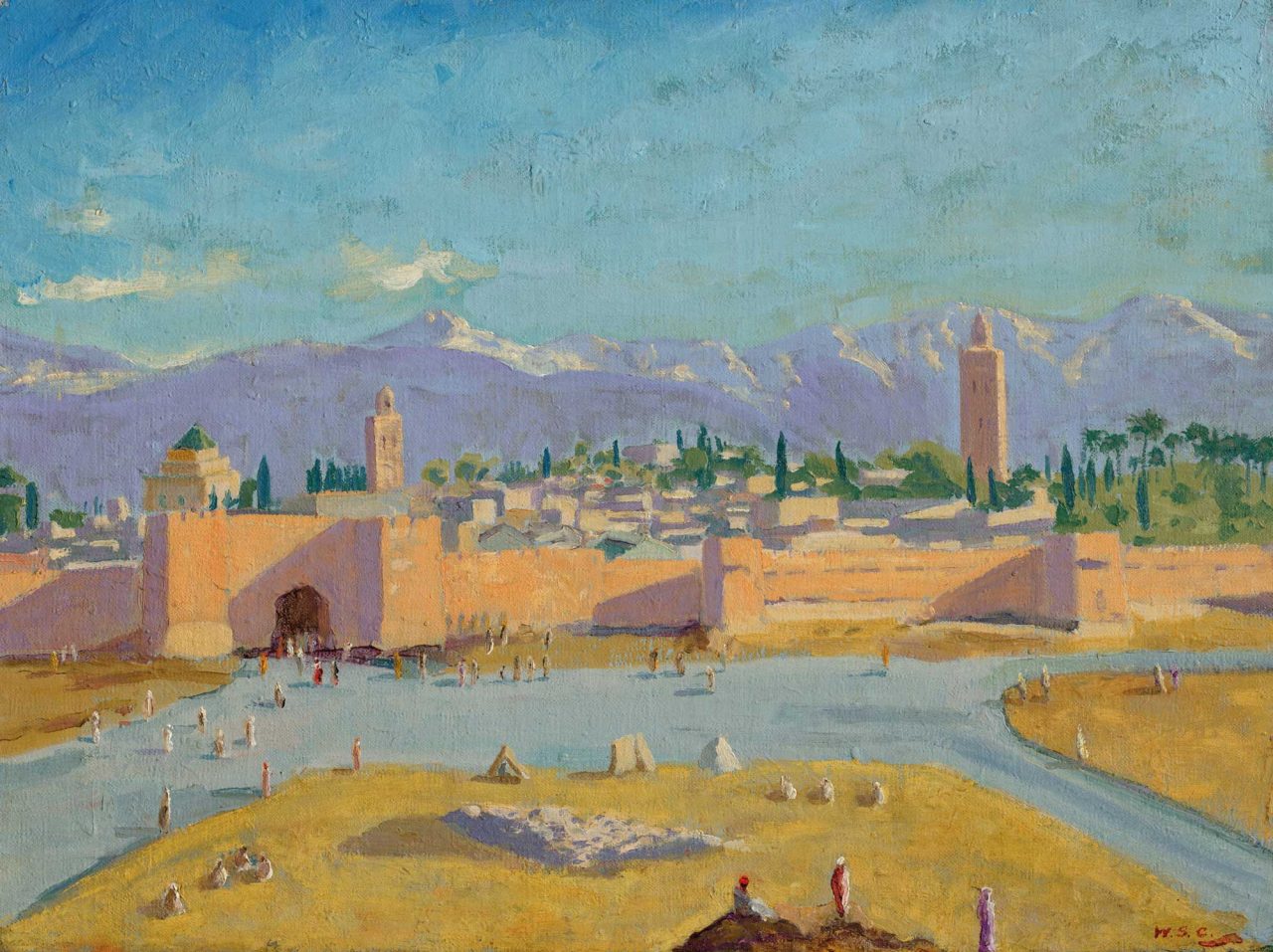 Winston Churchill’s Art and His Inspiration to Paint

Winston Churchill’s Art has sold for record prices at auction. But what inspired the great man to paint?

Paintings by Sir Winston Churchill have sold at Christie’s in London for record prices. One, Tower Of The Koutoubia Mosque, (seen above), owned by Angelina Jolie, sold to an unidentified buyer for £8.285m.

The sale price was almost four times the upper pre-sale estimate and it also beat the previous record price for a Churchill painting, which was just under £1.8m.

The image of the 12th-century mosque in Marrakech at sunset with the Atlas Mountains in the background was the only painting completed by the wartime prime minister during the 1939-45 war. It was finished after the Casablanca Conference of January 1943, where Churchill and US president Franklin Roosevelt planned the defeat of Nazi Germany.

Churchill persuaded Roosevelt to stay after the conference and take the 150-mile drive to Marrakech, saying he could not travel to North Africa without seeing the sun set on the Atlas Mountains.

The two stayed at a villa outside the city and watched the sun go down from its five-storey tower. According to Nick Orchard, Christie’s head of modern British and Irish art, Roosevelt was mesmerised by the scene. “It is an incredibly poignant moment,” he told the auctioneer’s in-house publication. “Here are two great leaders sharing the briefest respite from the traumas of war.”

Churchill remained for another day to paint the view of the mosque framed by the mountains. He sent the painting to Roosevelt as a birthday present and a memento of the trip. Mr Orchard said: “This is Churchill’s diplomacy at its most personal and intense. It is not an ordinary gift between leaders – this is soft power and it is what the special relationship is all about.”

The painting was sold after the US president died in 1945 and it had several owners before actress Angelina Jolie and her then partner Brad Pitt bought it in 2011. They divorced in 2019 and the painting has now been sold at auction by the Jolie Family Collection.

Happy are the painters – for they shall not be lonely. Light and colour, peace and hope, will keep company to the end, or almost to the end, of the day.

Winston Churchill, 1948, Painting as a Pastime.

Churchill began painting at the age of 40, and completed over 500 canvases over the next 48 years. The light of Marrakech was a favourite subject for him and he made six visits to the North African country.

In the Twenties, Churchill began to write about art for The Strand Magazine, singing the praises of bright colours: “I rejoice with the brilliant ones, and am genuinely sorry for the poor browns.” He adored Turner, the Impressionists and Matisse, particularly their skill in portraying the effect of light on landscape and water.

In 1938, he addressed the Royal Academy, placing himself halfway between tradition and modernism. “Without tradition, art is a flock of sheep without a shepherd,” he said. “Without innovation, it is a corpse. It is by art man gets nearest to the angels and farthest from the animals. It lights the path and links the thought of one generation with another, and in the realm of price holds its own in intrinsic value with an ingot of gold.”

The Second World War brought an inevitable decline in Churchill’s production of art. Painting with his friend, the artist Paul Maze, in Normandy in summer 1939, he said: “This is the last picture we shall paint in peace for a very long time.”

After losing the 1945 election, Churchill returned to painting in earnest. He told his wife: “I am confident that, with a few more months of regular practice, I shall be able to paint far better than I have ever painted before. This new interest is very necessary in my life.”

He confessed to John Rothenstein, director of the Tate Gallery: “If it weren’t for painting, I couldn’t live. I couldn’t bear the strain of things.”

In 1948, he was elected an Honorary Academician Extraordinary at the Royal Academy and exhibited there until 1964. In 1959, his RA show had more visitors than any previous one apart from a Leonardo da Vinci exhibition.

Churchill painted his last picture in 1962 – The Goldfish Pond at Chartwell – when he was 88. Given to his bodyguard Edmund Murray, it sold in 2017 for £357,000. Another picture of the Chartwell goldfish pond, which had belonged to his daughter Mary Soames, went for a record £1.8 million in 2014.