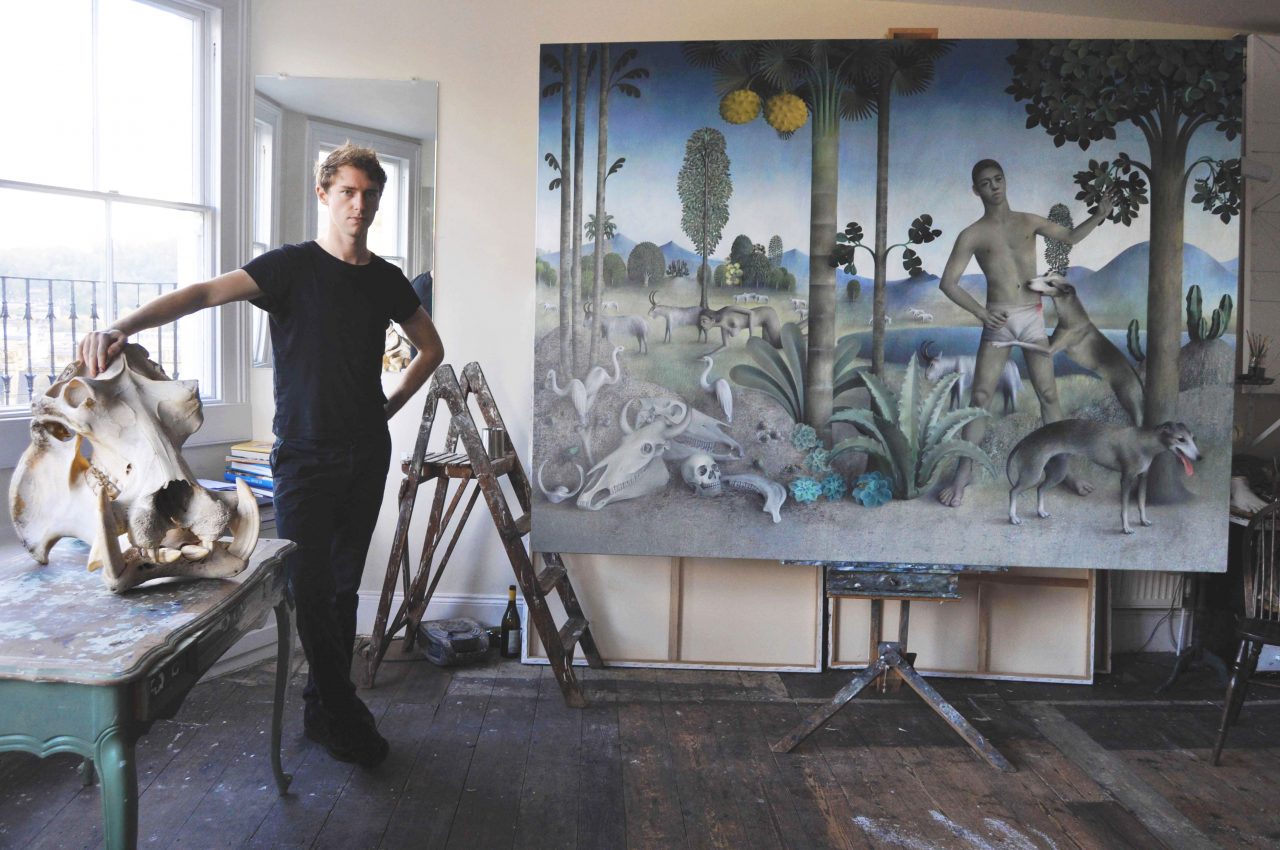 Provocative new exhibition Land of Mortimer features mystical landscapes populated by naked figures and exotic beasts revelling in macabre scenarios. Among seemingly serene settings of soft blue and green landscapes, the viewer is confronted, upon closer examination, with the disturbing realisation that characters are drowning and mauling one another.

The works in Land of Mortimer present an imagined Garden of Eden where man and beast exist on equal footing. There is a seductive air of uncomplicated freedom, with people living in communion with nature, at liberty to follow such wholesome pursuits as rowing or animal husbandry. But in exploring this idyll, James also uncovers the often-ignored implications that such an existence involves: freed from social constraint, people behave without thought in a blissful lack of self-awareness. Governed by their basest instincts, they soon find themselves given over to shameless naked abandon: foolish acts of wanton violence, sexual impropriety and long afternoons of listless indolence.

Mortimer’s work draws from an amalgam of memory and imagination, usually painting from the mind’s eye, sometimes using his own body and a collection of stuffed animals and skeletons as models for his figures.

James Mortimer says of his art: “I enjoy capturing the anticipation of something about to happen, the lull before the storm—such as a man about to ill-advisedly hit a giraffe in the testicles with a club, which can only end badly.”

Born in 1989, James Mortimer is a self-taught painter and studied sculpture at the Bath School of Art, winning the Kenneth Armitage Prize for Sculpture in 2013. Mortimer’s bronze sculpture Crocodile Head featured in the Royal Academy 250th Summer Exhibition alongside artwork by Paula Rego, Yinka Shonibare and Tracey Emin amongst others.

Mortimer has exhibited internationally, including solo shows at The Catto Gallery in London and Accesso Gallery in Pietrasanta, Italy. His first solo exhibition at James Freeman Gallery, Mortimer!, took place in 2014 and showcased a similar surreal landscape where man and beast exist together.

Established in 2003, the James Freeman Gallery focuses on contemporary classicism, presenting artists who combine current tendencies with art-historical references and exploration. The gallery has exhibited widely at both national and global level, including fairs and gallery collaborations in the USA, Europe and Asia and organises off-site shows both in the UK and abroad as a platform for artists’ work.

The exhibition is at the James Freeman Gallery, 354 Upper Street, Islington, London N1 0PD, from Friday 8 February to Saturday 2 March 2019.