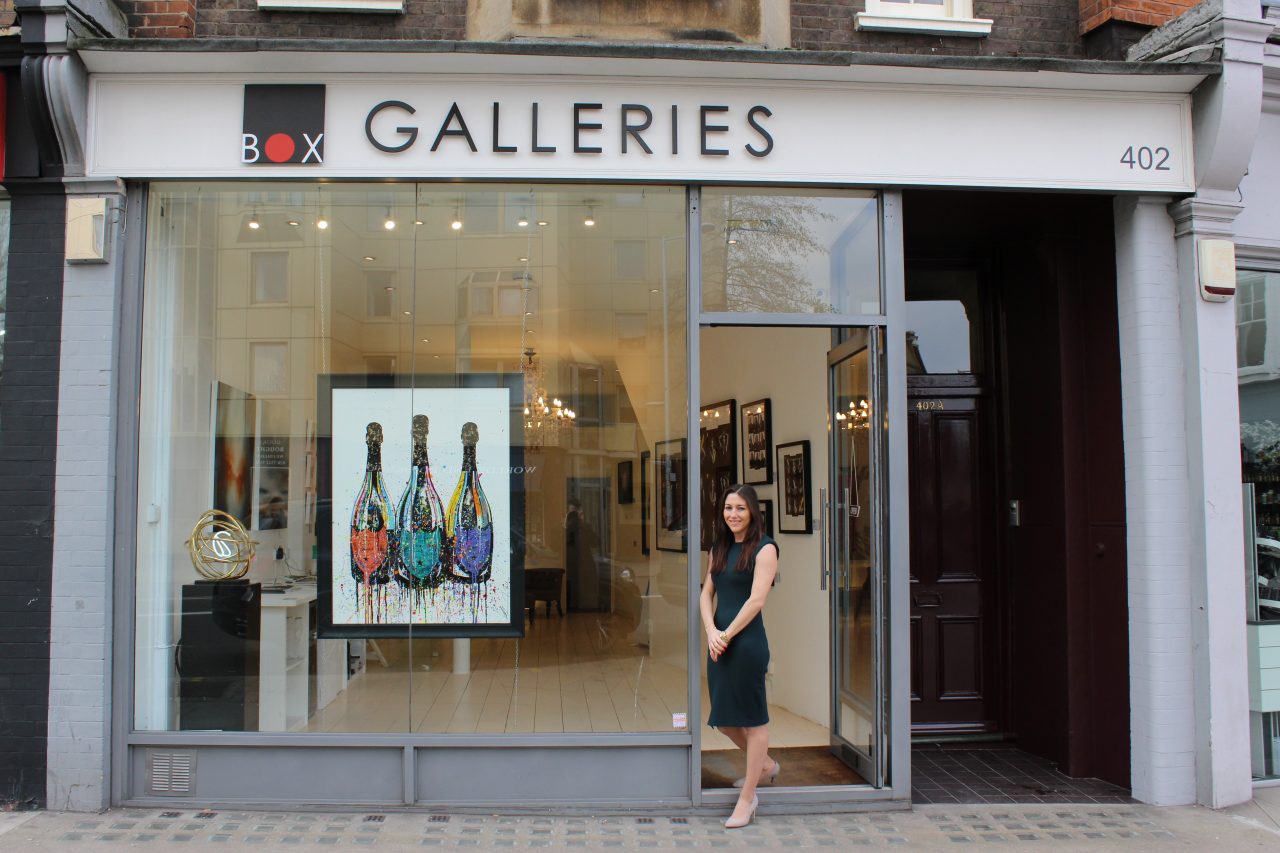 Box galleries in Chelsea is the go-to London destination for contemporary art collectors. Arts & Collections asks owner Emma Moir for her unique take on the market

Since its foundation in 2012, Box Galleries has become a reliable source of recognised investment artwork, as well as works by emerging talents in the contemporary art scene.

Emma Moir, owner of the King’s Road, Chelsea gallery, has built up an impeccable reputation for having access to artwork by some of the biggest names in the art world, including Damien Hurst, Roy Lichtenstein, Russell Young and Andy Warhol. Arts & Collections asked Emma for her unique insights into the contemporary art market—starting with the history of Box Galleries.

Emma said: “I started Box Galleries in 2012, having worked in a large commercial gallery and being given enough autonomy to have the belief I could do it myself! Although I studied law I always had a creative side, and at one point, was an artist myself, so I felt I understood both sides of the fence of business vs. creative. I wanted to set up a gallery that was in between a commercial print-orientated chain and the very high-end intimidating galleries, where you have to ring a bell to enter.” 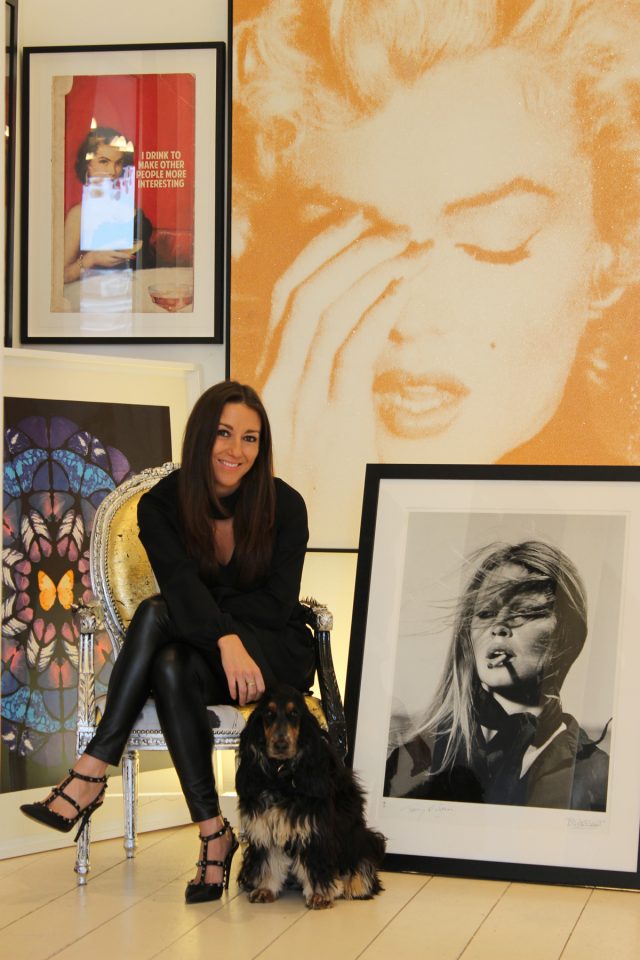 So what was different about Box Galleries? “My aim was to be able to showcase emerging artists alongside investment artwork in a welcoming environment, where clients can buy their first original, to collectors building an investment collection. Box Galleries’ place in the current art scene is as a bespoke, consultative, approachable gallery with access to higher-end artwork”.

Box Galleries now offers services ranging from investment advice to leasing schemes for hotels, show homes, members’ clubs and offices, giving companies the flexibility of rotating artwork as well as a more financially sensible way of showing quality artwork without having to purchase upfront. There’s also a home approval service so clients can “try before they buy” by viewing the artwork in the space in mind, together with advice on positioning, framing, installation and security.

But central to all these is of course the selection of artists promoted by the gallery. “As well as having continuity in showcasing some established and well-known artists such as Lauren Baker, Terry O’Neill, Mark Demsteader and others, we are constantly changing our exhibition programme, taking on new talent and offering a diverse range of interesting artwork and collaborations. I try to offer interesting events at the gallery such as wine tastings, charity events with schools, dinner parties, breakfast clubs, and recently even a charitable dog event!”

See Also: London Art Fair 2020 Connects the Best Galleries From Around the World

With events including a signing of the book King of Style by Michael Jackson’s personal dresser Michael Bush, a diamond-themed event featuring Andy Warhol works, a solo show by Lauren Baker and a showcase for celebrity portraits by renowned photographers Terry O’Neill, Doug Kirkland and Andy Gotts, Box Galleries certainly covers a wide field. But how does this reflect the state of the art investment market? Is contemporary art seen as a good or a risky investment?

“The art market has been booming for years”, says Emma, “with some of the biggest auction sales happening even despite financial/political turmoil. Personally I think clients are broadening their assets and wanting to put their money into something tangible that they can enjoy. It depends on who you talk to as to whether it is a good or risky investment—but I have had clients make up to 30 percent profit in a year through artwork, and not many industries or products can offer this. It really depends on the profile and strength of the secondary market for the artist, and the time the client allows to be tied into the artwork.”

“It is, but a lot of true collectors want me to bring the artwork to their house or office or for them to come into the gallery or a physical space to view the artwork. This is important because of factors such as size, texture, framing and provenance, and having the reassurance that they are being advised by a reliable art consultant. Although it is a good start to look online, in my opinion, the online market is saturated, and it is far more difficult to differentiate quality and worth there.” 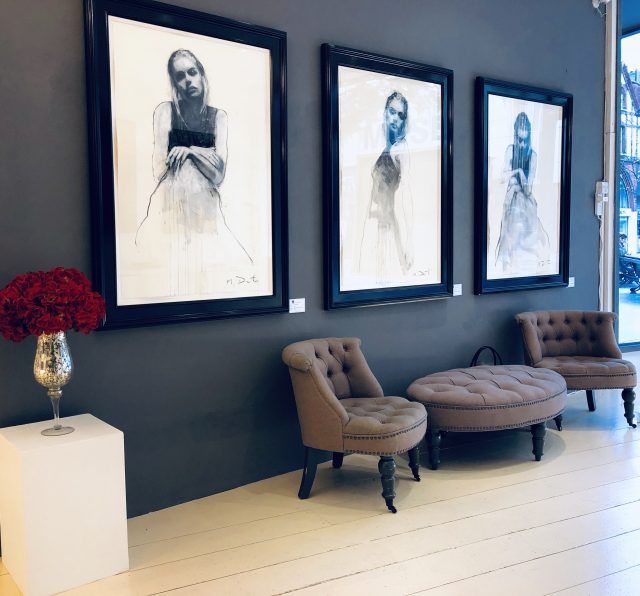 We asked Emma whether the status of ‘professional’ artists was being undermined by another aspect of technology—such as the accessibility of cameraphones and digital image editing. “I actually think it’s the opposite”, she argued, “particularly in the photography market. Now that it’s so easy to take so many photos and filter immediately, the photography Box Galleries sells such as Terry O’Neill, Douglas Kirkland and Helmut Newton become even more precious. Terry O’Neill for example only had 24 exposures per film in order to get that one shot, mostly rushing behind the scenes of filming, so he had to make that work. In some ways the accessibility of smart phones and the sharing of images makes artwork less exclusive, but generally it benefits the gallery and artist, as it’s easier to have a wider reach through social media for example.”

So is there a trend away from conceptual art, back to traditional aesthetics, and can visual art still be ‘cutting edge’ when it’s challenged by other genres such as video and performance art? “I do believe there has been a trend back to the skilful traditional aesthetics, especially when looking at the re-emergence of the popularity of figurative art” says Emma. “For example, our current show MUSE by Mark Demsteader showcases an unimaginable level of skill in capturing the human form and a Victorian depiction of female beauty but with an abstract twist. It explores time, identity and movement and ignites a pre-Raphaelite renaissance in a world obsessed with conceptual art.”

Other artists promoted by Box Galleries include Lauren Baker, whose neon kinetic sculptures explore themes of conservation and our relationship to animals; and the Connor Brothers, pseudonym for British art dealers James Golding and Mike Snelle, who put a unique slant on popular paperback artwork.

“I have worked with Lauren for a number of years and have held two sell out solo shows, with another one planned for 2020” says Emma. “Her consistency of creativity and quality and the combination of neon works, prints with soulful and positive mantras allow for really interesting progression and she has been gaining worldwide recognition.”

But do some artists take an easier route, simply recycling ‘found’ celebrity images to satisfy a seemingly insatiable public? “Ever since Andy Warhol used celebrities and pop culture in his artwork, this has become a focal point in the contemporary art scene, and I don’t see that changing anytime soon!” says Emma.

So how should a collector or investor begin to build a portfolio? Is it better to buy what you like, or what you think will be a good investment? “It depends on the reason for purchasing, but I would say it’s mixture of passion and investment” Emma decides. “Some of our clients buy solely based on investment which would mean finding an art consultant that you trust (preferably Box Galleries!) and then basing the decisions on the trajectory of the artist in mind with auction results, their position in the market currently and future potential. But most clients purchase what they like, and the investment potential is an added bonus.”

The Artistic Makeover Of One of London's Most Culturally Significant Hotels