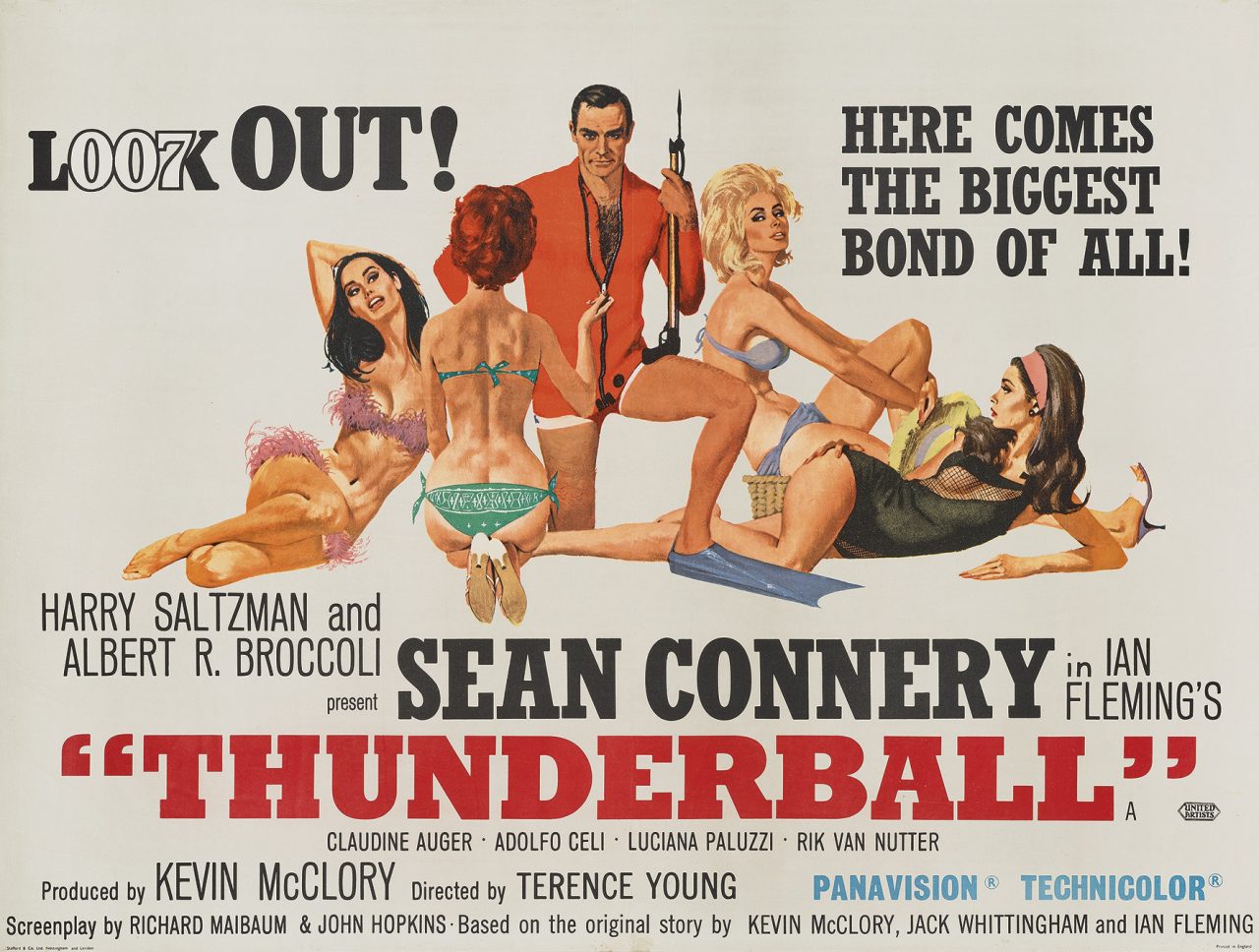 James Bond will be returning – and not just on the big screen. To coincide with the belated launch of No Time to Die, international auctioneers Lyon & Turnbull, in partnership with poster specialists Tomkinson Churcher, are to offer a fine selection of vintage 007 posters as part of an auction of Vintage & Film Posters live online on 19th October.

A total of 15 Bond posters come under the hammer, many of them classics of the genre.

Any poster relating to Sean Connery’s first four Bond films is hugely desirable. Highlights include a British quad sized sheet for Thunderball (1965) by Robert McGinnis, the artist responsible for some of the most iconic Connery Bond designs. It is estimated at £6,000-£8,000 as is the poster for Goldfinger (1964) to the classic ‘gold lady’ design by Robert Brownjohn.

Bond’s unique relationship with Aston Martin is also apparent in a rare promotional black and white poster picturing a DB5 with the red logo ‘Bond Drives an Aston……Naturally’. Made for Aston dealerships at the time of the release of Thunderball in 1965, it is estimated at between £3,000-£5,000.

“As the longest running film franchise, everybody has grown up with 007. The design of each poster was an integral part of the Bond film making process and made a huge contribution to the success of the series. These striking images play an important role in illustrating how Bond has changed since the release of Dr No back in 1962.”

Everyone has their favourite Bond and for many it is Roger Moore. His fans have a unique opportunity to bid for posters signed by him at Pinewood Studios. The collection includes magnificent examples of British quads for The Spy Who Loved Me (1977), Moonraker (1979), For Your Eyes Only (1981) and Octopussy (1983). The poster for Octopussy, that combined the artistic talents of Dan Goozee (who provided the figures) and Renato Casaro (the wide action scene montage) leads this group with a guide of £1,500-£2,000.

The James Bond posters, to be offered alongside other classic movie posters, such as Saul Bass’s iconic work for Hitchcock’s Vertigo, and a collection of Art Deco travel posters by Roger Broders, will be on view at Lyon & Turnbull’s London gallery on Connaught St from 27th September to 1st October prior to the live online auction on the eve of 19th October.

SEE ALSO: Programme Announced for The Other Art Fair London 2021

The Return of The London Art Fair