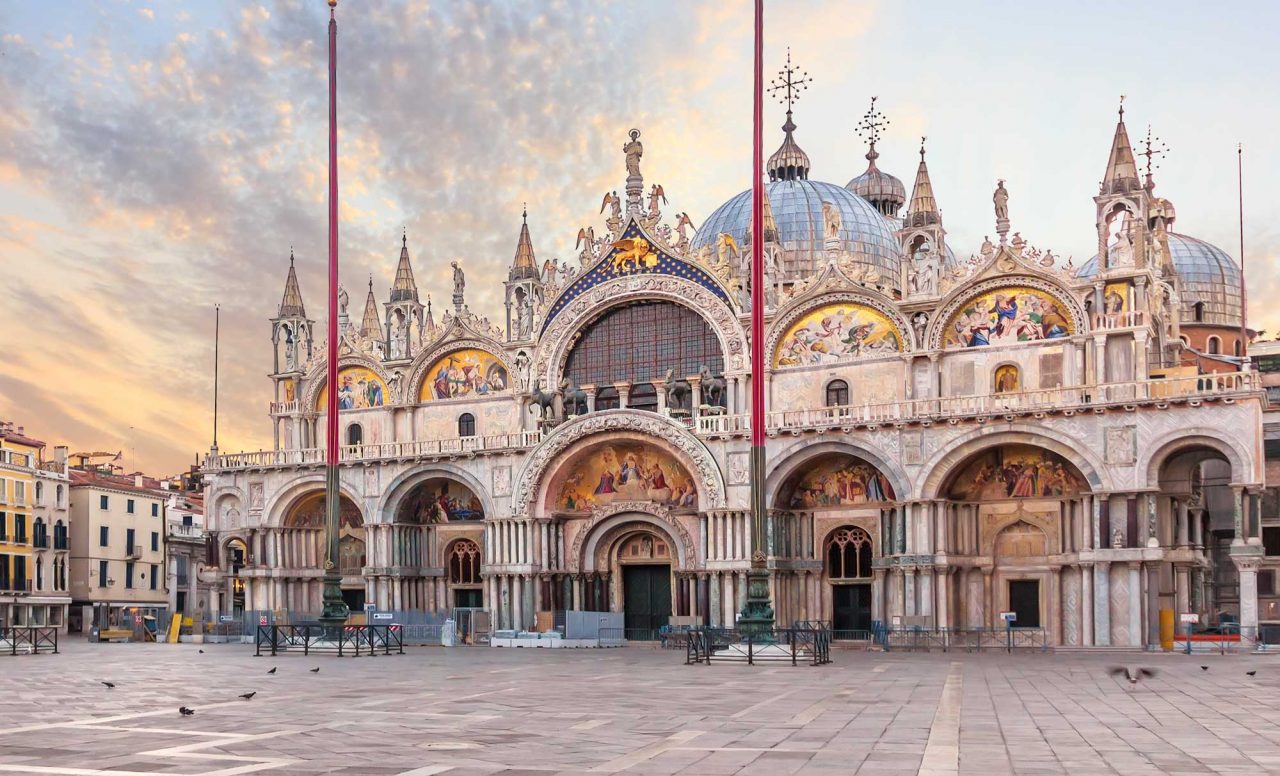 Venice – a Floating World of Art

Venice remains a glittering symbol of civilization in an uncertain world. How does its art reflect its storied history?

Petrarch, the fourteenth-century Tuscan poet, called Venice a mundus alter, “another world,” and the city remains unique in its appeal to the visitor in search of art, culture and history.

Needless to say its physical structure, a cluster of islands connected by bridges and canals, is unusual enough – until the mid-19th century it was possible to reach the city only by boat. But its history is otherworldly too – through 14th and 18th century wars and plague, it retained a stable republican government with a Doge or Duke at its head, and built up astonishing wealth through trade, acting as a gateway between East and West.

It was this wealth which fertilised the ground for Venice’s astonishing art history. New art techniques imported from the East and from Northern Europe included oil painting, which largely supplanted the flat, opaque surfaces of tempera seen in painting such as Botticelli’s Birth of Venus. Oil paints provided a more layered, blended effect with a hint of translucence, seen in the cheeks of the Venus of Urbino by Titian or the clouds in Giorgione’s Adoration of the Shepherds.

In the Early and High Renaissance periods, the Bellini family, the father Jacopo, sons Giovanni and Gentile, and brother-in-law Andrea Mantegna, developed a distinctive style of painting using gorgeous colours, light effects and surface detail. These skills they passed on to Titian and Georgioni who studied in their workshops.

No doubt the inspiration of the surrounding architecture was enough to entrance these painters. The glittering gold and mosaics of buildings such as the 11th century Cathedral of San Marco, its lines reflected in the waters of the canals, must have offered endless images to work with.

In the late Renaissance, Venetian painters introduced new subjects such as nudes and landscapes, and experimented with techniques such as asymmetry. Painters such as Tintoretto and Veronese vied to produce more and more impressive and spectacular works for their patrons, who were happy to spend their fortunes on works which magnified their fame.

Painting Venice is almost like being a restorer, peeling off the layers to find the picture after picture underneath
Arbit Blatas, sculptor, 1908–1999

The churches of Venice remain its most spectacular sights, and the location of many of its most impressive works of art. Tourists will find many churches containing exquisite artworks are free to enter, but opening times can be unpredictable; a tourist pass will give access to churches which charge, but have more reliable opening hours.

The altarpiece at San Zaccaria is one of Bellini’s most serene works, depicting the Virgin and child under a golden canopy and flanked by four saints while an angel plays the viol at Mary’s feet. It is still set in its original marble frame which is repeated on the canvas by the artist’s own painted pilasters, and set so that the sunbeams from the clerestory fall directly onto the painting. (In some churches sepulchral darkness is maintained, while tourists are invited to put money in a slot to activate a couple of minutes of lighting).

The main altar of the Frari church is dominated by Titian’s Assumption, and in the Sacristry is Bellini’s great triptychs of a Madonna and Child flanked by four saints, in an elaborate gilded frame. Unmissably, San Sebastiano contains Veronese’s frescos, ceiling paintings and altarpieces, while San Giorgio Maggiore boasts Tintoretto’s The Last Supper and The Fall of Manna. No visit to the Rialto bridge should miss the nearby San Giovanni Crisostomo, with its altarpieces by Sebastiano del Piombo and Bellini, while the Basilica San Marco contains some 8,000 square metres of glittering mosaics depicting Biblical stories and figures.

But Venice is of course a modern city as well as an ancient one. In recent years new galleries opening include Russian billionaire Leonid Mikhelson’s V-A-C Foundation, Francesca von Habsburg’s TBA21 foundation in the Chiesa di San Lorenzo, and Gallery Alma Zevi close to Palazzo Grassi. And, for six months every two years, the city hosts the art exhibitions of the Venice Biennale, attracting creative spirits from all around the world. The main venues are the Arsenale and Giardini, while churches, palazzos and music academies are co-opted for a plethora of collateral events.

Due to the coronavirus pandemic, 2020’s international architecture show has been moved to 2021, while the next art exhibition will also be delayed a year, to 2022. Swedish curator Daniel Birnbaum, who organized the Venice art biennale in 2009, says, “It just shows the magnitude of the crisis that has changed everyday life on the planet.” The challenge of making the Biennale relevant will, he says, be an interesting one. Venice, eternally reflecting the wonders of art, nature and spirituality, will no doubt rise to the occasion. 

An Art Insider's View of the Year From Matthew Israel