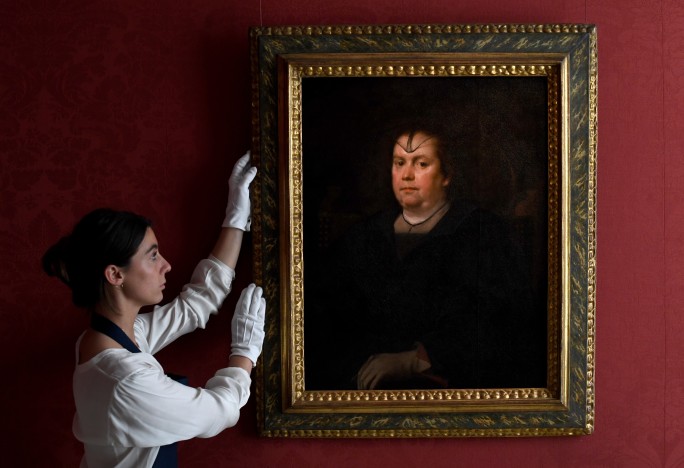 Diego Velázquez’s long-lost portrait of Olimpia Maidalchini Pamphilj will be auctioned by Sotheby’s on the 3rd of July as part of its Old Masters Evening Sale.The painting was lost for three centuries after its last reported appearance was in 1724; however, in the 1980s the painting was sold under a different name and eventually brought into Sotheby’s Amsterdam office.

The mystery behind the lost painting doesn’t end there – an unusual cypher was found hidden at the back of the painting, which prompted an investigation by Sotheby’s consultants to pinpoint its origins Sotheby’s art consultants confirmed the painting to be the original painting of Olimpia Maidalchini Pamphilj by Diego Velázquez.

Born in 1591, Olimpia Pamphilj was a sharp antithesis to 17th century Rome’s traditional conceptions of femininity and vision of the “virtuous woman” of chastity, fidelity, obedience and piety. Otherwise known as “Papessa” or “Lady Pope”, Olimpia Pamphilj began to refute Rome’s patriarchal vision of femininity and exclusion of women from both the political and social sphere from an early age. At the age of 15, Olimpia defied her father’s desire to place her in a convent against her will and married the wealthiest bachelor in town. Tragically, she found herself a widow three years later, yet also the sole heir to her late husband’s fortune.

Nonetheless, in 17th century Rome, wealth alone would not suffice and in 1612 at the age of 21, Olimpia traded her wealth for the title of a Lady by marrying the 51-year-old Pamphilio Pamphilj. She had repudiated the confines of class to become the “donna” or the Lady of a noble house.

Her rejection of societal norms did not stop there, and Olimpia soon became the advisor of her dithering brother-in-law, 38-year-old Giovanni Battista Pamphilj. She applied all forms of subterfuge and bribes to promote her brother-in-law to the position of cardinal, succeeding in 1629. A second bribe to a more influential cardinal in 1644, during a conclave decision that had reached an impasse, led to Giovanni Battista ascending into papal role and his title became Pope Innocent X.

In spite of the rise in position and change in titles, he still retained his prior, indecisive qualities. His papal duties as Pope were therefore mostly taken on by Olimpia, which countless cardinals both opposed and ridiculed.

Her presence in papal affairs earned her the title of a “Papessa” or female Pope, while her illicit romance with her brother-in-law labelled her a Pimpaccia or “a woman of sins” in Rome. Olimpia’s adoption of her brother-in-law’s papal duties were beyond selflessness or piety, and rather a covetous desire to accumulate extra wealth.

She accepted large sums of money as bribes from anyone wishing for a favourable opinion from Pope Innocent X.  Cardinals, however, were more displeased by Olimpia’s female influence over Innocent, than the acceptance of bribes and her overall corruptness.

The Vatican’s Cardinals subsequently described her as a “witch” and while, it is easy to typify Olympia’s character as the female manipulator archetype or the Lilith of 17thcentury Rome, it is crucial to equally consider the abject status of a now twice-widowed woman in Roman society, following Pamphilio Pamphilj’s death in 1639.

As for Pamphilio’s brother, Pope Innocent X, he succumbed to age-related health problems at 80, though just before his death Olimpia had persuaded him to shift the Vatican treasury to close to his bed. Innocent ultimately became a victim of his short-sighted love for his sister-in-law, yet that is not to say he was entirely “innocent” in his illicit affair with his brother’s wife. After his death, Olimpia rejected the Roman decree of the closest next of kin paying for the funeral and instead, Innocent’s body was stored in a closet at St. Peter’s Cathedral, until a servant out of pity brought him a coffin.

Born Fabio Chigi, Pope Alexander VII was Innocent’s successor and unlike Innocent, was not an avid fan of Olympia. Nonetheless, before he could launch an investigation into the disappearance of the treasury and Olimpia’s corrupt methods in the Vatican, the bubonic plague hit Italy, devastating countless cities. Olympia herself fled with the gold from the treasury and settled into the remote village of San Martino al Cimino in Viterbo.  Regardless, even she, the greatest female ascender to power and wealth in 17thcentury Rome, was not impervious, and Olimpia Pamphilj, described by commentators as the ‘Baroque era’s feminist’, died of the plague in September 1657.

Velázquez’s painting of Olimpia Pamphilj was completed between 1649 to 1650 and will be auctioned by Sotheby’s London as part of its Old Master Evening sale on July 3rd. The estimate is £2-3 million. The painting will be available for public viewing from June 28thof June to July 3rdof July at Sotheby’s.