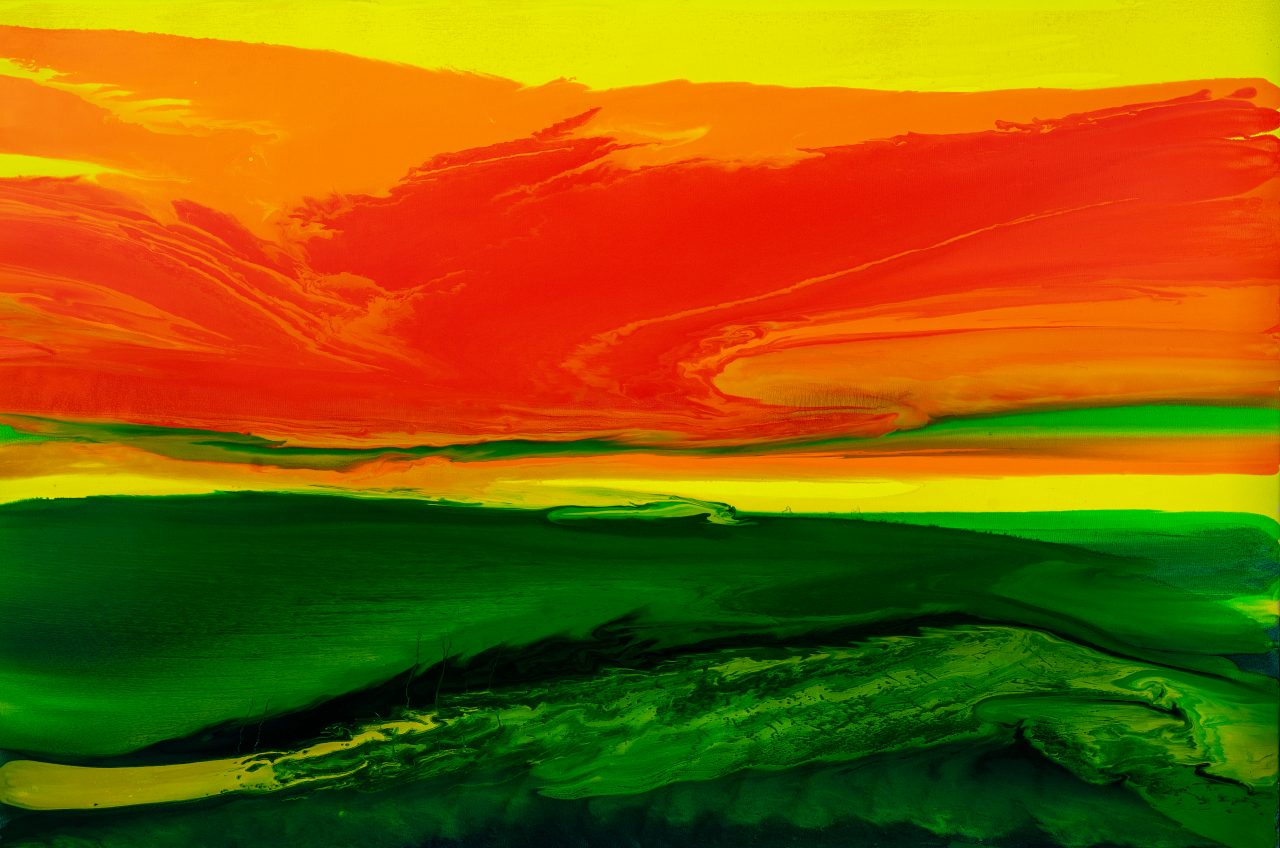 To run alongside London’s Frieze Week – one of the world’s most exciting and influential celebrations of contemporary art – leading curator Ellen Nash is to present a new exhibition of artworks by acclaimed artist Georgii Uvs. (Top of page – Georgii Uvs, Mesozoic #4, 2016, oil on canvas, 140x210cm).

Taking place at The Vinyl Factory between 13th  – 17th  October, Abstract Intuitionism follows on from the artist’s hugely successful UK debut show at Saatchi Gallery and retrospective at Gallery 8 in 2019, and explores a newly-founded concept that has never been used or embraced before in the art world.

Georgii Uvs is an acclaimed Russian-born visual artist based in London. He began painting at the age of 17 and after graduating with a degree in Geology, he pursued his second degree at Moscow State University of Education, Department for Graphic Arts. Georgii Uvs, like all artists, is a reflection of the era he lived in and his art is a depiction of his time.

Georgii Uvs’ profound artworks reflect his experimentation and commitment to his philosophical beliefs and fascination of intuitiveness within artistic activity. “Intuitionism” refers to a movement in philosophy that recognises intuition as the most reliable means of understanding. As a modern-day artist born into a world with several millennia of art history and genius of past experts, Georgii Uvs believes that only philosophy can relate and create art in the 21st Century.

For the first time in the history of fine art, an artist does not dictate, but is instead led by the nature and freedom of colours. As part of the artist’s unique ‘live’ painting technique, he pours paint onto un-stretched canvases laid horizontally on the studio floor, relying on the uses of different densities of paint and pigments which he manipulates in different ways without ever touching the surface of the painting. Uvs’ abstract works are a result of his masterful techniques that he has developed over four decades with each work taking 3-4 years to dry. Both eternal and exclusive, Uvs’ works take on a life of their own and cannot be copied or repeated.

These works in Uvs’ recent scope of work showcase how the artist began to prioritise sensual and intellectual intuition in his work, and as such has since gone on to write the first manifesto on the subject of Abstract Intuitionism. Georgii Uvs comments: “The artist no longer dictates. He obeys the colors, existing only to serve them and enhance their strength. Artwork is no longer intended to merely portray objects or emotions, instead it urges viewers to tap into their repressed subconscious, summoning man’s primal sensorial system, thereby revealing a collective understanding of the archetypal visual language.

A reflection of his era, Georgii Uvs’ art is a depiction of his time; it was in 20th Century England where intuitionism became an independent trend in philosophy and it was this movement that has inspired the artist’s unique qualities within his art which has paved the way for “Abstract Intuitionism”.

Through Abstract Intuitionism Georgii Uvs uses philosophy as a vehicle for artists to truly appreciate the artistic paradigms. By working within a new framework, this new exhibition shows how ‘concept’ prevails over ‘form’ while illustrating how his art renders him a philosopher.

The Curator of Abstract institutionism, Ellen Nash, says: “Georgii UVS’s spontaneous paintings urge viewers to delve into themselves and reach deep within the subconscious, to uncover primitive sensations and reveal the collective sense of the archetypal visual language. Uvs’ art explores freedom, divergence and convergence, and illustrates a powerful myriad of raw emotion and behaviour that possessed his body and soul during the act of creating.”

The Dalmore Decades Secures Over £800,000 at Sotheby’s