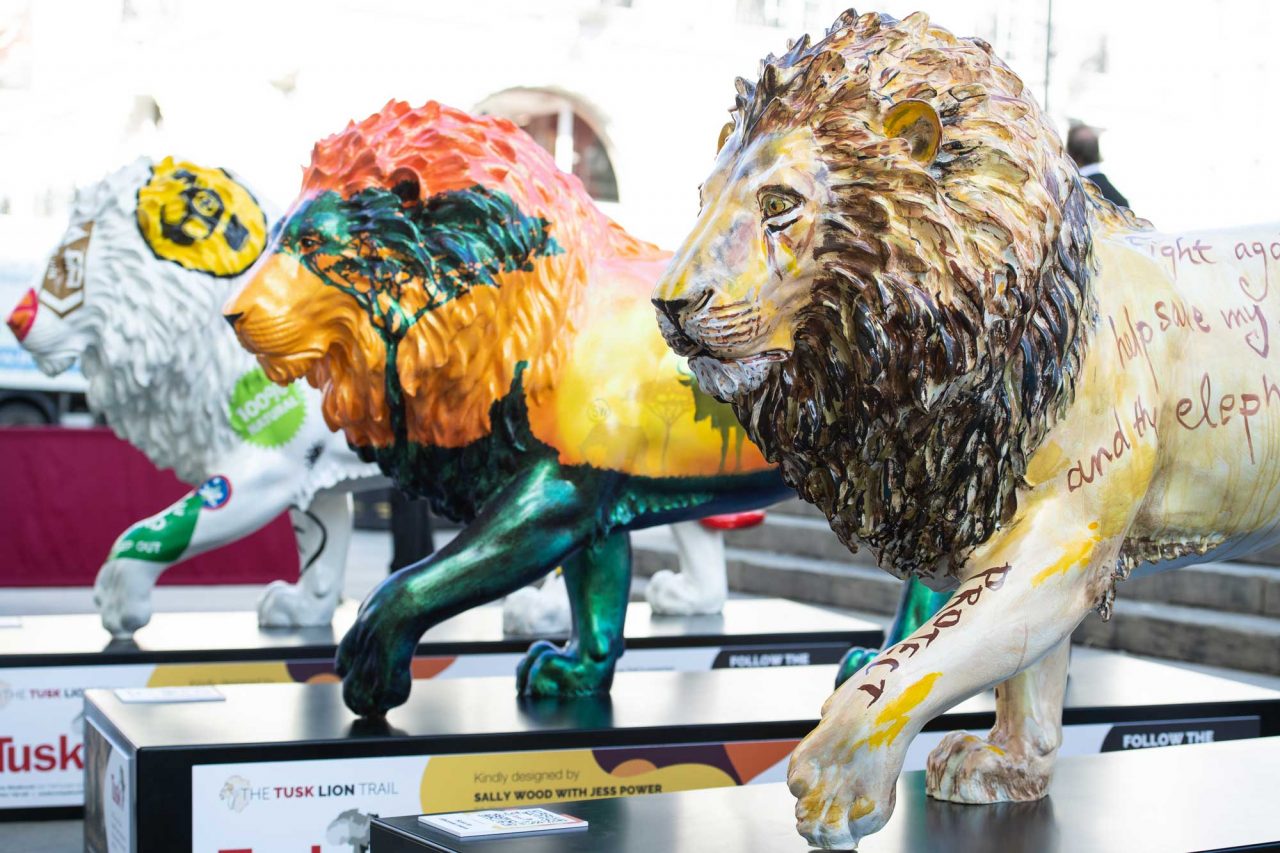 A pride of life-sized lion sculptures curated by an array of globally renowned celebrities and artists will be auctioned in support of African conservation.

Following the success of the Tusk Lion Trail, which saw a pride of lion sculptures take to the streets at iconic landmarks worldwide, Tusk is proud to announce the lion artworks are set to be auctioned to the public. All funds raised via the charity auction will support the work of Tusk and its partners in protecting species and empowering communities across Africa. Three years ago, Tusk raised £750,000 with its Rhino Trail and has already surpassed this total, with The Hamptons Pride in the USA, delivered in partnership with the African Community & Conservation Foundation, raising $1 million.

The individually curated life-sized lion sculptures designed by internationally acclaimed artists, will be available to preview via the world’s largest online art marketplace Artsy from 28th October. The pride will be sold both via a live and silent auction, with the majority on display at the famous Bonhams Auction House (New Bond Street) in London from 8th November 2021. For any bidders unable to attend, the lions will also be available to bid online via the Artsy platform. The silent auction will close online at 9.00pm on 10 November 2021. Please see below for which lions will be part of which auction.

Each sculpture highlights the magnificence of lions, threats to their existence and the people and solutions working for their survival – raising awareness for conservation efforts across the African continent. Internationally recognised faces including Rolling Stones guitarist, Ronnie Wood, wildlife photographer, David Yarrow, artists Ian Davenport, Gavin Turk, Helen Downie and David Mach, rugby legend Richie McCaw and actors John Cleese and Noel Fielding have all collaborated to craft their own unique artworks which will all be available to purchase.

The vulnerability of African conservation has never been more prominent due to the devastating impact of COVID-19, significantly affecting the economy, wildlife and tourism industries of Africa. Donations have never been more crucial to save these iconic big cats known as the ‘King of Beasts’, central to human culture since our very own evolution.
Tusk is enormously grateful to lead global partner DHL and global co-sponsor ISPS Handa for their generous support and without whom this hugely popular sculpture trail would not have been possible. The Charity would also like to acknowledge the many companies and foundations who kindly sponsored the individual lions whilst on public display around the world.

Further information can be found at https://www.tuskliontrail.com/auction

LIONS AVAILABLE FOR LIVE AUCTION INCLUDE:

LIONS AT THE SILENT AUCTION: