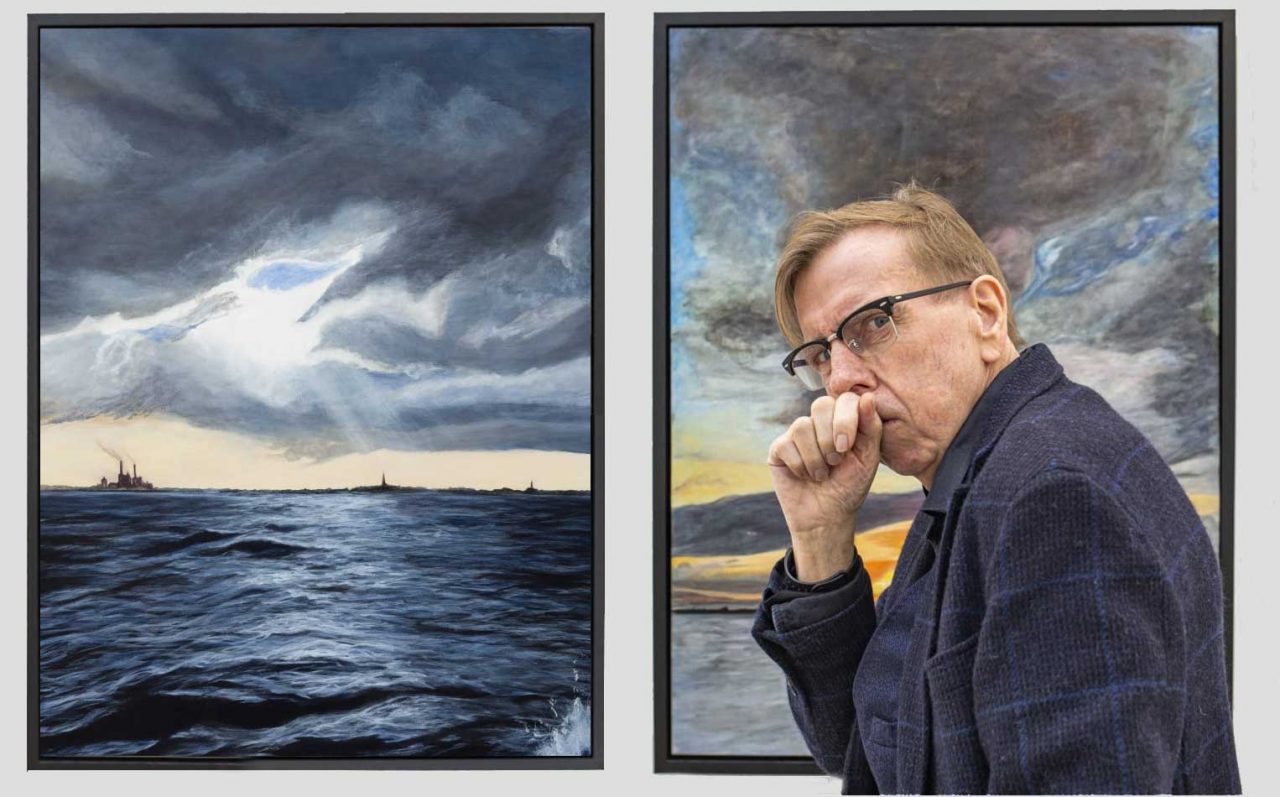 As an actor, Timothy Spall needs little introduction, but since his thorough preparation for his award-winning role as Samuel Turner in the Mike Leigh film Mr Turner in 2014, Spall has made his own foray into painting.

His experience provided the spark and confidence to set himself a rigorous and public challenge of an exhibition, Out of the Storm, to be held at Pontone Gallery in London from 18th June to 18th July.

Mounting such an exhibition, he says, was not done lightly. The teenage Spall had to choose between “art, acting or army”. Here we see an unexpected chance to revisit a missed opportunity.

Timothy Spall was brought up by the Thames in Battersea, the dark river a constant presence, a reminder of the ebb and flow of far-flung connections and possibilities. In later life he sailed his sea-going barge and developed a further acquaintance with the ocean. He is a man in motion, scanning the distant horizon for material.

Timothy Spall is an autodidact. He is a man who is constantly enquiring into, and schooling himself in, the ‘serious diversions’ of life. One such pursuit is painting.

Out of the Storm is a compact and thematically-coherent sequence of pictures. Timothy Spall offers up a series of brooding land and seascapes, uniform in size, that are episodic documents of the painter’s close attention to the world around him. The pictures are a diary of a travelling life, recording real places, the where and when, glimpsed, then fixed, in passing. These are not simple representations, but are heightened in mood and atmosphere. The intensity is ratcheted up. A storm is often brewing, dark shadows fall and modulated light streaks across sky, sea and land.

Spall’s eye alights on significant motifs: a roiling ocean, a sanguine sunset, a stand of twisted trees, a mysterious ruin, dirty scudding clouds. His is a world of elemental churning, punctuated by moments of calm observation.

Spall’s technique is hard-won. He applies himself in a painstaking and disciplined way. He constantly asks himself: “How on earth do I do this?” Stubbornly dealing with the veracity of things and the technical problem of representation, he achieves an authentic sense of a real and immanent presence.

His use of colour is subtle. Skies are tinted with lemon yellows and tangerine oranges, which glow against blue-grey tonalities. He demonstrates a preference for dramatic silhouette graphically picked out in inky-blacks and carbonised blues. Architectural form and detail is finely-drawn. Trees are an intricate network of interwoven tendrils. A more gestural handling of the brush is used to describe sea and sky. Complex layering and vigorous scumbling builds an impression of atmospheric weather effects.

As with his artist heroes and fellow Londoners, Blake and Turner, who saw God in the world they painted, Timothy Spall expresses an animating and sublime life-force, which imbues his subjects with symbolic power and poetic imagination. The paintings convey a sense of reaching out to that which is slipping past. Spall makes landfall, grasps the significant and anoints it in paint.

The Most Valuable Work Of Art Ever Sold in Scotland