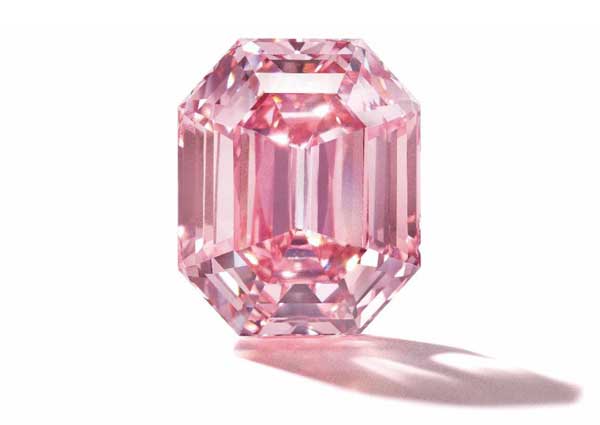 The Pink Legacy Diamond is Set to Go to Auction. Image courtesy Christie's

Weighing just under 19 carats, the rectangular-cut gem is the highlight of the auction house’s Magnificent Jewels sale, which will be held at the Four Seasons Hotel de Bergues in Geneva.

The Pink Legacy diamond descends from the Oppenheimer family—it is currently estimated to fetch from $30-50 U.S. million.

Rahul Kadakia, international head of jewellery for Christie’s, said: ‘The discovery of this previously unrecorded and remarkable diamond will cause immense excitement with collectors and connoisseurs of diamonds around the world.

‘The Pink Legacy will be exhibited on a global tour prior to being auctioned on 13 November…its exceptional provenance will no doubt propel it into a class of its own as one of the world’s greatest diamonds,’ he added.

The Fancy Vivid Pink stone is a truly remarkable find. It has been given the highest diamond colour rating—‘Vivid’—by the Gemological Institute of America (GIA) and is classed as a Type IIa diamond.

Type IIa diamonds contain little to no nitrogen, account for less than two percent of all gem diamonds and are the most chemically pure in their makeup.

The Pink Legacy, weighing exactly 18.96 carats, is one of a handful of Vivid Pink diamonds weighing over 10 carats to be offered at auction.

According to Christie’s auction house, most pink diamonds of this colour weigh less than a carat.

Other notable Vivid Pink diamonds to be offered at auction include The Pink Promise, an oval-shaped Fancy Vivid Pink gem weighing of 15 carats which was sold by Christie’s in November 2017 for $32 U.S. million.