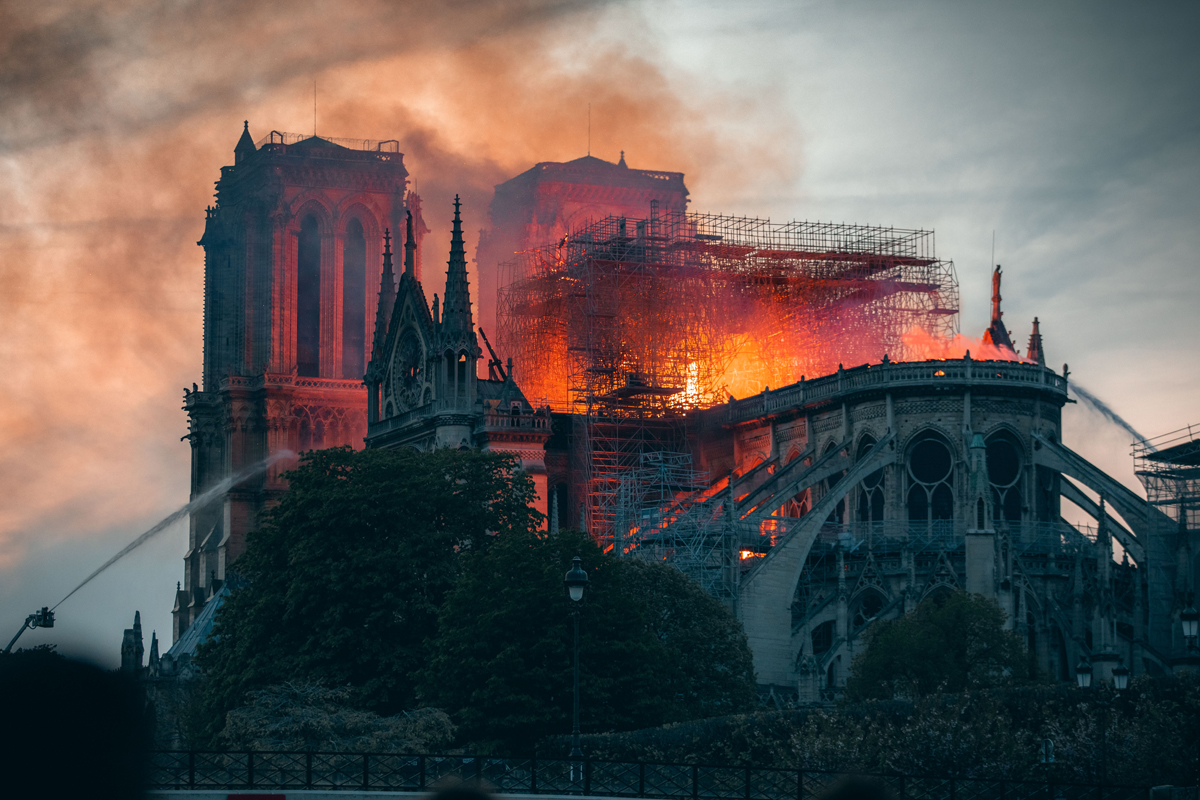 The fire at Notre-Dame de Paris sparked concern throughout the world as one of the most historic landmarks in Europe went up in flames. But how much is truly lost and what precious artefacts were saved by careful planning?

On April 15th 2019, one of the most devasting fires ever to be seen at a heritage site broke out at Paris’ beloved Notre-Dame cathedral. The 850-year-old gothic masterpiece is both an inspiration to artists worldwide and a repository for some of the most revered religious and artistic artefacts.

Beyond the tally of what was lost and what was saved, hard questions have to be answered about responsibility for the costs of insurance cover and restoration work. The French state acts as its own insurer for religious buildings and for much of the contents—but what of Les Trésors de Notre-Dame?

This collection of almost 2,000 artefacts is at the core of the responsibilities of  Michel Honoré, Directeur Branche Fine Art et Fraude of insurance specialist Sedgwick.

Cathedral staff had long established an evacuation process starting with the most important relics, moving them first to the Paris Town Hall, then to the Louvre. As firefighters tackled the blaze, a human chain entered the cathedral with one aim: to save the items that could never be replaced. Priority was given to the most precious and significant pieces, removed by firefighters risking their own lives. Among the pieces the human chain saved are the three relics which are sacred to Christians all over the world.

According to three of the Gospels, the woven Crown of Thorns was worn by Jesus during his crucifixion. Making its way from Jerusalem to Byzantium, it is thought to have been in France since 1238, when it was offered to King Louis IX, and it has been at Notre-Dame cathedral since the French Revolution. Now kept in a gold-decorated crystalline reliquary designed in 1896, the Crown consists of thorns from the jujube tree, plaited with rushes.

The reliquary said to contain a fragment of the cross on which Jesus was crucified, as well as one of the original nails, was also saved. The nails were thought to have been passed to France in the year 799 by St Helena.

Other religious treasures saved include the tunic of St Louis, a simple garment said to have been worn by the saint when bringing the Crown of Thorns to Paris during the 13th Century.

But a great deal was saved by sheer luck; 16 three-metre tall copper sculptures of the 12 apostles and four evangelists had been removed from the top of the cathedral for cleaning a month before the fire.

Fortunately, the stone flying buttresses and the main structure of the nave seem to have protected much of the cathedral from the ravages suffered by the timbers. Despite the collapse of the spire, the statue of the Virgin and Child known as Our Lady of Paris luckily escaped unscathed (see Michel Honoré’s photo, below).

Less likely to have survived intact are 17th and 18th-century paintings depicting religious scenes, including Visitation by Jean-Baptiste Jouvenet, which may have been irreparably damaged by smoke and water.

As for Le Trésor (literally, the ‘Treasure’) of Notre-Dame, held in the sacristy at the southern end of the aisle, it was far removed from the seat of the fire. Nonetheless there were concerns about the possibility of smoke and water damage.

The day after the fire, in response to a formal assignment, Michel Honoré of Sedgwick assembled a team of specialists in sculpture, stained glass, fabrics, paintings and ancient musical instruments to assess the state of the treasures within the church.

Honoré reported that although 90 percent of the irreplaceable treasures were saved, masterpieces within the cathedral have been damaged, if not lost altogether. He said: “In the end, because of vital safety work on the cathedral’s vaulted ceiling, transept and apse, it was eight days before a selected group of seven were authorised to enter.”

His first impressions on entering the building were promising; he reported “Whereas most surfaces after a fire of such intensity would be covered with black soot, here they had been rinsed clean of all traces by water cascading down inside after firefighters had concentrated on saving the structure of the edifice re and controlling smoke levels… (we had) the distinct impression that the disarray inside the building was limited when just the opposite might have been expected”.

Michel Honoré continued: “Our ongoing work consists of examining and checking the works of art now being stored at the Louvre museum in Paris city centre.

“Concerns about their condition in storage continue owing mainly to the damp atmosphere that prevailed in the cathedral as a consequence of the sustained use of firehoses and the increased risk of contamination from melted lead on the roof.”

More obvious damage was done to the structure of the cathedral itself, with the massive timbers of the attic and the spire suffering the most. Perhaps the most heart-breaking moment of the fire was the collapse of the 91.44m (300 ft) spire, which was added in the 19th century.

The Grand Organ is probably the most famous church organ in the world. With five keyboards and almost 8,000 pipes, it traces its origins to the 1400s, though the current organ is mainly from 1868 and had been added to and improved many times. Though it survived the fire substantially intact, it was covered in layers of soot and may be difficult to restore.

Yet the Rose Windows, perhaps the most iconic features of Notre-Dame’s interior, remain untouched. The oldest, situated at the front of the church, dates back to 1125, although none of the original glass remains in the frame.

Even before the fire was extinguished, promises of donations to rebuild the icon started to pour in, with €850 million being raised in the first 48 hours after the fire, much of it from France’s luxury goods conglomerates.

The irony was not lost on staff and supporters who had long been struggling to raise funds for urgent repairs and long-term restoration.

Saved From The Ashes?

Since the fire in April 2019, President Macron has set an ambitious target of restoration in five years, and architects have rushed to propose plans for the gothic masterpiece. Many have been traditional, others wildly inventive and perhaps intentionally unrealistic. One plan included converting the cathedral into a sanctuary for the homeless with a roof greenhouse, while another suggested a stained glass roof, complete with matching stained glass spire.

Philippe Villeneuve, the architect in charge of the restoration of Notre-Dame, said: “For me, not only must you redo the spire, but you must recreate it exactly. We’re bound to the Venice Charter, which requires that we restore historic monuments in the last known state”. He told broadcaster RTL:  “Either I restore it identically… or they make a contemporary spire and it will be someone else [doing it]”.

A vote in the Senate in May supported this view, but General Jean-Louis Georgelin, in charge of reconstruction, is in favour of a contemporary design, and said the chief architect should ‘shut his mouth’.

Yet restoring the structure identically presents seemingly impossible challenges; the wood used for the now-destroyed roof and frame, which also supported the standing of the spire, was over a thousand years old. The enormous timbers came from trees thought to be 400 years old in 1160, making them the oldest in the cathedral. No similar trees now exist, so replacing the beams is simply not an option, according to Bertrand de Feydeau, vice president of preservation group, Fondation du Patrimoine—indeed, in the words of The Goon Show, ‘you just can’t get the wood’.

Michel Honoré of Sedgwick concludes “Beyond actual management of the claim itself, it is taking part in the conservation of our national heritage that makes us most proud. For the Sedgwick Fine Arts team and our love of fine objects and culture, it is an adventure that gives real meaning to our profession.”

Whatever the outcome, the cathedral and its precious cultural and religious contents will undoubtedly remain as significant a treasure of world culture as ever.

This feature was originally published in the latest edition of Arts&Collections, which you can read here

Banksy: How A Vandal Broke The Mould of British Art