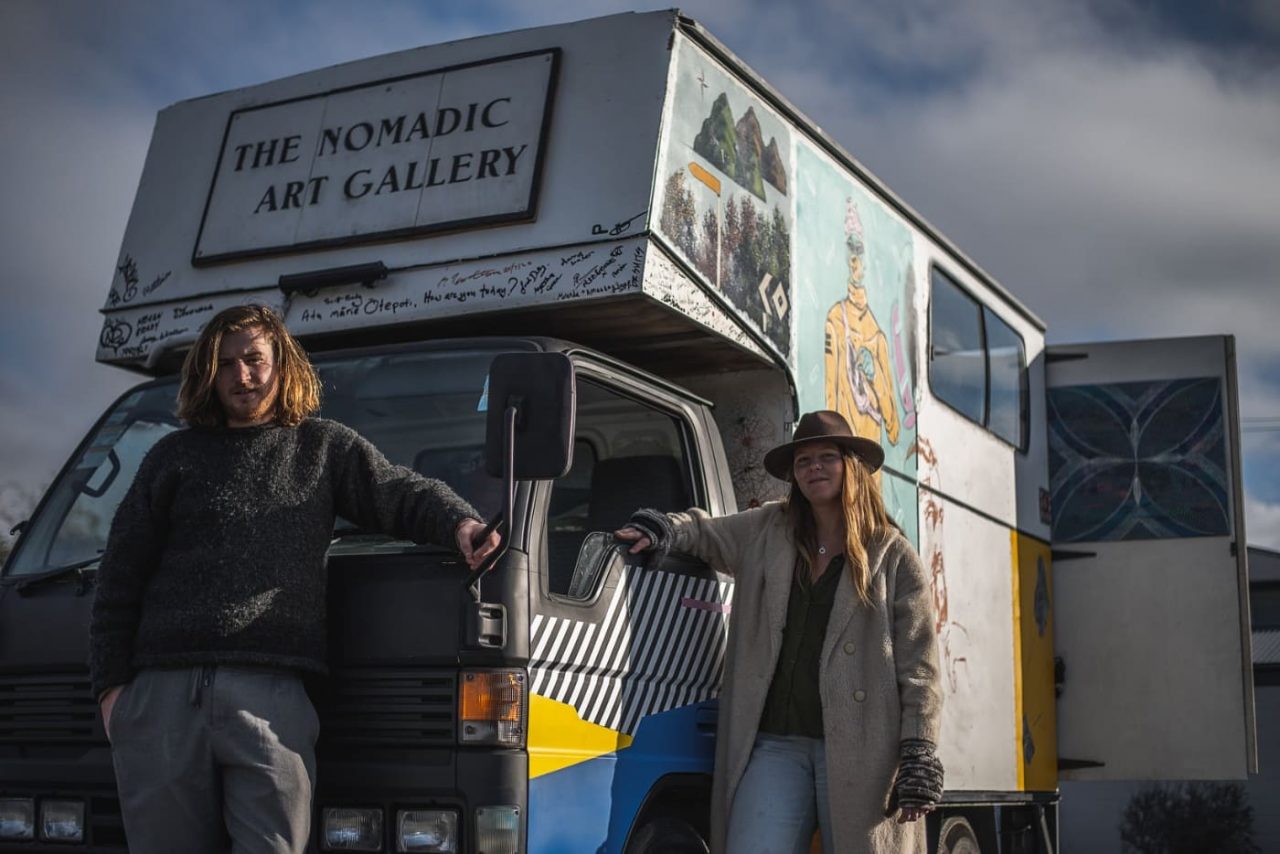 Marking its move from a mobile public art and research project, The Nomadic Art Gallery, founded by Arthur Buerms and long-time partner Gie in 2020, unveils its first transitional gallery space in Leuven, Belgium.

Building on a cyclical model rooted in the notion of nomadism, the initiative sets forward a new gallery model, which ensues through two alternating phases. The first is an in-situ immersion within an underrepresented art scene, during which Arthur and Gie invest a mobile vehicle to conduct research in the given location, the latter ultimately becoming a public art project. The second phase is set in a transitional gallery space – a temporary location in Europe which changes with each exhibited art scene and where the duo initiates a dialogue between their research and the European contemporary art scene, through a program of both physical and online exhibitions.

Opening on October 22, 2021, the gallery presents its inaugural focus on the established and emerging New Zealand art scene, following Arthur and Gie’s investigation into New Zealand’s artistic production throughout 2020. The first of a series of thematic exhibitions, off- and online, to take place over the coming months, HOP HIP showcases New Zealand artists Philip Trusttum (b. 1940, New Zealand), Ahsin Ahsin (b. 1983, Cook Island), and Marcus Hipa (b. 1980, Niue Island) in dialogue with Dany Tulkens (b. 1953, Belgium), while the online exhibition simultaneously on view Something Possible offers a comprehensive digital survey of experienced New Zealand artist Kim Pieters (b. 1959, New Zealand)’s oeuvre over the last decade.

The inauguration of The Nomadic Art Gallery’s new space is rooted in its story, one which cannot be separated from that of its founders. With a shared passion for exploring, and pushing, the boundaries of art, Arthur and Gie lauched The Nomadic Art Gallery on the notion that art evolves with its context – as do how, and by whom, it is perceived.

In early 2020, turning their attention towards a seldom presented New Zealand art scene and to how their project could contribute in shedding light onto it, in particular to Western audiences, they set off for New Zealand. Following a fortuitous encounter with Auckland-based art collector, trustee of New Zealand’s reputed Arts Foundation Te Tumu Toi, and ongoing supporter of their project Kent Gardner, what started as a converted truck quickly turned into a mobile art gallery, in which the duo lived and exhibited for a year. The pro bono, crowdfunded curatorial project itself, based on its temporary life cycle, unfolded as 16 exhibitions across 7 locations, as Arthur and Gie travelled 36,000 kilometres across the country, involving over 200 local artists, in constant interaction with their expanding public.

In 2021, with a year of discoveries behind them, Arthur and Gie returned to Europe, where they proceeded to the second part of The Nomadic Art Gallery’s New Zealand chapter – the first of, what they had now understood, many cyclical focuses onto rarely discussed art scenes across the world.

HOP HIP brings together New Zealand artists Philip Trusttum, Ahsin Ahsin, and Marcus Hipa in tandem with Belgian sculptor Dany Tulkens, as they explore the wavering tension between music and visual art. As visitors circulate the four different gallery spaces in the show, they visually listen in turn to Baroque, Russian classical folk, experimental noise, vaporwave – and hip-hop. As the artists jointly dissect the rhythmic cadence inherent to artworks in light of musical genres, the gallery grows into a hybrid entity, announcing the deterritorialization of cultural and physical space.

A prominent driver in its conception, critically acclaimed New Zealand figurative expressionist artist Philip Trusttum lies at the heart of the exhibition. Music plays a fundamental inspirational part in his work, in turn emanating from it in a sound-to-sight back-and-forth present throughout his Pictures at the Exhibition series (2001—2004) as in his ongoing Selfies and Masks series. Referencing a remarkable diversity of influences, from Medieval illuminated manuscripts and Japanese woodwork prints to comic book motifs and indigenous African huts, his brushstrokes, fired by music, result in a kaleidoscopic choreography of line, pattern, and luminous colours.

While Ahsin Ahsin and Marcus Hipa build on inspiration from jazz, hip-hop and vaporwave in their ability to elicit a sense of community, calling to cultural authenticity and the more political dimension of their work, Trusttum’s work most resonates in opposite, yet complementary, tempo to that of Dany Tulkens. The palpable sarcasm in Trusttum’s work is channeled to Tulkens’s seemingly dark sculptures, shedding to light a concealed lightheartedness which only the differing musicality in the works could extract. Addressing this exchange between the two artists, Arthur and Gie explain:

“By offering a temporary snapshot onto a specific art scene at a given moment in time, The Nomadic Art Gallery acts a bridge between continents, a platform for New Zealand artists, in this first iteration, to share broadly the poorly known discourses that feed their creation – fragmented as they may be, all reclaiming their voice and identity on an international scale – all-the-while bringing to light new dimensions to seemingly understood European artists’ work.”

Arthur and Gie look ahead to what’s to come saying: “A transitional non-space, undefined in time, The Nomadic Art Gallery is at the border between the public and the private, at once art project and gallery space, with the aim of setting forth the potential for new gallery models to emerge – each unique, reflecting art’s inherently flexible, dynamic and diverse nature – and its ability to endlessly manifest itself in various formats, in various spaces, to various audiences.”