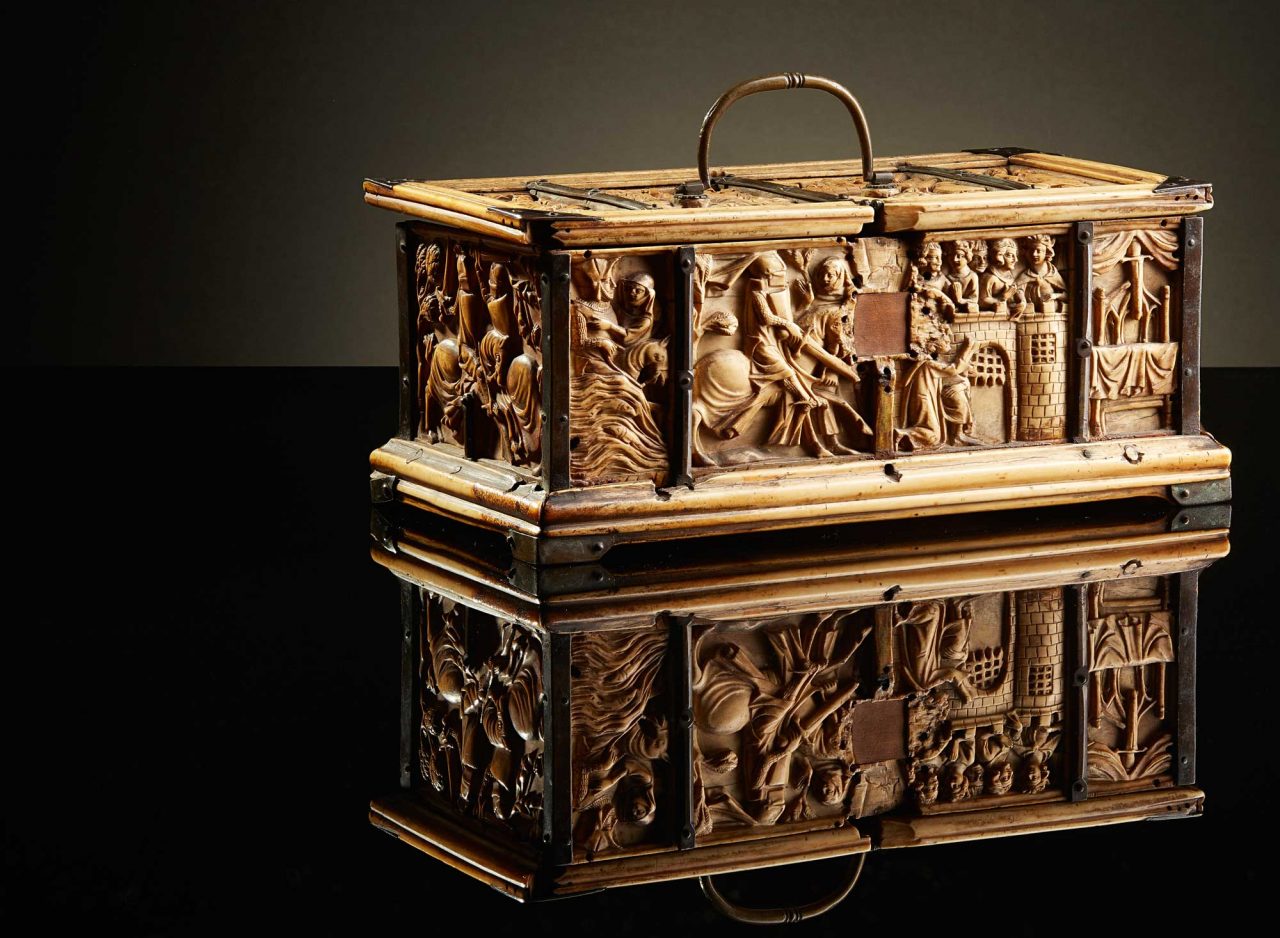 A spectacular week of auctions at Lyon & Turnbull culminated in the sale of the most valuable work of art ever sold in Scotland.

The Five Centuries sale in Edinburgh on May 20th included a previously unrecorded 14th century French gothic casket (seen above) that came for sale from Tornaveen House in Aberdeenshire, where it had been for four centuries. In ten minutes of bidding drama across multiple phone lines, the price began at £50,000 and ended at £1,455,000 (including premium).

This is one of only nine similar examples known – most of the others are in important museum collections. Probably made in a Paris workshop c.1330, it is intricately carved in relief with scenes from courtly literature including the Arthurian legend of the quest for the holy grail and the medieval romance of Tristan and Isolde. The lid presents unusual scenes of ‘wild men’ fighting to capture a castle – a popular allegory for the winning of a lady’s heart.

Although previously unknown to scholars, the casket comes with an impeccable provenance. Its history in the Baird family of Auchmedden can be traced back to 1615: it is mentioned in the archives in connection with Thomas Baird, the son of Gilbert Baird (1551-1620), who became a friar of in a monastery in Besançon, Burgundy. The owners believed Thomas Baird had (as claimed in a letter from Baird’s uncle) made the casket in the 1600s and were thus surprised to learn it was three centuries older.

The seller’s commented, “It was fascinating to discover the real story behind the age of the casket, given that our family history of it only went back to the early 17th century – well done to Lyon & Turnbull for the careful research carried out into its age and rarity. We have been left stunned and amazed by the result.”

Specialist Douglas Girton, Head of Fine Furniture & Works of Art, shared in their delight, “From the moment it came in for research, our team knew it was something rare and special, and the enthusiastic reaction to it from collectors and museum professionals only re-enforced our beliefs. What makes it even more special for us is that it has been in the same Scottish family since the early 17th century and until it appeared in our catalogue it wasn’t known to exist. As auctioneers we all live for that moment when a long-forgotten treasure comes to light. The result is a career highlight.”

The previous high for a single lot sold at a Scottish art auction was £1m bid for a bottle of The Macallan 1926 Fine & Rare 60 Year Old (Whisky Auctioneer, Perth, February 2021).

Lyon & Turnbull’s ‘Historic Week’ included objects spanning 1000 years from a number of named private collections. The netted 650 lots enjoyed a selling rate of 85% and a total of close to £3m.

A huge porcelain breakfast service made to welcome Queen Victoria and Prince Albert on their first visit to Scotland in 1842 sold for £37,500 as part of 43 lots of property from the Earls of Breadalbane & Holland offered on May 18. All were previously among the furnishings of Taymouth Castle where, at the peak of their wealth, power and influence, the family lived from the early 18th century until 1922.

The Worcester porcelain service, each of more than 280 pieces painted with sprigs of heather and the family coronet, was part of a massive upgrading project that preceded the royal visit to Taymouth Castle on 7th-10th September 1842. John Campbell, 6th Earl of Breadalbane and Holland (1824-71) hired some of the finest craftsmen or the era to complete his renovation plans and commissioned the Worcester porcelain factory to add numerous pieces to the family dinner service.

During the royal visit, meals were provided for over 700 people each day. While royal invitees would have lunched and dined on silver, breakfast and refreshments would have been served from the Breadalbane porcelain service.

It was the Victoria and Albert’s first journey north of the border and one that would begin the queen’s love-affair with the Scottish Highlands and prompt the purchase of Balmoral in 1852. Victoria enjoyed Breadalbane’s tartan-clad ‘Scottish’ experience immensely, commenting in her journal: “It seemed as if a great chieftain in olden feudal times was receiving his sovereign”.

Also previously property of the Breadalbane family was a rare 16th century manuscript written in three languages – Latin, Gaelic and Middle Scots – it had been recorded at Taymouth since the mid-19th century. The 36 quarto page miscellany, known as The Chronicle of Fortigall, was written between 1554-79 by members of the MacGregor family in Perthshire. It contains passages of local and wider history, diary entries, stanzas of poetry, proverbs and aphorisms. The selling price was £25,000.

Leading the treasures from the Earls of Breadalbane & Holland at £62,500 was a textbook Dutch Golden Age genre scene by Jan Josefsz van Goyen (1596-1656).

An art appraiser, auctioneer, tulip broker, and real estate investor, van Goyen was above all a highly gifted and prolific landscape painter and etcher. Signed with a monogram and dated 1630, this oil of farm workers and cottages had been acquired for the family collection by John, 4th Earl & 1st Marquess of Breadalbane and was recorded in the 1853 Inventory of Taymouth Castle as hanging in the Drawing Room.

John William Godward’s sumptuous 1898 oil on canvas Poppies came for sale from the estate of Dr Helen EC Cargill Thompson (1933-2020). A truly public-spirited Glaswegian who gifted her collection of contemporary art to Strathclyde University and a contemporary silver collection to The Glasgow School of Art, the proceeds from at the sale will form an endowment fund at Strathclyde.

Dr Cargill-Thompson’s family had owned this important Victorian picture for many years. Signed and dated ’98 it was painted by Godward – the ‘High Victorian Dreamer’ at the peak of his powers. It depicts the model Miss Ethel Warwick (who was 16 when she posed for this picture) dressed in classical attire and framed by marble columns against a meticulously painted backdrop of lavender and red poppies. Attracting a range of international bidders at the guide of £100,000-150,000, it was sold at £447,000 (inc premium).

Lyon & Turnbull Vice Chairman, Nick Curnow commented: “We are absolutely delighted with the result for Godward’s ‘Poppies,’. It is an exquisite painting and has been much admired since it initially came in for sale. In very good condition, we are pleased it has found a new home with a UK-based private buyer.”

Timothy Spall Comes Out of the Storm at Pontone Gallery