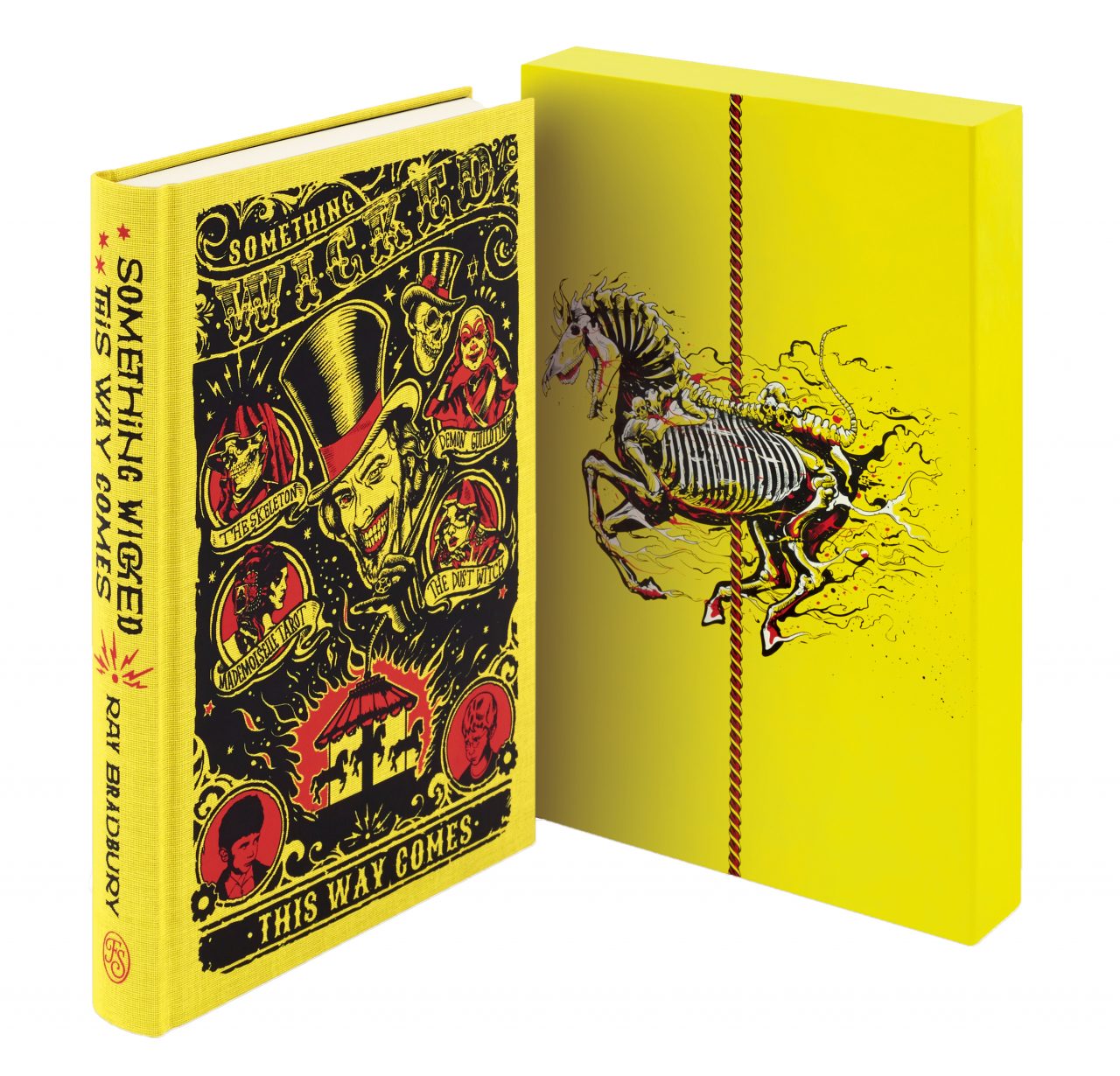 The Folio Society has announced the latest titles in its catalogue of science fiction classics with new illustrations; Neil Gaiman’s Anansi Boys illustrated by Francis Vallejo, Ray Bradbury’s Something Wicked This Way Comes illustrated by Tim McDonagh, and H. G. Wells’ The Time Machine and The Island of Doctor Moreau illustrated by Grahame Baker-Smith.

Founded in 1947, The Folio Society’s stated goal is to “create beautiful and authoritative editions of great literary works for readers”. Its catalogue includes non-fiction from Charles Darwin to Martin Gilbert and Mary Beard, while the fiction list includes the likes of Truman Capote, Frank Herbert and Kenneth Grahame.

The latest additions to the sci-fi catalogue include vintage, classic and modern titles.

See also: A Book Collector’s Guide to Fantasy, Science Fiction, and Beyond…

Gaiman chose Detroit artist Francis Vallejo to take on the challenge of illustrating his ‘sci-fi folk tale’. As well as vivid spider webs on the page tops and six superb full-colour illustrations, two of which are double-page spreads, this collector’s edition of Anansi Boys features a special tactile pictorial slipcase and a binding that nods to the dual nature shared by the characters Fat Charlie and Spider. Inside, fully illustrated, original black-and-white chapter headings tell their own folktale – all of which is especially fitting for a book about the power and vitality of stories.

Something Wicked this Way Comes

Comedian and actor Frank Skinner provides an introduction to a lavish production of Something Wicked This Way Comes by Ray Bradbury, illustrated by Tim McDonagh.

Described by Bradbury himself as the book he loved ‘best of all the things I have written’,  Something Wicked This Way Comes is a timeless classic of fantasy horror. For this, the first illustrated edition, Tim McDonagh has created seven spectacular colour illustrations dripping with carnivalesque menace. The eerie inhabitants of Cooger & Dark’s Pandemonium Shadow Show are lit with the gaudy yellow and red lights of the funfair, while Mr Dark leers from the midst of his attractions, the faces of his victims tattooed across his palms.

Originally released as part of an H.G. Wells set, The Folio Society’s edition of The Time Machine and The Island of Doctor Moreau by H.G. Wells gets a standalone release for the first time. Introduced by legendary fantasy writer Michael Moorcock and illustrated by Grahame Baker-Smith, The Time Machine is regarded as one of the great masterpieces in the literature of science fiction, while The Island of Doctor Moreau is a darker story foreseeing future technologies such as genetic engineering and organ transplants.

This beautiful edition, bound in buckram and blocked in gold, is a tribute to the lavish book-design tradition of the 1800s, in series with The Folio Society edition of The War of the Worlds. Artist Grahame Baker-Smith summons the spirit of the period with his atmospheric, fantastical illustrations, revealing the overgrown devastation of future Earth and the peculiar creatures of Doctor Moreau through the exquisite interplay of shadow and line.