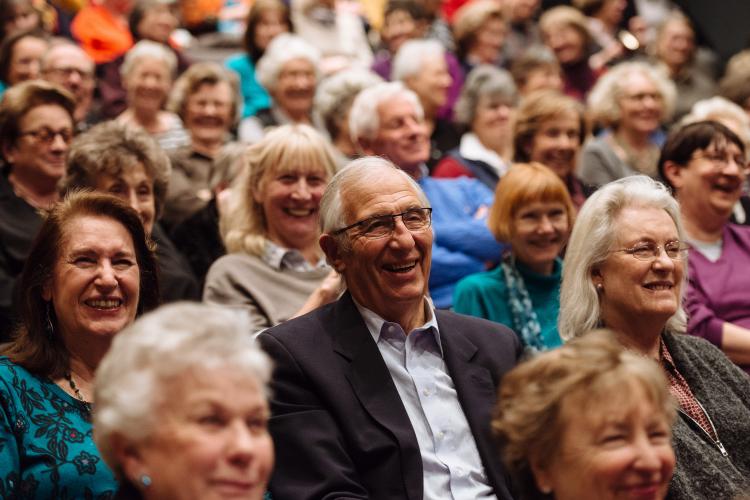 The Arts Society Connected is a new digital platform being launched on 7th April by The Arts Society, the UK’s leading arts education charity which has 90,000 members aged 60-100, with the majority aged 70 and over.

Free to both The Art Society’s 90,000 members as well as the general public, The Art Society Connects will host a series of fortnightly lectures by the UK’s leading art historians, as well as film screenings, and a community forum for anyone using the platform to connect. The charity is also offering free social media training to members to help them stay connected during this difficult time.

What makes The Arts Society’s offering different to the other digital events and platforms springing up at the moment is this is specifically targeted at those who will be hit worst by the current crisis – those aged 60 and above.

The aim of the platform is to help older members of the population stay connected, educated, entertained and informed over the next three months. The core aims of the charity are to create a better, healthier and more connected society through the power of the arts to nourish and empower. The platform will create a welcoming community for both existing Members as well as the general public, where as well as watching lectures and films they can chat in the forums.

The Arts Society has moved in response to the COVID-19 crisis to create this digital platform as a large proportion of its members are aged 70 and above and will be forced to isolate over the coming months. The Arts Society consists of 380 individual Membership groups, who organise regular lectures and educational trips to museums and galleries throughout the year. With the inability of members to meet in person, The Arts Society Connected will ensure that members are able to stay connected online even while they remain in isolation.

The Arts Society is working with its directory of Accredited Lecturers to create exclusive video lectures for the new platform. Lectures will be uploaded every other Tuesday at 11am. Members will be encouraged to take part in a community moment, when anyone planning on watching the talk can make a cup of tea at home and join the community forums online for a chat before and after the lecture. The lecturer will also be available to answer questions in the community forums following their lecture.

The platform will launch on 7th April with a lecture on Las Meninas by Velázquez by Arts Society Accredited Lecturer, art historian and linguist, Jacqueline Cockburn.

In addition to the regular lectures, The Arts Society Connected will host a monthly film screening in partnership with Exhibition on Screen. The first film screening will be the UK premier of Easter in Art, a 90minute film that will explore the different ways artists have depicted the Easter story through the ages, and how this informs our understanding of the history of East today. In addition as part of their digital outreach programme, The Arts Society is also rolling out a package of social media training for Members in order to get them connected in the digital world.

Florian Schweizer, Chief Executive of The Arts Society, says: “We are delighted to be able to connect with our members through our new digital initiatives. The Arts Society normally offers hundreds of live lectures every month and plays an important part in the lives of our 90,000 members – for the coming months we are not able to do this. Our new platform, online lectures and online meetings make a vital contribution to engage with people who have been instructed to stay at home for the coming months. We want to recreate and promote a sense of community, belonging and connection during a time of isolation and distancing. We believe the arts have the power to bring people together, and we will not let this virus stop communities from enjoying the arts with each other. We are working with our thousands of volunteers to develop new skills and initiatives, building resilience and a future in which many of our Members will embrace digital as a valuable addition to their cultural experience.

Mark Hill
Specialism: 20th Century decorative arts and collecting
Mark is the author of over 30 books on antiques, collecting and 20th century decorative arts, and is an experienced publisher, lecturer, and TV presenter. A regular on Antiques Roadshow for 12 years, Mark has also co-presented four primetime series on antiques and collecting for BBC2 including Cracking Antiques, Antiques Uncovered and Collectables with Bake Off’s Mel Giedroyc. Mark Hill has lectured across the world, including at the V&A in London, and contributed to many newspapers, magazines, radio and TV programmes.

Rebecca Hossack
Specialism: Aboriginal Art
Rebecca Hossack is the Director of three internationally-renowned galleries – two in central London and one in New York. She is credited with introducing Aboriginal art to Europe, and has curated important collections from Papua New Guinea, tribal India and the Bushmen of the Kalahari. Hossack writes regularly in the national press and lectures internationally on Aboriginal art, contributing to the Macmillan Dictionary of Art (1996) and the Oxford History of Western Art (2000). She has curated many exhibitions of Aboriginal and non-Western art both in the UK and worldwide, working closely with the British Museum, the V&A, the Bristol City Art Gallery, the Harrogate Art Gallery, the Horniman Museum, Leicester City Art Galleries, and the De Young Museum in San Francisco. Rebecca Hossack also campaigns to preserve rock art in Western Australia’s Burrup peninsular.

Marc Allum
Specialism: Antiques and Collectibles
Antiques expert, author, journalist, and TV Presenter Marc Allum has presented on Antiques Road Show for 23 years. He has a monthly antiques column in Period Living magazine and regularly contributes to publications including Period Homes & Interiors, Homes & Antiques and The Radio Times. Marc has lectured widely for many years to a number of different organisations in both the public and charity sector, including travel companies, The National Trust, The WI and many literary festivals including Cheltenham, Bath, Wells and Petworth.

Nicola Moorby
Specialism: British art of the nineteenth and early twentieth centuries
An independent art historian specialising in British art of the nineteenth and early twentieth centuries. She studied at the University of York and Birkbeck College, London. Formerly a curator at Tate Britain she has curated a number of exhibitions and has published widely on J.M.W. Turner, including contributions to the forthcoming online catalogue of the Turner Bequest. She is also co-editor and author of How to Paint Like Turner (Tate Publishing, 2010). In addition, she has published on Walter Richard Sickert and is co-author of Tate’s catalogue of works by the Camden Town Group.

Dr Jacqueline Cockburn
Specialism Spanish Art and Architecture
Dr Jacqueline Cockburn is an art historian and linguist. She is Managing Director of Art and Culture Andalucía running residential courses in Southern Spain in the art and culture of the region. She was Head of Art History at Westminster School, London and lectured undergraduates at Birkbeck College, University of London for over 20 years, as well as teaching MA and PhD courses.

The Arts Society is a leading arts education charity with a global network of over 380 local Societies, which bring people together through a shared curiosity for the arts. Its events provide welcoming places – locally, nationally and globally – to hear expert Lecturers share their specialist knowledge about the arts. Its 90,000+ members contribute to and preserve our artistic heritage through volunteering and grants.