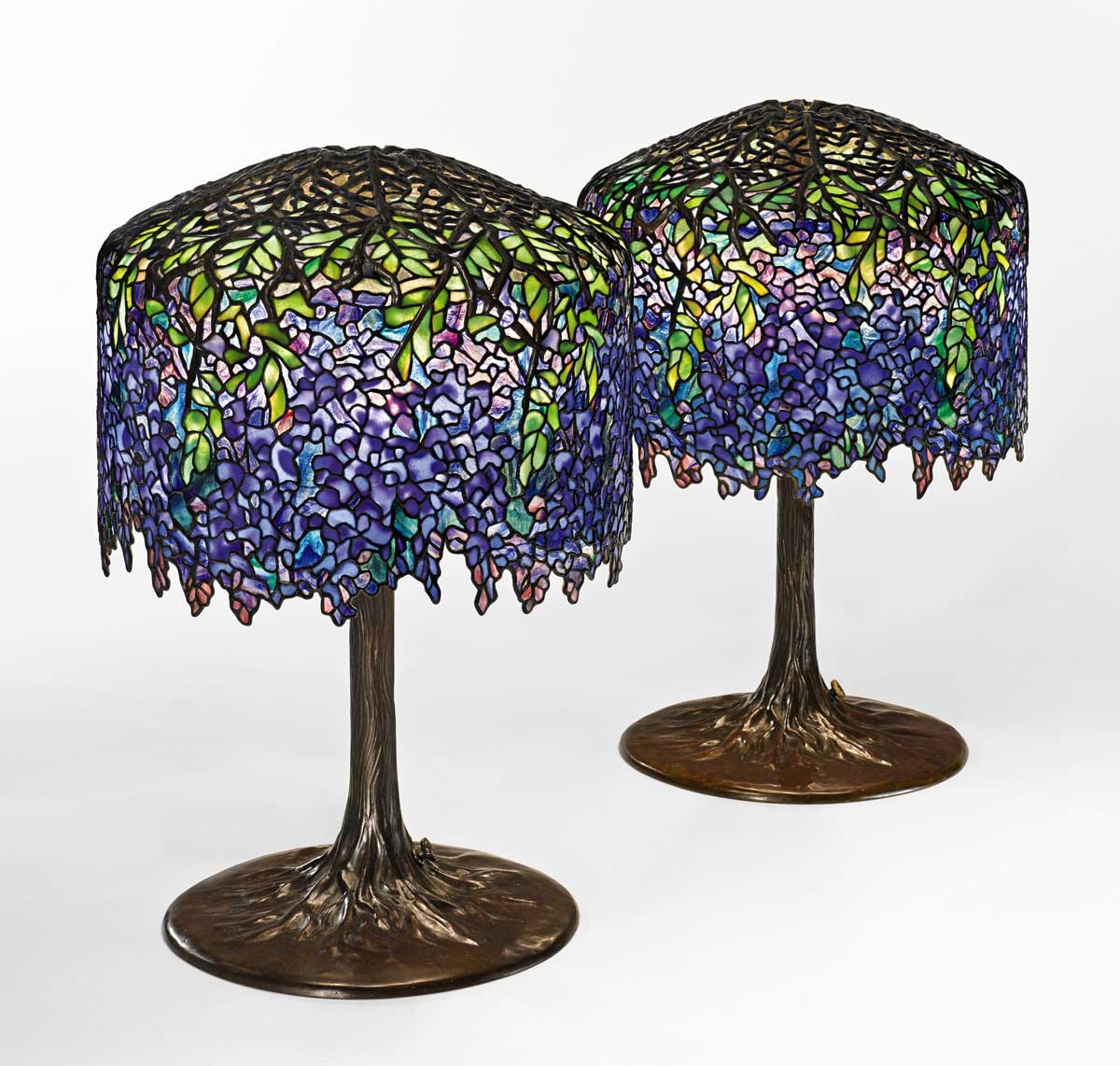 The world is well acquainted with the classic, timeless jewellery staples of Tiffany & Co., founded by Charles Lewis Tiffany—but what of Louis Comfort Tiffany, the diamond titan’s son and founder of Tiffany Studios? The exquisite, tinkling designs of the famously ethereal Tiffany lamps were the brainchild of this Tiffany family member, who would go on to carve his own artistic path away from his father’s identity and become one of the most renowned creatives of the Art Nouveau movement in America. Characterised by flowing long lines and representing all things nature, art within this period typically manifested in architecture, interiors, jewellery and   glass design.

Tiffany began his early career as a painter and travelled throughout Europe, picking up inspiration along the way. It wasn’t until the 1870s that the artist focused all his talents on decorative arts and home interiors with his company, Tiffany Studios. His first significant leaded stained glass piece was built for his own home in 1878: the leaded glass window of his entrance hall. Of all of his ventures, leaded glass would prove to be the artist’s most popular medium—these famous stained glass lamps found homes in the wealthiest residences of early 1900s New York City.

‘Colour is to the eye what music is to the ear. I have always striven to fix beauty in wood, stone, glass or pottery, in oil or watercolour by using whatever seemed fittest for the expression of beauty, that has been my creed’—Louis Comfort Tiffany

What made Tiffany Studios’ glass creations so revolutionary during this time was not simply its opulent, cascading designs, but the development of the glass itself. Up until this point in time, most stained glass windows were produced with white and coloured glass panes with specialist glass paint used to accentuate details within a scene before firing and leading.

Yet Tiffany, along with renowned stained glass window maker and early rival John La Farge, experimented with new types of glass to achieve a deeper variety of colours and hues to innovatively enrich their glasswork. Tiffany had patented an opalescent glass (a method coined ‘favrile’) that was milky in appearance and took on an almost rainbow hue when introduced to light. This new method allowed craftsmen to implement a range of brilliant colour gradients and hues into scenes without painting the glass.

In 1898, an already well-established Tiffany Studios—also renowned for creating blown glass vases as well as stained glass windows—moved on from decorative interiors to lighting and lamps, and so the lucrative Tiffany lamps were born.

Tiffany lamps range in price from as low as $1,000 up into the millions, but it’s at auction that these decorative pieces truly shine. Tiffany’s unique lamp designs have seen huge success throughout the world in recent years. The sensational Wisteria Table Lamps (c.1901-05)—each feature around 2,000 unique pieces of stained glass in green, blue and purple hues to represent a cascading wisteria plant sat atop a patinated bronze base—sold for $1,205,000 and $1,145,000 at a 2014 Sotheby’s auction in New York.

Like almost all coveted pieces of art throughout history, Tiffany lamps have been subject to major forgery scams. As technology advances, duplicates make differentiating between a fake and an original harder and harder.

There are some key factors collectors can keep in mind to help determine whether a Tiffany lamp is genuine or not. Firstly, take note of the lamp’s base. Tiffany created most of the lamps using a bronze base. The company did not use brass or zinc to model the bases, which are common materials used in copies. As bronze was an expensive material to procure during that period, the lamp bases were largely hollow, as well. In order to ensure the base was sturdy enough to support the glass shades, the craftsmen placed a heavy lead ring inside the base.

To check for this authenticating feature, simply lift the base cap to look inside. Be aware also of the quality of the glass used in the shades. As mentioned above, Tiffany lamps were made using specially developed, iridescent glass unique to Tiffany Studios. Most lamps were finished with an authentication stamp printed beneath the base, stating ‘Tiffany Studios New York’. If buying from an antique store, be sure to ask the merchant about the provenance of the piece, and whether they have the necessary paperwork to show who the lamp belonged to in the past for further authentication. Beyond taking these measures, would-be collectors should speak with an expert who specialises in forgeries for further advice before buying.

FINE ARTS PARIS is Holding its Second Fair in November