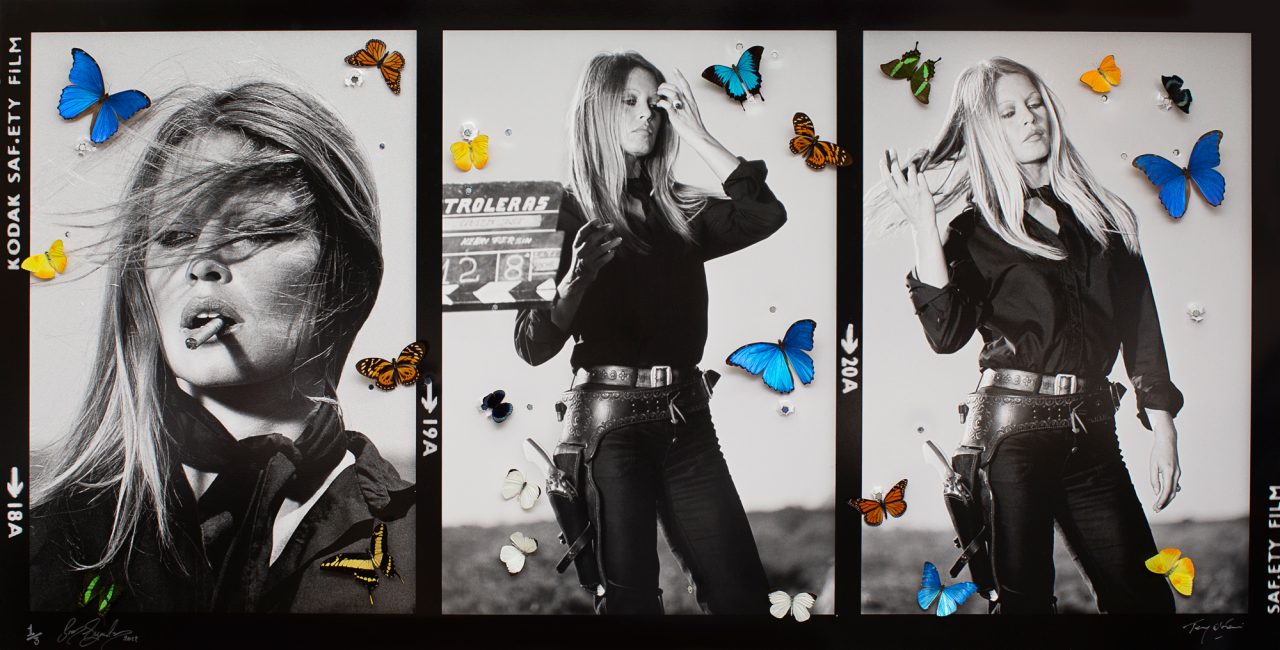 Hollywood Re-loaded is described as “a bold and brash reinvention of Terry O’Neill’s portraits of Hollywood icons posing with guns”. Portraits of stars like Michael Caine, Bridget Bardot and Roger Moore, each with a firearm in hand, are pockmarked by bullets fired by ex-Special Forces soldier turned artist and reportage photographer, Bran Symondson, using the same gun as in each portrait. Guns, and the violence they symbolize, become subjects, displacing Hollywood stars and the glorified ethos they mediate as well as create.

Inspired by the changing perception of guns and the reverberating conversation about gun violence around the world, Hollywood Re-loaded is a timely addition to both artists’ oeuvres. Classic works by Terry O’Neill get a second life as Bran Symondson inhabits the space where being a photographer and a soldier meet. Both, he rightly observes, “…are looking intensely for the moment”.

Bran’s act of embellishment unfolds in two symbolic steps – the first, a rupturing of outdated fantasies of modern gun-inspired chivalry, and the second, a healing and metamorphosis, personified by fantastical blooms of butterflies.

Terry O’Neill says about the forthcoming exhibition “What Bran has done with my photographs is astounding. He’s taken such time and consideration when creating his art – he really has transformed my photographs into something entirely his own. It’s been a thrill for me to work with a young artist such as Bran, to listen to his thoughts and process. And I can’t be more pleased with the results.”

Hollywood Re-loaded débuts at celebrity watering-hole Annabel’s on 30th September 2019. It then moves to the HOFA Gallery on Maddox Street on 1st October where it be on display throughout Frieze week until the 14th of October 2019.

Photographer to the Stars Terry O’Neill Dies at 81