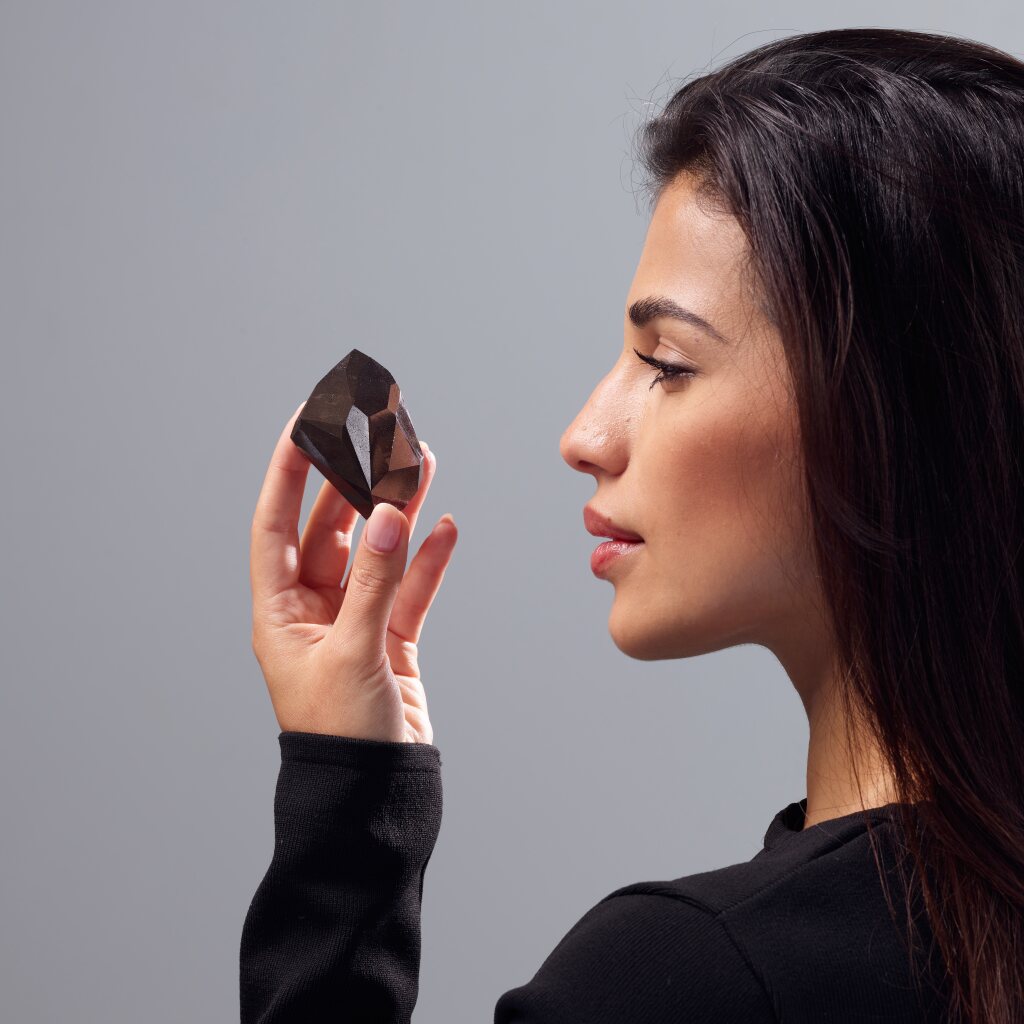 The world’s largest cut diamond, thought to have come from outer space, has been sold by Sotheby’s for £3.2m.

The billion-year-old, 555.55 carat black diamond entitled ‘the Enigma’, went under the hammer on the Sotheby’s online auction taking place from 3rd – 9th February. It didn’t achieve the stellar price expected, selling for £3.2m ($4.3m) on an estimate of $4m to $7m. Enigma, which possesses 55 facets, is designed in honour of the Middle Eastern Hamsa, a palm-shaped amulet which is a sign of protection and a tool of deflection against the evil eye but also represents blessings, power and strength.

Enigma gained the title as the largest fancy black natural colour diamond in the world in 2004 by the Gubelin Gem Laboratory and Gemological Institute of America, but then achieved even greater recognition after it entered the Guinness World Records back in 2006 for being classified as the largest cut diamond in the world, surpassing the weight of both the Great Star of Africa and the Golden Jubilee. Coming to the market for the first time in 20 years made one of the most groundbreaking events in diamond auction history.

The exact origin of Enigma is unknown, even to experts, though mаny believe it cаme from outer spаce. Sotheby’s have called the diamond ‘a treasure from interstellar space’ and an academic is convinced of the stone’s ‘non-Earth genesis’. It is thought that the diamond was created from meteoric impacts producing natural chemical vapor deposition or an extraterrestrial origin.

Professor of earth and environment at Florida International University, Stephen Haggerty, said: ‘There has not been a single, scientifically sound alternative to the ET origin of carbonado” and he is convinced of the stone’s “non-Earth genesis”.

The Enigma has a unique feature, in that most faceted diamonds have a single axis of crystal symmetry rendering them relatively easy to cut. However, the aggregated structure of carbonados is the toughest in existence, making them nearly impossible to cut and polish. For this reason they are relatively inexpensive and mainly used in industrial drilling. In fact the largest carbonado is the largest diamond ever discovered – the Sergio, a 3167 carat rough diamond that was eventually broken up and used in industrial drilling in 1895.

Sotheby’s jewellery expert, Nikita Binani, said: “This diamond has been treasured by its owners for more than two decades and the diamond itself has never been publicly displayed or offered for sale on the open market, so we are delighted for the opportunity to tell its story to the world.

“Selling it represents a once-in-a-lifetime opportunity to acquire one of the rarest billion-year-old cosmic wonders known to mankind,” she added.

Experts pointed to the result of the auction as confirmation that there is still a demand for tangible assets with ‘bragging rights’ in an era when intangibles such as NFT artworks seem to be setting the auction agenda.