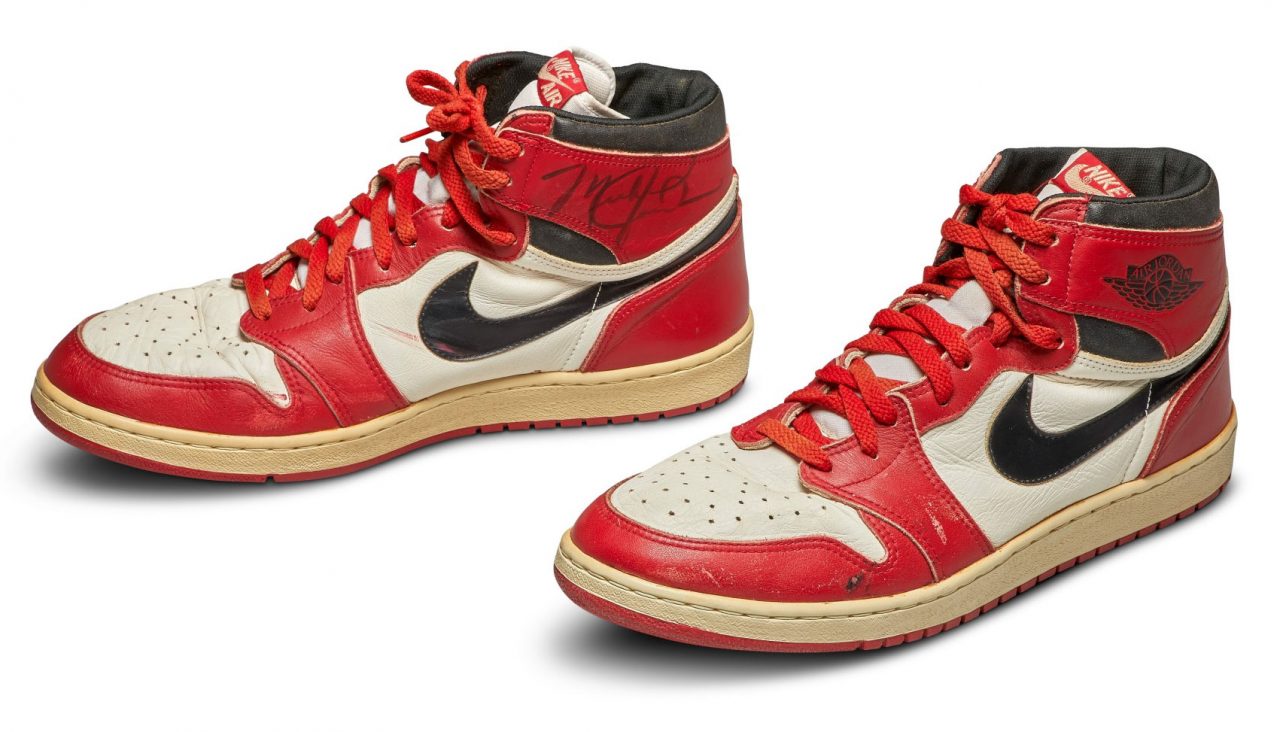 Nike Air Jordan 1 sneakers game-worn by basketball hero Michael Jordan in 1985 sold at auction at Sotheby’s for $560,000 – the new world auction record for any pair of sneakers, surpassing the previous record set at Sotheby’s for the Nike 1972 Nike Waffle Racing Flat ‘Moon Shoe’ sold for $437,500 in July 2019.

Following a bidding war which drove the value up by $300,000 within the final twenty minutes of the sale, the pair achieved more than 3.5x their $150,000 high estimate. Bidders ranging from age 19 to 50+ participated across four continents, with 70 percent of bidders new to Sotheby’s.

A Player Sample (PS), the shoes on offer were custom-made for Michael Jordan in sizes 13 and 13.5. Among the most valuable pairs of sneakers in history, these Air Jordan 1s are in remarkable condition, and were exclusively crafted for Michael Jordan – featuring supple leather and a unique cut specific to him.

The vintage originals are in the Chicago Bulls white, black and red – the Air Jordan 1 colourway that Michael Jordan wore the most often on the court. In 1984, Nike gave Jordan a signature line of shoes and clothes – a crucial, unprecedented move to entice Michael Jordan to sign with Nike. Produced between February and April 1985, Jordan wore the present pair of Air Jordan 1s during an early, pivotal point of his career and thus promoted the sneaker’s popularity.

In fact Michael Jordan was almost single-handedly responsible for creating the market in trainers when his black-and-red shoes (Air Ships) became controversial after the NBA sent a letter to Nike in February of 1985 informing the company that Jordan’s colourful shoes were a violation of the league’s uniformity of uniform clause, therefore forbidding Jordan from wearing them. Nike responded by creating an ad campaign around Jordan’s banned shoes, remarking that while “the NBA threw them out of the game, fortunately, the NBA can’t stop you from wearing them.” The Air Jordan 1s were created in the wake of the famous banned Nike ad campaign, and established Michael Jordan as the league’s leader in shoe style.

Opportunities and Challenges for the Private Aviation Industry