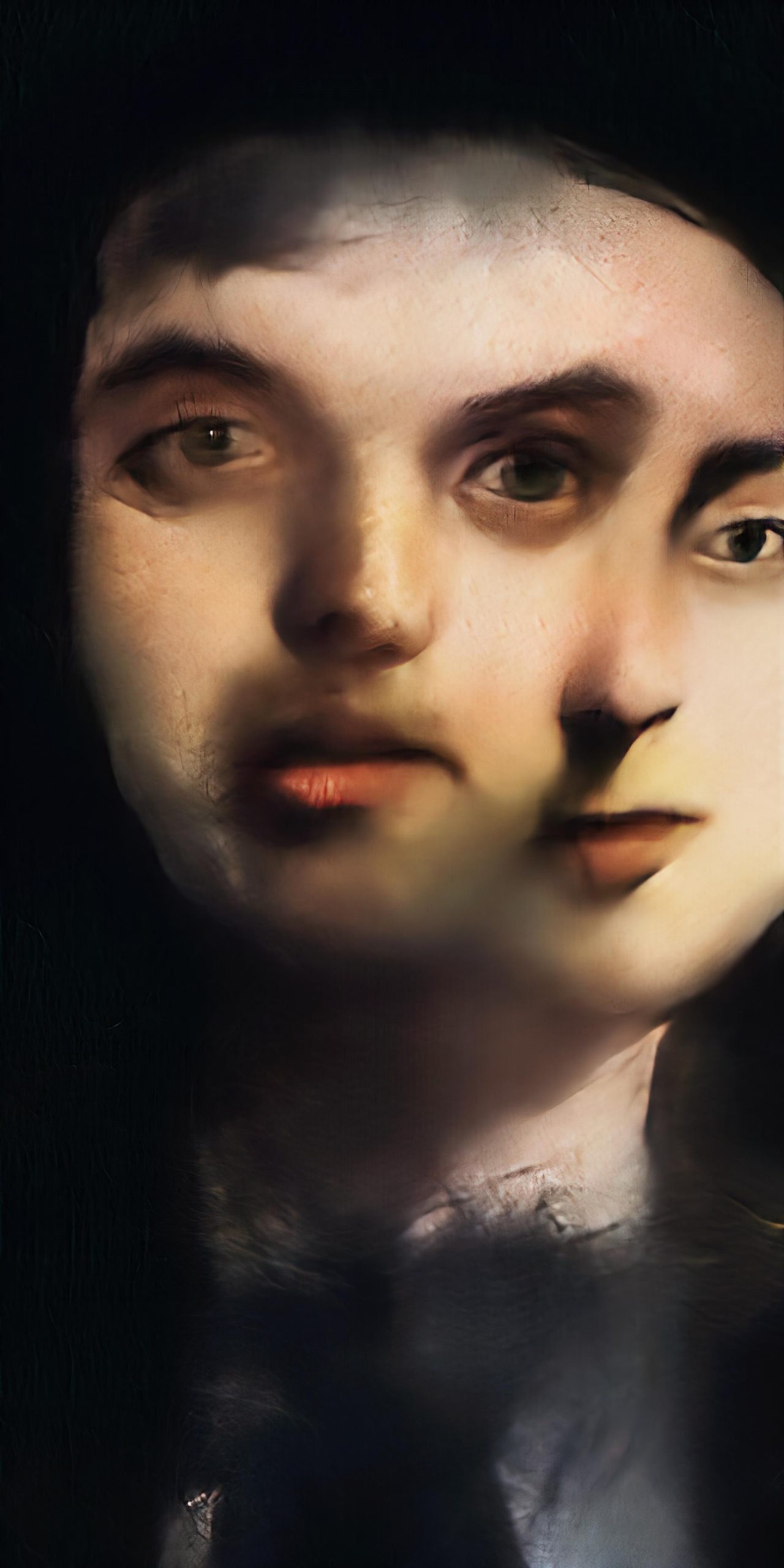 Titled Memories of Passersby I, Mario Klingemann’s groundbreaking installation comprises a wooden console table which hosts an AI computer ‘brain’, and two framed screens upon which the machine’s output – disquieting portraits of imagined masculine and feminine faces – blur hypnotically into focus. Differing from the finalised human-curated products of AI which have previously been exhibited or sold at auction, this is the first complete AI model, and only the second ‘AI artwork’, ever to appear on the market.

A remarkable technological feat, the interminable flow of images presented does not follow a predefined choreography, but is instead the result of the AI interpreting its own unique output in real-time; the machine contains all the algorithms that enable it to generate a new and never-repeating combination of portraits for as long as it is running.

The autonomous AI computer ‘brain’ consists of a system of neural networks very similar to those of the human brain. The neural network is composed of a large number of highly interconnected processing elements (neurones) which cannot be programmed to perform a specific task, but instead learn by example.

Klingemann has been exploring the potential of what he calls “neurography” for many years. Many of his recent creations have been made with a technique called generative adversarial networks (GANs) which place two algorithms in competition with one another.

On one side of the algorithm is the Generator, which makes a new image based on photographs of portraits from the seventeenth to nineteenth centuries. On the other side is The Discriminator, which tries to spot the difference between the human-made image and images created by the Generator. The aim is to fool the Discriminator into thinking that the new images are real.

There are three editions of the work and two artist’s proofs, but as each edition is constantly working to envisage unique portraits, no two will ever be the same.

Having previously drawn comparisons to the work of Francis Bacon, the conjured faces have been influenced by portraits from the seventeenth to nineteenth centuries, as well as by Klingemann’s own penchant for surrealist works by figures including Max Ernst. Describing the work, the artist explains:

“Memories of Passersby I houses a very powerful machine which creates paintings while you look at them, which I think is quite magical. Neural networks are involved, and you could say that they are the brushes that I’ve learned to use. The machine is in a cycle where it continuously creates new faces that start changing and fading away – it observes itself and creates a feedback loop. Of course, it’s hard for me let it out into the world without me by its side, but I trust that it’s ready to keep creating new portraits forever, as I always hoped it would do. I hope that when people sit and watch these fleeting faces pass by, they will get the same feeling I do”.

“In seeking to subvert more traditional processes of creation, Klingemann’s work presents a truly amazing opportunity to watch an AI brain think in real time, as the machine creates brand new portraits pixel by pixel. To offer a cutting edge piece of technology such as this, which has the power to generate haunting portraits reminiscent of past Masters, is truly unprecedented. It is the nature of Contemporary Art to push boundaries – boundaries which have been, and will continue to be, redefined for centuries. AI art is the latest innovation winning its place in art history books, and Klingemann’s work stands on the precipice of an exciting new era in our field.”

Sotheby’s sold for $3.7b in Deal With Media Entrepreneur