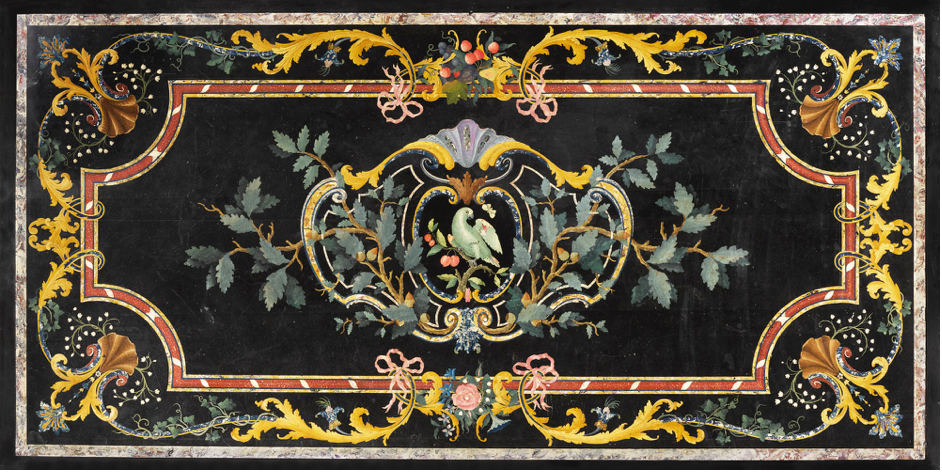 Sotheby’s New York’s “Selling Exhibition” celebrates the art of collecting with an assemblage of artworks and sculptures inspired by the tastes of two most influential lines of collectors, the Chatsworth and Cavendish families. Inspired by Chatsworth: A Selling Exhibition revisits the country house aesthetic, via its splendid collection of 18thcentury silver, commissioned portraits of nobility, captivating biblical paintings, diamond jewellery and domestic items.

Giovanni Battista di Jacopo Rosso, otherwise referred to as Rosso Fiorentino is known for his distinctive composition in The Virgin and Child with Saint Julian and a Donor, that was completed in 1540. Seated before a forest green symbolising resurrection, the Virgin Mary holds the young Christ on her lap, as he extends his arm to bless the figure of Saint Julian in front. Saint Julian the Hospitaller is a Roman Catholic Saint and was originally born into the family of a nobleman; however, Julian had been “cursed” to one day kill his parents. He avoided contact with his family by leaving home at the age of ten, yet twenty years later his parents managed to find the now married Julian. In a fit of anger at supposed rumours of his wife committing adultery, Julian mistakenly slew the sleeping man and woman at his house, who were in fact his parents.

The fallen sword depicted in the painting, coupled with the restorative green cloth foreshadows his quest to redemption and transition into Saint Julian the Hospitaller. The theme of forgiveness is reflected in the donor’s appeal for clemency, who appears in the background of Rosso’s painting. Nonetheless, it is Julian who Rosso allows to take centre stage of the painting, with the antithesis between his red robes against the donor’s dull brown shifting the viewer’s attention to him. The contrast is deliberate – a fact which is emphasised in the substitution of traditional, neutral clothing for religious figures for a flowing red.

Characteristically rosso, the hatching technique employed grants the painting volume and uplifts the surface, while the preserving of these elements in the 16thcentury painting is transparent in the finer details, such as the folds of the robes.

Antonia Tempesta’s The Egyptians Drowning in the Red Sea in the Inspired by Chatsworth exhibition evocatively captures the Abrahamic prophet Moses parting the Red Sea – a divine moment recounted across all three Abrahamic religions.

Tempesta was a painter and draughtsman, renowned for his glorious depictions of battle scenes. In addition to executing impressive decorative art works, he presented smaller cabinet pictures for the connoisseur market. His marble illustration of the carnage that ensued following the Red Sea’s parting is exemplary of his battle depictions, though rare in terms of the subject portrayed.

The painting, on marble identified as either Breccia Medicea or Breccia Moresca, places the Egyptians in the centre, as the Israelites remain to the left of the painting and on the fringes of the viewer’s peripheral vision. Tempesta teases his viewers with hard to identify details, such as the placement of Moses and the elusive cloud, which can only be symbolic of the dividing Red Sea’s arbiter, God. The turmoil enforced by the Red Sea’s division is emphasised in the background via the sorrowful imagery of the drowning horses; similarly, in the foreground Tempesta uses subtle, yet evocative imagery to depict the Israelites’ victory. In the foreground’s left corner, an Israelite woman clutches her baby on the safety the cliffs afford, juxtaposing against the submerged, Egyptian man’s desperation. Another  minute detail, yet in classic Tempesta style, enclosed with powerful symbolism is the positioning of God – to the left, the side of the Israelites.

Featured in Inspired by Chatsworth: A Selling Exhibition is an “Italian scagliola top”, hailing from the second half of the 18th century. Sotheby’s believes the artefact to be from Tuscany, albeit the technique of “scagliolia” itself predates the 18th century. Birthed during the Roman era, “scagliola” is formed from a combination of plaster and crushed selenite with pigments, which emulate the appearance of marble after being dried and topped off with polish.

The cartouche in the centre envelops a parrot amidst cherries and branches of oak, that grows outwards towards the floral borders and graceful ribbon ties enshrining the edge of the Italian top.