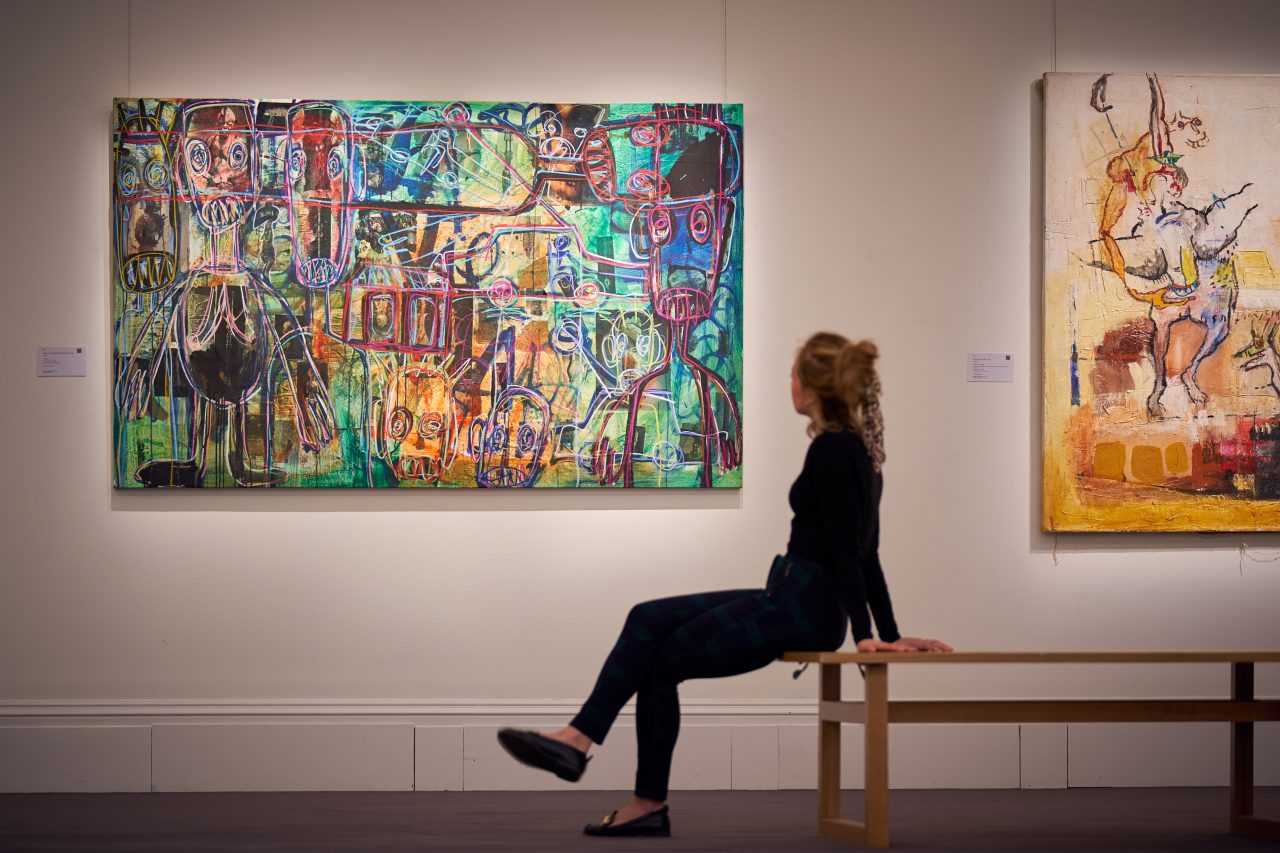 Coinciding with the sale was El Anatsui’s largest survey exhibition, curated by Okwui Enwezor and Chika Okeke-Agulu in Munich, complementing his upcoming representation of Ghana at the Venice Biennale.

New heights were attained for Hassan El Glaoui with his piece, La Sortie du Roi, achieving a new auction record for the renowned Moroccan artist with its sale for £137, 500/ $179, 438.

The painting was influenced by El Glaoui’s childhood spent at his father’s art studio, where his father would often emphasise depicting key Moroccan traditions through paintings. La Sortie du Roi explores the national celebration of a King’s ascent to the throne and is an event still celebrated today as Fête du Trône or Throne Day. In Morocco, Throne Day was historically celebrated around the forts with nearby locals dressed in traditional white djellabas; these details are recorded in the painting.

Born in 1991 at the Democratic Republic of Congo, Ilunga studied painting at the Académie des Beaux-Arts in Kinshasa. The formal figuration taught at the institution Under the rigid, allowed the artist to hone his painting skills and develop a sophisticated technique; however he found the program allowed little room for creativity and departed from the Académie in 2011. Following his departure, Ilunga coalesced with other artists to from M’Pongo, a group studio where artists could come together and share different ideas. The group was inspired by the creativity demonstrated by the modern day, Kinshasa, which became a crucial focal point of Ilunga’s artistic itinerary as his painting delve into Democratic Republic of Congo’s post-colonial identity.

In addition to Illunga, another Congolese talent was exhibited in Chéri Samba’s glittering, J’aime la couleur from 2005 which amassed an unexpectedly high £93,750/ $122,344

In a statement to The Skateroom, Cheri Samba discussed the impetus behind J’aime la couleur, “Colour is everywhere. I find that colour is life. It is necessary that our head rotates as a spiral to recognize that all that surrounds us is none other than colours. “J’aime la couleur” so as not to say “J’aime la peinture”. Colour is the universe, the universe is life, painting is life.”

J’aime la coleur is an expression of how Samba perceives the world to be, which he encapsulates through his use of bright colours and glitter, a key element of his paintings from the 1980s and onwards. Samba’s intention behind this is to ensure his paintings can be viewed from long distances and thereby leave a lasting impression on its viewers.

Summarising the success of the auction, Hannah O’ Leary, Sotheby’s Head of Modern and Contemporary African Art, stated: “Exceeding all pre-sale expectations, today’s auction reflects the continued strength of, and appreciation for, the Modern and Contemporary African Art market. Standing at the forefront of the field, Sotheby’s sale saw a multitude of new records for artists from across the African diaspora, including the father of Congolese ‘Popular’ painting Chéri Samba, Moroccan master Hassan El Glaoui, and rising star Eddy Kamuanga Ilunga. We also saw a fantastic result for Ghanaian artist El Anatsui, who will be representing the country for the first time at the Venice Biennale later this year. Today’s auction signals a continued international interest in the category, spanning the African continent and extending across the globe.”

Visit www.sothebys.com/en/calendar to find out about upcoming auctions!