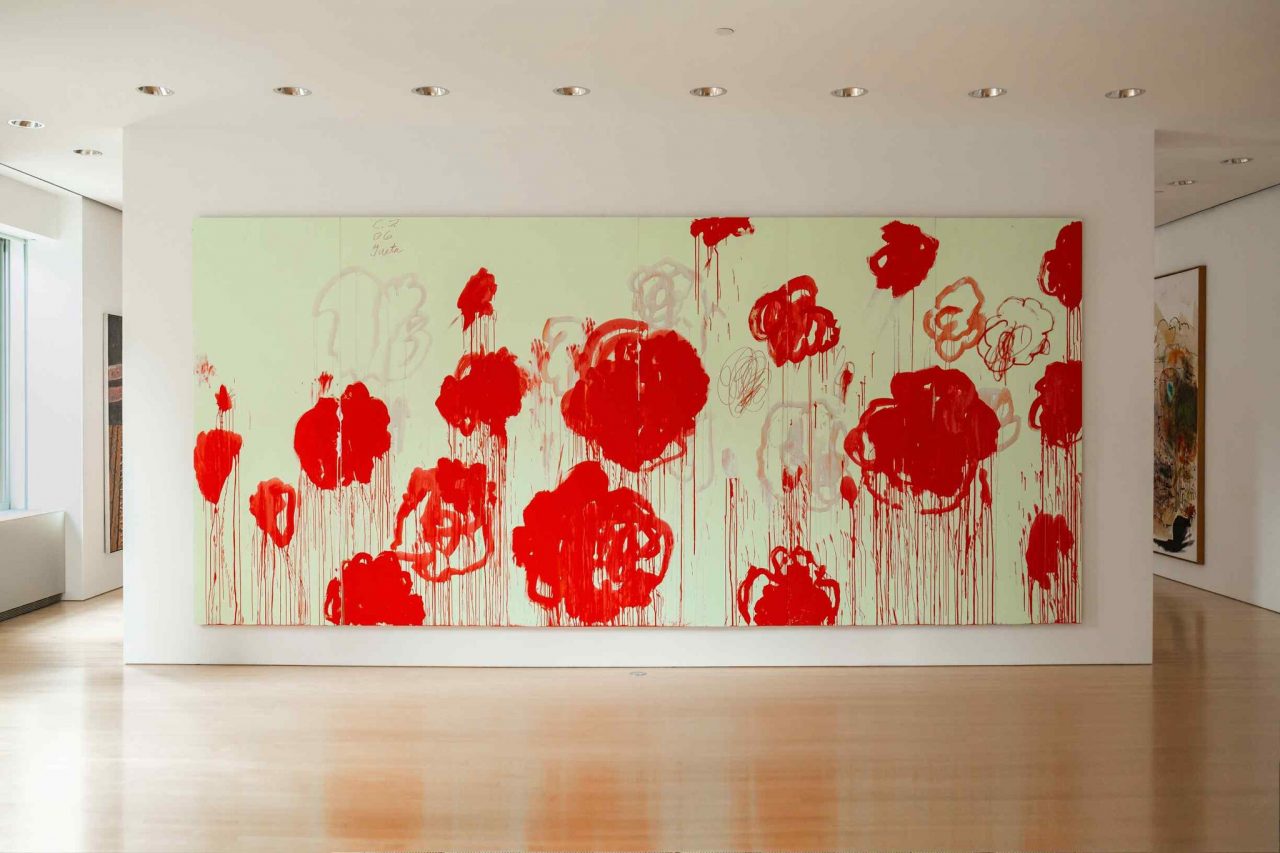 This morning, Thursday 9th September, at a global livestream event, Sotheby’s revealed details of the forthcoming landmark sales of The Macklowe Collection – one of the most important art collections, of any kind, ever to come to the market.

Each of the 65 works is a consummate masterpiece in its own right; together they constitute an unrivalled ensemble that charts the high points of Western artistic achievement of the last 80 years. Acquired over the course of half a century, the collection is the fruit of decades of searching, honing, and refining, driven by immense patience and an innate understanding of quality.

Estimated to realise in excess of $600 million – the highest estimate ever placed on any collection to come to auction – The Macklowe Collection will be offered across two dedicated evening single-owner sales at Sotheby’s in New York, on November 15th this year, and in May 2022.

The collection is being sold as part of the divorce of property tycoon Harry Macklowe and his wife Linda. The sale was originally scheduled for 2020 but was postponed due to the pandemic.

The first of the two sales will feature 34 works which together encompass an extraordinary breadth of 20th- and 21st-century art, ranging in date from the 1940s to works painted less than a decade ago, and including masterworks by Alberto Giacometti, Mark Rothko, Cy Twombly, and Andy Warhol. The sale will also shine a light on a distinguishing feature of the collection as a whole: its enormous depth. Many artists – among them Jeff Koons, Brice Marden, Agnes Martin, Sigmar Polke, Gerhard Richter, Cy Twombly and Andy Warhol – are represented by multiple works, each one marking a distinct and critical moment in their respective careers, and together forming an insightful portrait of the artists’ evolution over time.

Like his great friend Jean-Paul Sartre, Giacometti was fascinated – tormented even – by the human condition, the exploration of which is at the heart of his oeuvre. In Le Nez – one of the artist’s most important and powerful sculptures – the striking form of the figure suspended within a cage evokes the fragility, aggression and tension that lie at the heart of the existential experience so central to Giacometti’s art. A powerful, audacious work that brings together references to Surrealism and African sculpture, Le Nez summarizes the existential angst of the moment in which it was created, and of the human condition more generally. No other example of this extraordinary work has ever appeared at auction, the majority of casts having been acquired almost immediately by major museums around the world. The significance of this sculpture within the artist’s oeuvre was underlined when another cast of Le Nez was selected for the cover of the catalogue of the 2018 Giacometti retrospective held at the Solomon R. Guggenheim Museum, New York.

Executed in 1951, No. 7 dates from the key moment in the early 1950s during which Rothko developed his signature style of abstraction and mature mode of artistic expression. Other significant works from this critical year are in the collections of such esteemed institutions as the Tate Gallery, London; National Gallery of Art, Washington D.C.; and the Tel Aviv Museum of Art. The towering scale of the painting encourages deep contemplation and a profound optical experience. First exhibited at The Betty Parsons Gallery in New York in the year it was painted, No. 7 has since been included in several major exhibitions of Rothko’s oeuvre, including the traveling retrospective exhibition organized by the National Gallery of Art in 1998. It was previously owned by American collector Sarah Campbell Blaffer, who assembled one of the most important collections of modern art in the United States during the 20th century.

Rendered in succession with startling clarity and crispness against a luminous metallic background — conjuring the silver screen of the cinema — Warhol captures Monroe’s visage with a haunting power. From the time of Monroe’s death in August 1962 to the end of that year, Warhol created 20 silkscreen paintings based on a famous 1953 publicity photograph of Monroe from the film Niagara. Of those 20, there are only six serial Marilyn paintings in which her face is repeated in nine or more screens. This work is one of just two from this select group still in private hands.

One of a group of six monumental paintings known as A Scattering of Blossoms, Twombly’s Untitled from 2007 is a vast expression of the unbridled energy and inspiration that characterize the artist’s late career. All the works from this important series are now in the world’s most esteemed private and institutional collections, and this marks the first time that one will appear on the secondary market.

Inspired by the haiku of the famous 17th-century Japanese poets Bashō and Kikaku, the Blossom paintings bring together allusions to Japanese culture and aesthetic contemplation with influences from the French Enlightenment and Greek mythological tradition. In Untitled, the painterly exuberance of the bright red blossoms and vigorous expressionistic brushwork set against the pale green ground recalls the rich surfaces of the artist’s earlier canvases of the 1960s, now articulated on an epic scale. Acquired in the same year it was painted, this masterpiece summarises the artist’s greatest triumphs as he neared the end of his life.

Emanating celestial light on a spectacular scale, this piece is illustrative of the aesthetic and conceptual mastery that have come to define Richter’s revolutionary body of work. One of only four Richter seascapes of this scale, all executed in 1975 and housed in prominent collections around the world, Seestück captures aspects of Richter’s photo based paintings and anticipates his abstract tendencies, at the same time bringing into focus the late 20th-century debate around the role and legitimacy of painting.

These two masterpieces, both major milestones in the development of de Kooning’s artistic practice, together illustrate the remarkable evolution of his art: each succinctly embodies the preoccupations and stylistic themes that defined the artist’s output in two critical decades. Rendered in sumptuous passages of creamy whites, cool whites, and fiery reds, Untitled XXXIII belongs to a period of explosive creativity in the late seventies that produced an illustrious body of large-scale, color-drenched canvases. In Untitled IV, painted just a few years later in 1983 and acquired that same year, the luxuriant and tactile impasto of Untitled XXXIII resolves into ribbons of electric blue and red hues that possess a bold yet refined lyrical quality. With its enlivened spirit and fluidity of line, Untitled IV is significant among the artist’s early 1980s canvases for its vibrancy and dynamism. Each testifying to the unbridled glory of colour and majesty of paint that has defined his career, these two works together capture the perpetual innovation of de Kooning’s inquiries into abstraction.

In addition to being one of France’s greatest poets, Apollinaire was also a highly influential commentator and advocate of Modernism, and of Picasso’s work in particular. Following the poet’s premature death at the age of 38 in 1918, Picasso was commissioned to design a monument to his friend. This maquette – with its references to the Cubist forms that Apollinaire championed (he was the first to coin the term ‘Cubism’) and to the poet’s writings (in Le poète assasiné, Apollinaire describes the monument for the dead poet Croniamantal as ‘a statue of nothing, of a void, that is magnificent’) – is a powerful tribute to their friendship. Picasso’s desire to see the maquette for his monument to the poet realised on a grand scale was never fulfilled; but 30 years later, he had this version made and kept it in his collection thereafter.

An early triumph of Sigmar Polke’s iconic Rasterbilder (dot paintings) from the 1960s, Rasterbild mit Palmen marks the beginning of half a century of radical experimentation pursued by the artist over the course of his career. Painted the same year as Polke’s first solo show in Berlin, this important early work brings the viewer’s attention to the very mechanics of image production. An archetype for otherworldly exoticism, the palm trees are reduced to silhouettes through dots, shadows and varying shades of color. By breaking down the cohesiveness of the picture, Polke subverts the authority of the image, questioning the ‘objective truth’ of its subject, and unraveling the romantic promise offered by commercial images in postwar Germany.

Of the five works by Polke in the collection, four were formerly in The Saatchi Collection – once home to some of the most significant of the artist’s works, including his iconic Bunnies (1966) now in the collection of the Hirshhorn Museum in Washington, D.C. Together, the five works elucidate why this iconoclastic artist, who worked in so many different styles, is one of the most important of the postwar period.

Highlights from The Macklowe Collection are now on view to the public in Sotheby’s New York galleries until September 12th, after which highlights from the November sale will be exhibited around the world as outlined below. Overview details on the collection are currently to be found on www.sothebys.com, where the full catalogue —complete with illuminating essays, videos and interactive features — will be available later this fall. Once the collection returns to Sotheby’s New York galleries ahead of the sale in November, there will also be a full virtual and physical program of talks, tours and other events — details of which will follow.