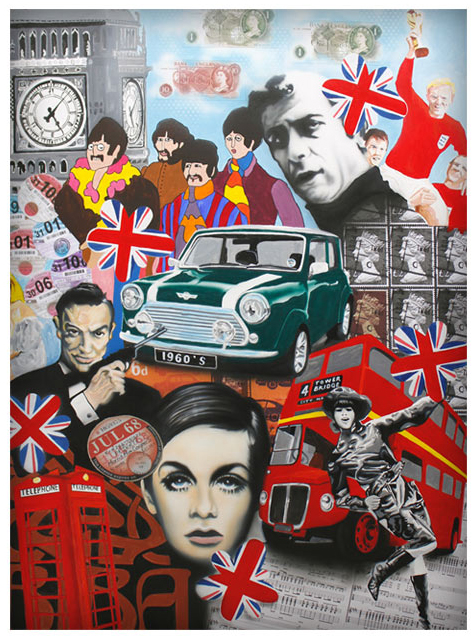 The Mini, one of the most popular British cars ever built with 1.5m sold, celebrates its 60th anniversary in 2019. To mark the occasion, Birmingham-born artist Gary O’Neil has produced a series of prints in the pop-art style appropriate to the Mini’s 1960s origins.

The original Mini ranked fourth in a poll of British design icons organised by the BBC and the Design Museum; it has had starring roles in films like The Italian Job, and at the London 2012 Olympic Games. It has been restyled as a racing car, a police car and a military transport; and has won the hearts of many millions across the globe for six decades. Now, the Birmingham-built classic is the inspiration for a new series of arresting pop art-style art works launched by art agency Thomas Crown Art (TCA).

International art dealer at TCA, Stephen Howes, comments: “The Mini, the greatest success story that the British motor industry has ever known, was never meant to be an icon. It was meant to be practical and efficient, but with its unconventional looks, its daring-to-be-different charm, its personality, and its design, the Mini was cool from the very beginning.

“From the moment it was launched in 1959, there was a coolness about it that has endured and undoubtedly grown over the last six decades. Its place as a true, mould-breaking British icon was cemented in the epicentre of the Swinging Sixties and has been galvanised in the 21st century’s Cool Britannia movement.

“How could we not celebrate this timeless, fun-loving legend as it prepares to celebrate its diamond anniversary? And who better than Birmingham-born artist Gary O’Neil?

“These bright, arresting, highly original and collectable mixed-media pieces encapsulate the spirit of the Mini. They have an electrifying sense of freshness about them and have their origins in the 1960s pop art scene.”

For his part, artist Gary O’Neil explains: “Like a lot of people, I’m quite nostalgic about the Mini. My parents owned several, and I had one for my first car. More recently, I bought myself a “Cooper S” which I love to drive. We thought it would be great to recognise the Mini’s 60th birthday by producing some artwork. I decided to enhance the paintings using old tax discs, and to emulate the dominant style of art from the period. I think the result of painting the iconic Mini in the pop art style works really well.”

Sixty Years and Sixties Glory are available as giclée prints in a limited edition of 110, signed and numbered by the artist and taken from original mixed-media-on-canvas pieces measuring 810mm by 610mm. Cost is £99 (plus £49 for framing).

Find out more on the Thomas Crown Art website.