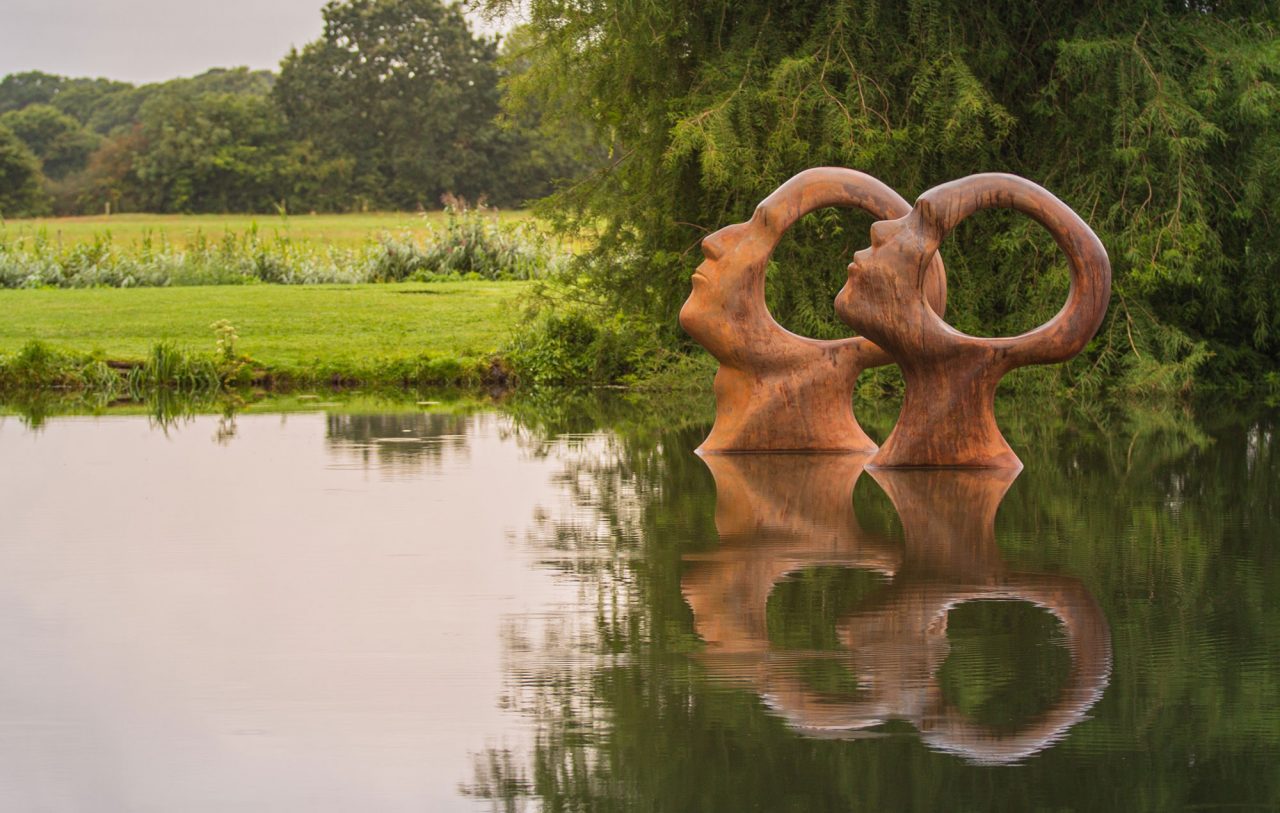 British sculptor Simon Gudgeon, born in 1958, specialises in large pieces for public display – his signature smooth, semi-abstract style is seen in Hyde Park, and in the collections of Prince Charles’ Highgrove House in Gloucestershire and at the United States’ National Museum of Wildlife Art. But his career could have been quite different, as Arts & Collections discovered when we caught up with Simon in his Dorset home, set in the 26-acre sculpture park he has developed over the last decade.

Celebrated sculptor Simon Gudgeon has lived a life of two halves. Trained in law, up until his thirties he tried career after career, never settling down to one subject. But at the age of 40 he was introduced to sculpting and has never looked back.  He has gone on to win international acclaim and to carve out his place as one of the UK’s leading contemporary sculptors. Arts & Collections talked to Simon Gudgeon about his journey, his passion for ‘making’ and the artistic principles which guide him.

See also: Canova and Thorvaldsen: The Birth of Modern Sculpture

Simon Gudgeon bases himself in a beautiful Dorset home, set within a 26-acre sculpture park which he has developed over the past decade with his wife Monique. Sculpture by the Lakes is filled with the work of his own hands – from the iron gates and fences, to the seats, to the sculptures themselves. Most of his large-scale outdoor sculptures are installed here, both to be enjoyed by visitors, and viewed by potential buyers.

With their fluid, smooth style, and elegant natural forms, Simon’s creations reflect his core belief that sculpture must not only ‘encapsulate beauty’ and ‘uplift the spirit and enhance its surroundings,’ but also have a ‘subconscious appeal to the viewer’s emotions.’ He explains: “What is important is that the viewer connects with the art.”

In keeping with this, his works have been successful both in their execution and their reception; that his sculptures connect with people is evident in how widely and well received they have been.

Simon’s pieces feature in important private collections including those of Prince Philip, Prince Charles and Prince William, and no fewer than three are installed at One Hyde Park, London’s most exclusive address. They are also to be found at high-profile public locations around the world: his 3m-tall bronze bird Isis was the first sculpture to be installed in London’s Hyde Park in 50 years; the same piece is at America’s National Museum of Wildlife Art in Wyoming; and two Gudgeon sculptures are outside the Cirque du Soleil International Headquarters in Montreal, Canada.

His artistic journey has not been straightforward. As a lad growing up in rural Yorkshire he had no great love of art. Instead he went to university to study law – or actually “to meet girls” as he wryly admits. He pursued his studies successfully, if without enthusiasm, becoming a solicitor at a London firm before eventually jumping ship. Marketing, photography and selling fine art prints were next on his assorted list of professions.

In the 1980s Simon developed a successful landscape gardening business, only for it to collapse in 1991 after rising mortgage rates brought the trend in home renovations to an abrupt end. He walked away “with nothing” he told us: “I lost the house, the car – everything. I was in my 30s but I thought ‘that’s it – I’m never going to make anything of my life.’”

It was the gift of a box of paints from his mother at this point that changed the course of Simon’s life. “That was the first time I knew what I wanted to do” he explains. Ever resourceful, he turned to professional house-sitting which kept a series of roofs over his head and allowed him to paint “all day every day” for four solid years.

He began to exhibit, working with galleries, and carved out a decent living, but for several years never attempted sculpture. It was during a “painting block” while tidying up his studio that he came across a piece of artist’s clay he’d bought on a whim a few months earlier. “I decided to have a little play around with it and started sculpting – and found I absolutely loved it,” he says, adding: “after a year I realised I hadn’t painted at all. It was the sculpture which really fired me up.”

Fired up he was. Within a few years Simon was exhibiting across the UK, America and Europe, winning a legion of collectors. Initially specialising in representative wildlife art, his style has become more abstract over time, notable for its fluid lines and deceptively simple forms imbued with spirit and emotion. He loves abstracting birds in particular, and latterly has focussed on human forms too. He has also produced a series of kinetic sculptures.

He works predominantly in bronze, but also marble, glass and steel, and more recently began using his skills as a welder to create one-off pieces. His latest, Liberté, a human figure inspired by his own sense of freedom during the coronavirus lockdown, is fabricated from steel carpet nails.

“I realise now that the most important part for me is the making – that’s when I’m at my happiest,” says Simon. “I’m described as a sculptor, but essentially, I’m a maker. My biggest passion over these last few years has been creating Sculpture by the Lakes as a work of art in its own right – it has made me much more diverse. Walking around I get ideas, and I want to try different things. It also allows people to come here and really connect with those pieces.”

“My life is essentially like the film Sliding Doors,’ he laughs. “There are so many little factors that have affected how it has developed. People think they can’t chop and change – but they can. For goodness’ sake, find something you love to do because you’re going to spend a long time doing it – and if you’re passionate about it, you’re going to live and breathe it.”