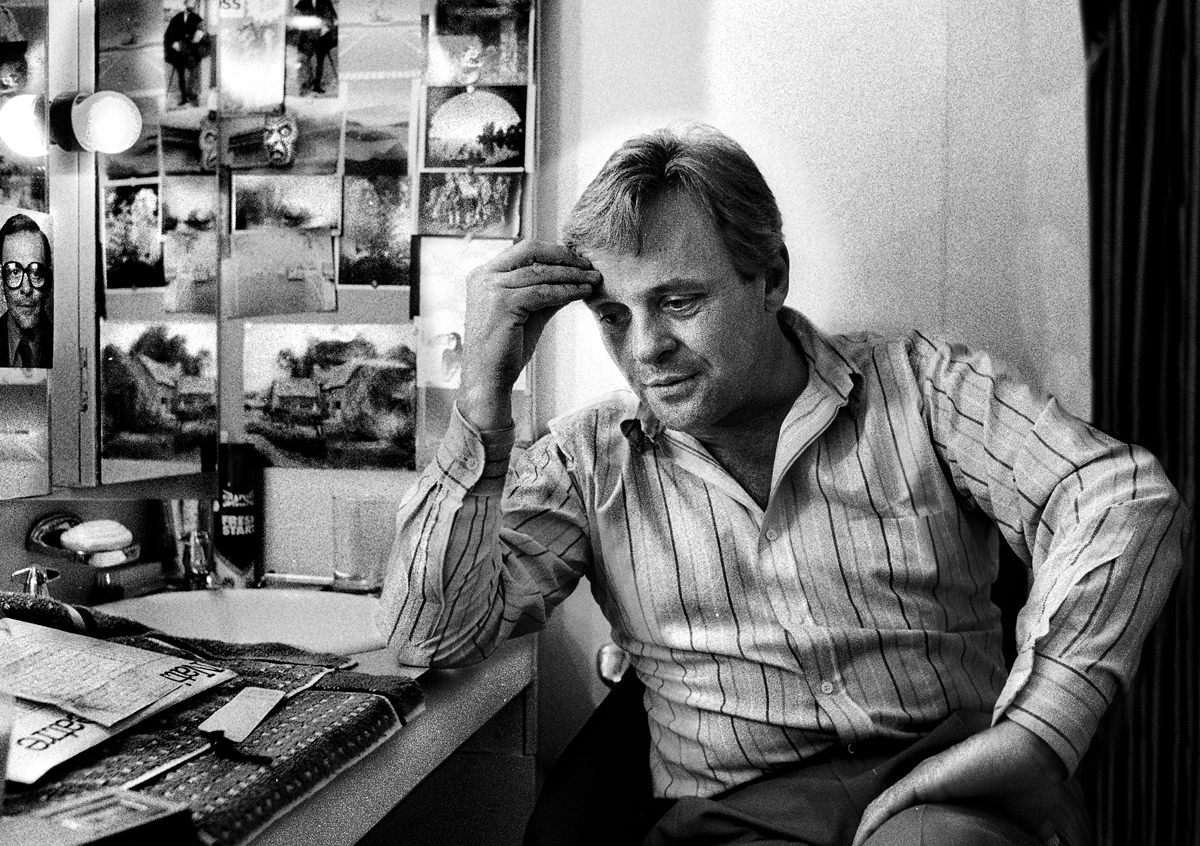 For the last 35 years, London-based photographer Simon Annand has been capturing the honest moments and serene contemplation of actors during the half an hour before a theatre performance.

Now the latest incarnation of his long-running exhibition, The Half, held in the Lawrence Batley Theatre in Huddersfield, showcases some of the most thought-provoking photographs of famous names in his career.

‘The Half’, as it’s known in theatre circles, is the half hour before actors emerge from behnd the stage curtains and step out of themselves and onto the boards.

Actors who present themselves in all manner of ways have been photographed by Annand being somebody that we rarely see: themselves.

“I hope to show the different ways in which an actor prepares for performing live in a theatre production,” Annand told Arts & Collections. “Over the 35 years there are many memorable moments connected to different generations, different styles of performance and the fun actors engage in. As many actors will tell you, the more serious the text of the play, it is likely the more fun occurs backstage.”

At a production of Charlie’s Aunt in 1982, Annand witnessed what would provide the inspiration for the exhibition.

“The idea came from seeing the difference in energy between the ebullient character that Griff Rhys Jones was playing on stage in the farce of Charlie’s Aunt and the atmosphere in his dressing room, which was more melancholic than I expected,” said Annand.

More often than not,’the half’ is an emotional journey where actors and actresses set about forgetting about their day and their real lives.

Chief Executive and Artistic Director of the Lawrence Batley Theatre, Henry Filloux-Bennet said: “The Half is one of those rare exhibitions that allows people not only to see behind the scenes at the theatre, which holds a huge amount of intrigue for people, but also to see some of the most famous faces in the world outside of their normal comfort zone.”

While the photographs in the exhibition seem to show actors in their intimate moments, Annand explains that his aim for the exhibition was not to be ‘candid’.

“The Half is not an attempt to be a fly-on-the-wall point of view. The actors have accepted an invitation from me to see their preparation through my eyes. Neither the camera nor the photographer is hiding,” said Annand.

Instead, Annand and the actors have a mutual understanding and a level of trust. He has previously described his photography process as ‘feeling first before worrying about lenses’, wanting to capture something that is more raw than prepared.

Annand has always hand-picked the actors he photographs, allowing the casting to be absent of compromise. He  selects actors who have the ability to show an honest interpretation of human nature in all its forms.

The Value of Live

Annand describes how the theatre allows for a level of photogenic images that would not be possible on the set of a film.

In a live performance, there is a level of tension that is dispersed on a film set, where the actors have to wait around for hours before being called, making the end result less immediate and less photogenic. While many of the actors that Annand has photographed specialise in film, the theatre allows a different viewpoint.

“Great actors are men and women who have the authority to shape and interpret aspects of human nature as presented by the stories they tell. The power of the actor has increased significantly in the last 40 years.

“In the absence of religion and other forms of instruction, actors have become increasingly useful in helping people to confront moral crises, whatever the context is soap opera of classical drama.

“Each member of the audience who sees the play will perceive it in a unique way. All forms are equal. To perform Pantomime or to dance and sing in a musical requires as much skill as it takes to interpret Shakespeare.

“What makes someone photogenic is the relationship that person has with themselves inside their own head. An actor, at this point of preparation for performance, is doubly photogenic as they are also constructing what they think about a fictional character” says Simon Annand.

The Half commends the idea of theatre as live performance; an experience never to be repeated in exactly the same way, a concept of increased value in the digital age.

In an age where theatre faces new challenges from new and emerging digital platforms, Henry Filloux-Bennet hopes that The Half will pay homage to tradition. “If theatre is relevant and exceptional, new and existing audiences will seek it out. We owe it to our local communities to ensure that our offer and organisation reflects the people we’re working for and with.”

Henry Filloux-Bennet said: “The exhibition allows us to put photography as an art form front and centre and that’s certainly an angle we’ll be looking at going forward.”

“Local and regional theatre should by definition be an experience that allows for everyday culture. In a world where the most high-profile art and theatre is routinely the preserve of either London or the very few major cities, we’re aiming to disrupt the expectation.”

The Half exhibition will be in Hudderfield until late February 2020 and entry is free. Like any good actor, it will then go on the road; there are plans to take it other major centres and a book based on the collection will be published in 2020.