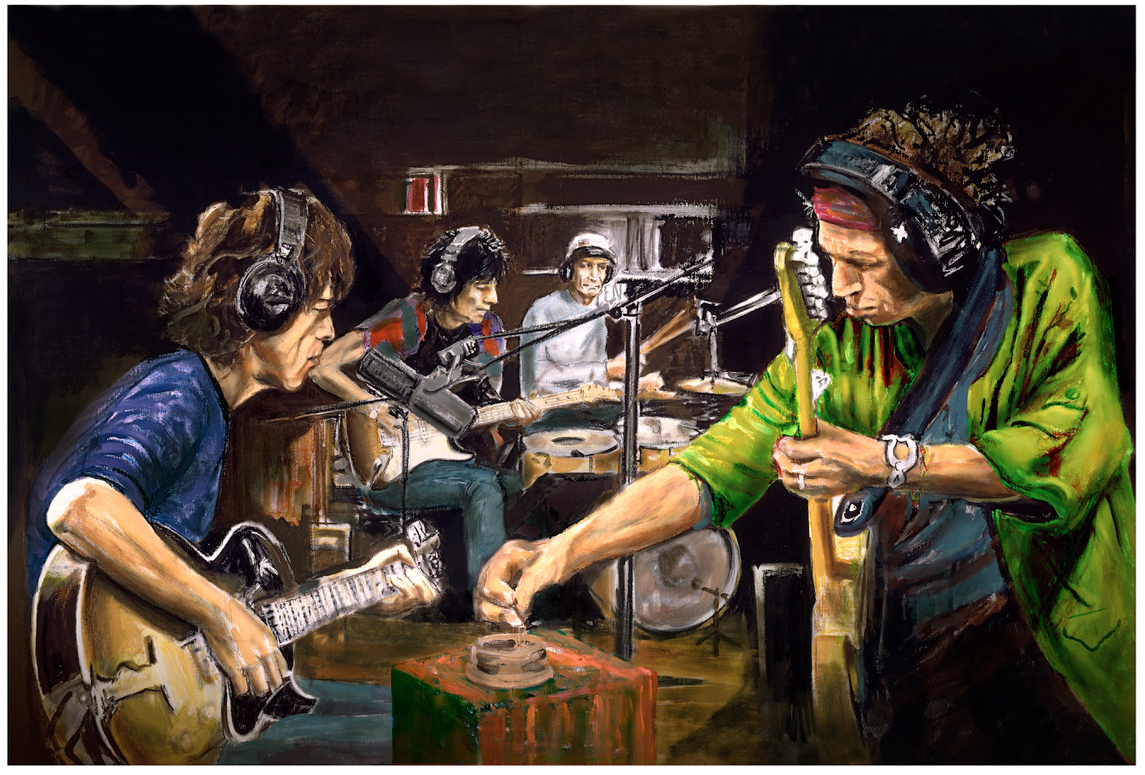 Two brand new editions from Ronnie’s sought-after Collector Series, titled Conversation and Forty Licks will be available as an edition of 295. Conversation (top of page) captures an intimate moment in the recording studio. The interplay between band members shows not only the intensity and concentration of this unique bond, but also displays a calmness. Charlie Watts, particularly, in the background, yet central to the piece appears to be keeping the whole band in check, holding his group together.

Forty Licks is an explosion of energy and colour and a curtain call to the Stones’ first forty years. This vibrant image now offered by Ronnie in a new size.

These Collectors Series prints are individually named, numbered and hand-signed by Ronnie and are priced at £495. A further three limited edition prints from Ronnie’s Group Studies will also be available for the first time. Here Ronnie captures the movement within the performance styles of Mick, Keith and himself, perfectively juxtaposing the three ‘frontmen’ to create three unique live ‘moments in time’. Striking individually or as an imposing set of images, these Group Studies are also individually named, numbered and hand-signed by Ronnie and each price at £495.

Having spent much of lockdown in his studio painting, Ronnie has also unveiled a series of previously unseen set lists from his archive that will be released for the first time. This newly discovered collection features 29 of Ronnie’s much loved multicoloured set lists from the Rolling Stones’ 2014 On Fire world tour that kicked off in Abu Dhabi and saw the band perform in Asia, Australia and New Zealand. Ronnie handwrites these colourful mementos in his dressing room before each gig when the band are touring and they have become hugely popular with fans around the world. At first it was just for fun, as Ronnie had always had a passion for calligraphy, but soon the artworks began to serve a more practical purpose. “When the Stones are on tour, we get the running order of the gig about an hour before we go on. I get focused for the show by transferring the set list onto a canvas in my dressing room, creating my own take on the night ahead. It gets me in the mood and provides a great memory of the songs played in every city each night.”

Ronnie Wood is one of the foremost rock guitarists in the world, but his artistic talents have always extended beyond music. Ronnie has continued his passion for painting and drawing in tandem with his musical career and his art is widely collected throughout the world. He received formal art training at Ealing Art College before beginning his musical career and has constantly explored his love for painting and drawing, creating art for over six decades.

Throughout his extraordinary music career from The Jeff Beck Group to the Faces and the Rolling Stones, Ronnie has never lost his passion for painting, drawing and sculpture. His paintings often denote life on the road with The Rolling Stones and Ronnie draws inspiration from live gigs and album covers, often placing loved ones – his band members, friends, family and fellow musicians – at the heart of his work, as well as creating a number of self portraits.

Ronnie’s work has been given a major retrospective at The Museum of Modern Art in Sao Paulo, and has featured in solo exhibitions throughout America, Europe and Asia. His most recent UK exhibition was in the summer of 2020 in the beautiful surroundings of Ashridge House.