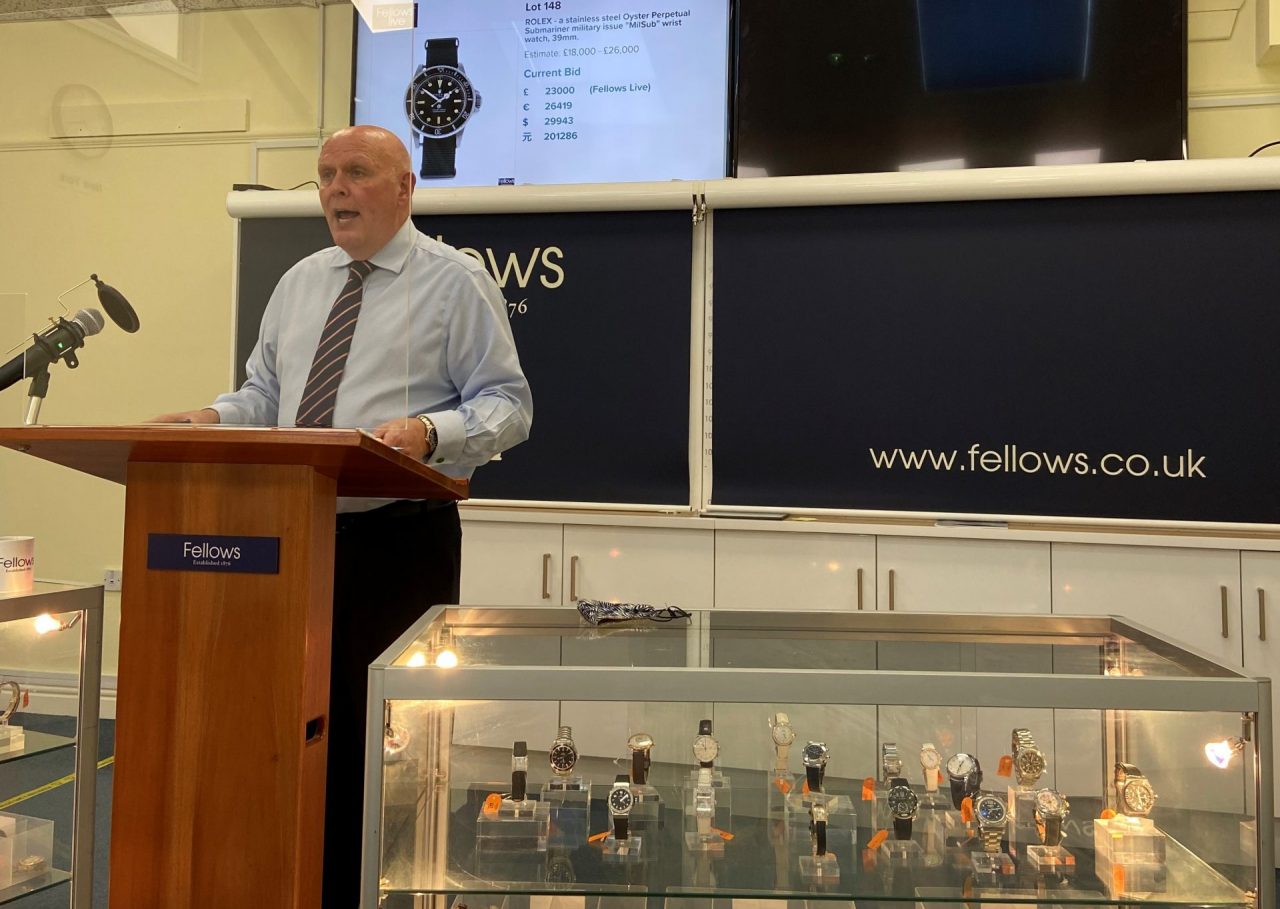 A Rolex Submariner watch worn by a British Military army diver during notable operations such as the Mary Rose recovery has sold for £29,348 at Fellows Auctioneers in Birmingham.

The classic watch was owned by a diver named Peter Melhuish, who was a part of the Royal Engineers and served in various different diving missions during the 1980s. It was worn during military service and has travelled around the globe enduring key operations including the Falklands and the Mary Rose in 1982.

In addition to the watch, the diver’s certificates, logbook, and service photographs were also sold at the auction. A diving jumper that also belonged to the Royal Engineers diver had also sold.

The MilSub watch itself is believed to be one of only 1,200 ever issued, although only a few hundred have come to light to this day.

Within the historic Submariner is a 5513 reference issued by the British Ministry of Defence during the mid-1970s. The automatic movement featured in the watch still works, and it is fitted with a ‘NATO’ dark green nylon strap, giving the watch more of a military style. The watch also includes luminous hour markers which aids with the underwater use. Overall, the watch remains in good condition.

Peter Melhuish, who grew up in Tunbridge Wells, established himself as a corporal following his successful course completion at the Royal Engineers Diving School in 1978. He continued gaining certificates, as during 1981, Melhuish further received a diver’s certificate of competence.

Melhuish enlisted himself for the army in 1979 and during the following year, requested an ownership for one of the few Rolex Military Submariners that were issued. In the following decade, he spent his time travelling around the with his fellow British army diver compatriots, involving himself in various important military operations.

One of the most famous operations Melhuish was involved in was the Mary Rose, prior to it being recovered, in September 1982. The Mary Rose is now currently on display at the Portsmouth Historic Dockyard.

Following Melhuish’s departure from the Royal Engineers in 1990, he continued to wear the watch until recently, and during the last five years, the watch has been located in a sock drawer.

The auction took place at the family-run Fellow’s Auctioneers located in Birmingham’s Jewellery Quarter on Monday 16th August. The Milsub featured in Lot 148 in Fellow’s Luxury Watch Sale and garnered a large amount of attention, as it was subject to six different bids. Previous estimates of the auction had believed the MilSub would sell in between £18,000 – £26,000 mark, however, in the end, the watch sold for an eye-watering £23,000 (£29,348 including fees). The winner of the item was a bidder through the Fellows Live internet platform.

Senior Watch Specialist at Fellows Auctioneers, Steven Yambo, stated: “We are delighted to have received so much interest for the remarkable Rolex Military Submariner. The history of this watch is amazing, it was worn during various military operations around the globe including during the raising of the famous Mary Rose.

“The Rolex Military Submariner is without a doubt one of the most exciting watches we’ve ever had the privilege of selling. It is a sheer delight to see military watches such as this receive so much attention at auction.”