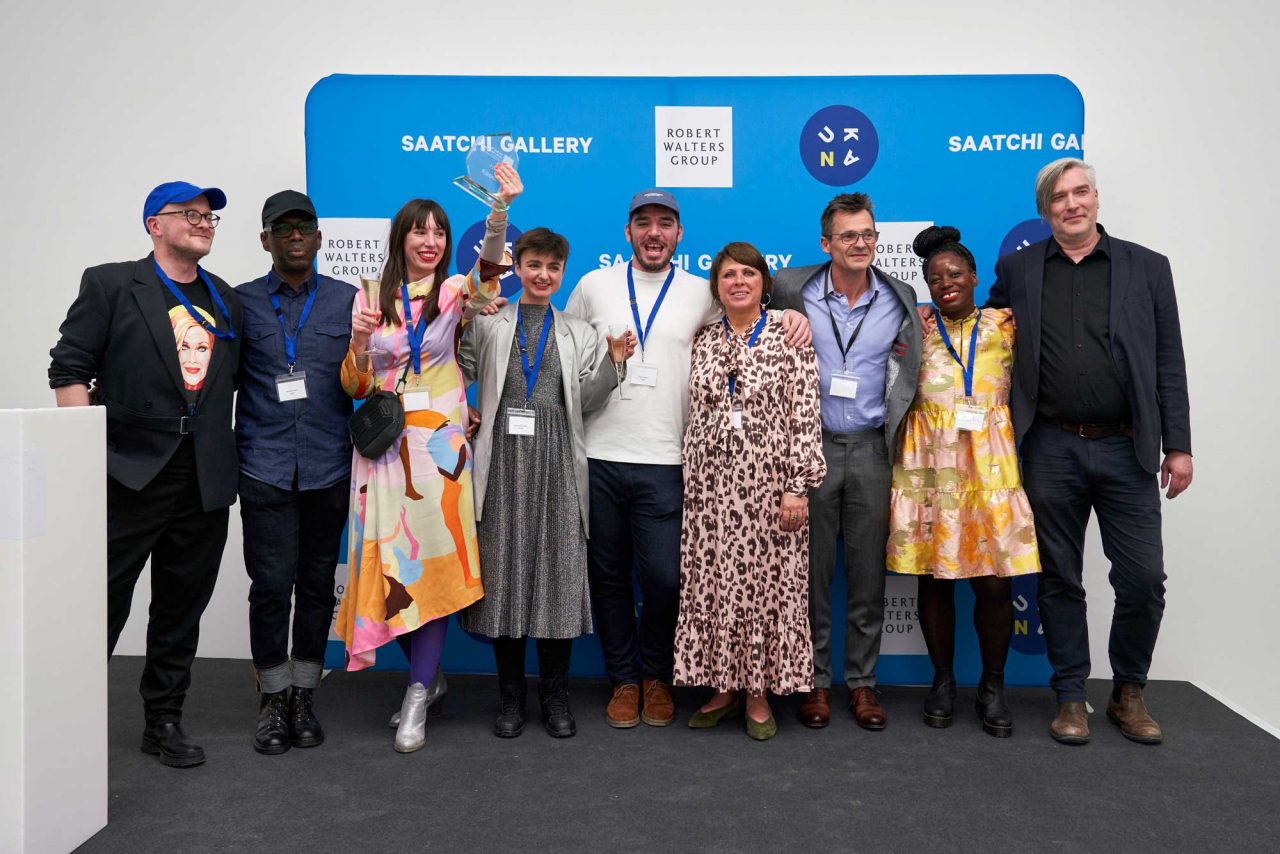 Anne von Freyburg was named as the winner of the Robert Walters Group UK New Artist of the Year Award at an awards ceremony held at the prestigious Saatchi Gallery on 4th November.

Anne was recipient of the £10,000 cash prize presented by global recruitment consultancy Robert Walters Group, after being selected ahead of the other nine shortlisted artists for work submitted within the brief of ‘Where do we go from here? Is there to be a new normal?’

Dutch artist Anne – now based in London – wowed the judges with use of quality materials, technique and commitment to the process for her winning piece ‘Feminising The Canvas.’

Anne presented a series of reconstructed Rococo portraits made out of a mixture of tapestry and contemporary fashion fabrics.

The imagery focused on a stylised idea around feminine beauty as found in the tradition of Boucher and Fragonard. Her works raised questions about taste, femininity, high and low art and the constructs of female identity.

The portraits were created with acrylic ink and then translated into hand-stitched fabrics and sewing techniques that give the work an almost bodily presence. Whilst on the one hand playful and referencing the decorative quality of their sources, the over-indulgence in these works also points to the excesses of throwaway fashion, selfies, and consumerism.

The winning piece of work will be on display at the Robert Walters Group head office in Covent Garden for 12 months.

“Historically, craft have been perceived as lesser than the ‘intellectual’ fine arts. By combining them, I am challenging this underlying hierarchical system.

“Winning the UK New Artist of the Year Award is a huge recognition for my work as well valuing textiles and craft in contemporary art today.”

Runner-up on the evening Catriona Robertson was awarded a cash prize of £5,000 to go towards the development of her future career in the industry.

Scottish artist Catriona – now living in London – impressed the judges with her use of raw materials in her installation – ‘Burrow Sprout Grow’ – which explores the architecture and the hidden spaces interwoven above and below ground within the fast-changing rising concrete landscape and urban geology.

“Being selected in the Top 10 and as a runner-up is just incredible! Sustaining a sculptural practice is incredibly difficult financially, physically, and mentally as it feels much harder to sell work or to show it in different spaces.

“Having this support platform has given me the much-needed encouragement to keep making and the opportunity be able to share my work with a wider audience after my graduation.”

The awards ceremony took place on Thursday 4th November at the Saatchi Gallery, and was curated by Garth Gratrix, an internationally exhibiting artist, curator and studio director based in the North West of England. Gratrix’s work often showcases cross-disciplinary practices in diverse and unique settings.

The exhibition will remain on view until Sunday 7 November 2021 at Saatchi Gallery, after which a virtual gallery will be launched where the public have a chance to vote for their favourite piece.

“We were so pleased to see the positive reception to the shortlisted work on display last night. Providing opportunities for ambitious professionals to achieve their potential is the foundation of our business and as an organisation it was a privilege to be able to provide such a platform for young artists in the UK. We are looking forward to the return of the Robert Walters Group UK New Artist of the Year Awardnext year.”

“The shortlist for the first Robert Walters Group UK New Artist of the Year Award has been exceptional and UKNA thanks all ten finalists for their outstanding contributions.  We would like to congratulate Anne von Freyburg on winning the award and look forward to working with her over the coming year.

“We also wish continued success to our runner up Catriona Robertson. Collaborating with Robert Walters Group and Saatchi Gallery on yet another successful awards continues to help us on our mission of reaching new audiences and supporting more new and emerging artists.”

Anne von Freyburg is a Dutch artist based in London. She studied her MA Fine Art at Goldsmiths, graduating in 2016, and her BA in Fashion Design at Hogeschool voor de Beeldende kunsten Arnhem, Netherlands, graduating in 2001. This October she is part of the Cob. x PLOP Residency in London. In 2019 she was awarded a residency at the Florence Trust in London, and in 2016 was shortlisted for the Art Gemini Prize. Anne has exhibited in London, the Netherlands, Germany, and Spain. Her work has been published in Art Scope magazine (US), Embroidery art magazine (UK), Textiel Plus magazine (NL), Art Unplugged UK, Art Verge, PAN and the dream magazine (US) and many others. Von Freyburg’s work is in several private collections all over the world.

Catriona Robertson is a Scottish/British artist living in London. Catriona graduated from the Royal College of Art, MA Sculpture and Central Saint Martins BA Fine Art. She has recently been awarded a Studio Prize at SET in Woolwich and commissioned to build a large scale installation for the SET lobby. Her most ambitious work includes creating an Immersive exhibition ‘WYRM’ part of ‘Terra Nexus’ funded by the Proposition studios at the former ITV building on the Southbank in 2021, where she produced work in response to our relationship with the ecology, soil erosion, the importance of biodiversity and the anthropocene. In 2020 she was selected for the Standpoint Gallery studio residency programme supported by the Mark Tanner Sculpture Award, and in 2019 was awarded a funded place as artist in residence at MERZ in Sanquhar, supported by Creative Scotland with a solo exhibition.