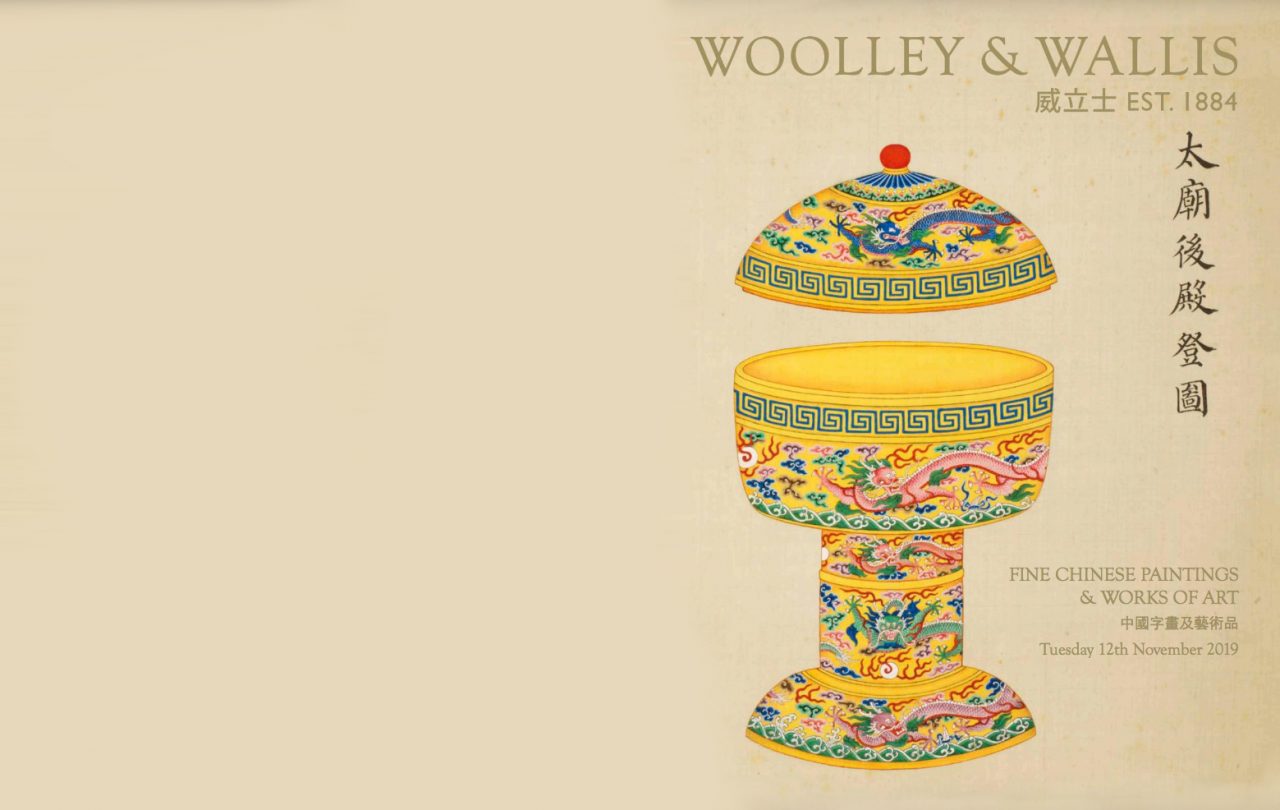 Two paintings by Chinese artist Xue Song are being sold at auction by Woolley and Wallis in Salisbury, giving English art lovers a rare chance to view and admire Song’s work.

Xue Song’s studio burnt down in the early ‘90s and the fire destroyed nearly all his work, including oil paintings and calligraphy. Up until that point the artist, in his late 20s, had been struggling to find a direction or inspiration for his work; but the fire provided him with a new determination and a wealth of material in the charred fragments that were all that remained of his early works.

Song’s collages use ash, charred remnants and soot to evoke themes of remembrance, mourning and rebirth. He combines traditional Chinese painting and calligraphy with contemporary and other elements including collage, folk art and historical photographs, and his work has led him to become one of China’s more important contemporary artists.

Only a handful of Song’s paintings have been sold at auction in the UK, and the artist has not held a solo exhibition on British soil since 2005, although his works featured in the Chinese Mind-Scape V exhibition that came to London for the first time earlier this year.

Now two of his paintings are being sold at auction by Woolley and Wallis in Salisbury. Bird and Flower is an early work of Xue Song’s, using his new techniques. Dated 1998, it was acquired by the current owner in 2000 from the ShanghART gallery in Shanghai and features bold calligraphy in ash over a bright yellow ground of paper collage. Monument on Grey Background dates from a similar time and recreates a horse painting by traditional ink artist Xu Beihong, using hundreds of images of Chinese and Western politicians, artists and icons, thus drawing traditional Chinese art together with modern techniques and Western imagery. The horse stands on a plinth of dark ash, rising from the destruction of Song’s own studio.

“Song’s art has become iconic on its own merit,” said Woolley and Wallis’s head of Chinese Paintings, Freya Yuan-Richards. “His works are instantly recognisable and his following, especially in his native Shanghai but also across the world, is growing day by day. An exhibition of his work at the Long Museum in Shanghai earlier this year shows his standing within the Chinese art market, and we are delighted to be able to showcase his works in England.”

Both works feature in the Fine Chinese Paintings and Works of Art auction at Woolley and Wallis on 12th November and each is expected to make between £5,000 and £8,000.

The sale on 12th November 2019 will feature twelve rare Imperial paintings from the Huang Chao Li Qi Tu Shi , or The Illustrated Regulations for Ceremonial Paraphernalia of the Present Dynasty (lot 6). This book was commissioned by the Qianlong Emperor and contains more than thirteen hundred leaves of illustrations and texts explaining the specifications for items used in state ritual practices. Also on offer is a massive black and celadon jade ‘yingxiong’ group (lot 123) depicting an eagle and lion-like beast. The carving comes from the collection of the Reverend Victor Farmer (1898-1977) who lived in China in the early 20th century. Other highlights include an Imperial Qianlong six character mark and period zhadou (lot 180), a rare 18th century silk floss official’s hat and box (lot 43), a painting of a scholar and bamboo by Zhang Daqian (lot 5), and an Imperial Qianlong six character mark and period lacquer tea bowl inscribed with the poem Sanqing Cha, or Three Purity Tea (lot 34).

Founded in 1884, Woolley & Wallis is a leading regional auctioneer, holding around 30 specialist sales a year, spread between nine departments headed up by leading experts in their field.Of the 14 lots to make over a million pounds at regional auction houses, Woolley & Wallis has sold 11 of them, including its top lot – a Chinese spinach-green jade water buffalo – for a hammer price of £3.4m in 2009.
High prices in Chinese contemporary art at Woolley and Wallis include a scroll painting by Zhang Daqian for £2.3m and The Northern Girl by Yang Feiyun for £1.7m.