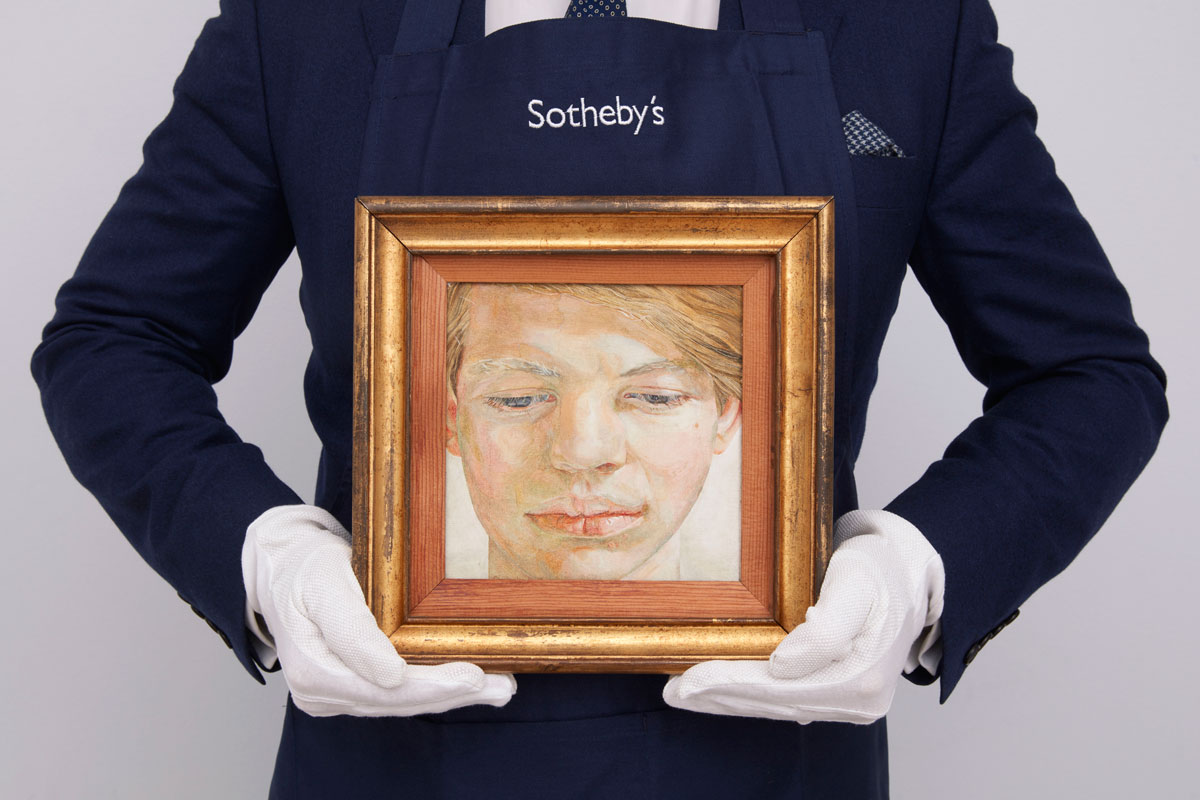 A well-known but rarely sighted portrait by Lucian Freud is heading to auction for the first time, after hanging in a legendary Irish house in the Wicklow mountains for more than 50 years.

The 1956 painting, Head of a Boy, is a tender tribute to its sitter, the late Hon. Garech Browne, wealthy Guinness heir and lifelong friend of figurative British painter Lucian Freud.

Executed at the Luggala estate by a 34-year-old Freud when Browne was just 16 years old, the small 18×18 centimetre masterpiece is a remarkable example of the artist’s early portraiture.

The intense painting is similar in size to Freud’s Boy Smoking (1950-51) and his 1952 painting of Francis Bacon, which was stolen from the Tate collection while on display in Berlin in 1988.

Head of a Boy featured at Freud’s 1974 retrospective at London’s Hayward Gallery and at a 2008 show in Dublin, but has otherwise hung in the Luggala sitting room for more than 50 years. It demonstrates a subtle colour palette, fine brushstrokes and meticulous precision.

The following passage by Browne, taken from Robert O’Byren’s Luggala Days: The Story of a Guinness House (2012), provides fascinating context to the artwork:

‘Perhaps the person from whom I learned most was Lucian Freud. He first came to Luggala with his wife Kitty. He subsequently married my cousin Lady Caroline Hamilton-Temple-Blackwood. He was painting my portrait at Luggala when the house caught fire in 1956, so he gave the unfinished version to Caroline and started again. Lucian subsequently introduced me to many interesting people, including Francis Bacon, and brought me around the Louvre.’

Freud visited the estate in the 1940s, before eloping to Paris with Browne’s cousin, Lady Caroline Blackwood, in 1953. The pair separated in 1957, barely a year after the painting in question was executed. Rarely exhibited but well recognised within Freud’s historical canon, the portrait is testament to the history both of Luggala and the artist’s oeuvre.

Tom Eddison, a contemporary art specialist at Sotheby’s, London said: ‘It is funny with Freud, you don’t really get a grip of how good he was until you see these things in person, especially these works from the 1950s which you don’t see very often.’

Indeed, only a handful of Freud’s portraits from the decade have ever come to market. The debut of Head of a Boy follows the appearance of Boy’s Head (1952) at Sotheby’s in 2011, which sold for £3.18 million.

Head of a Boy will be sold at Sotheby’s Contemporary Art Evening Auction on 5th March 2019, and has an estimate of £4.5-6.5 million.

World of fine watches on show at SIHH 2019 in Geneva