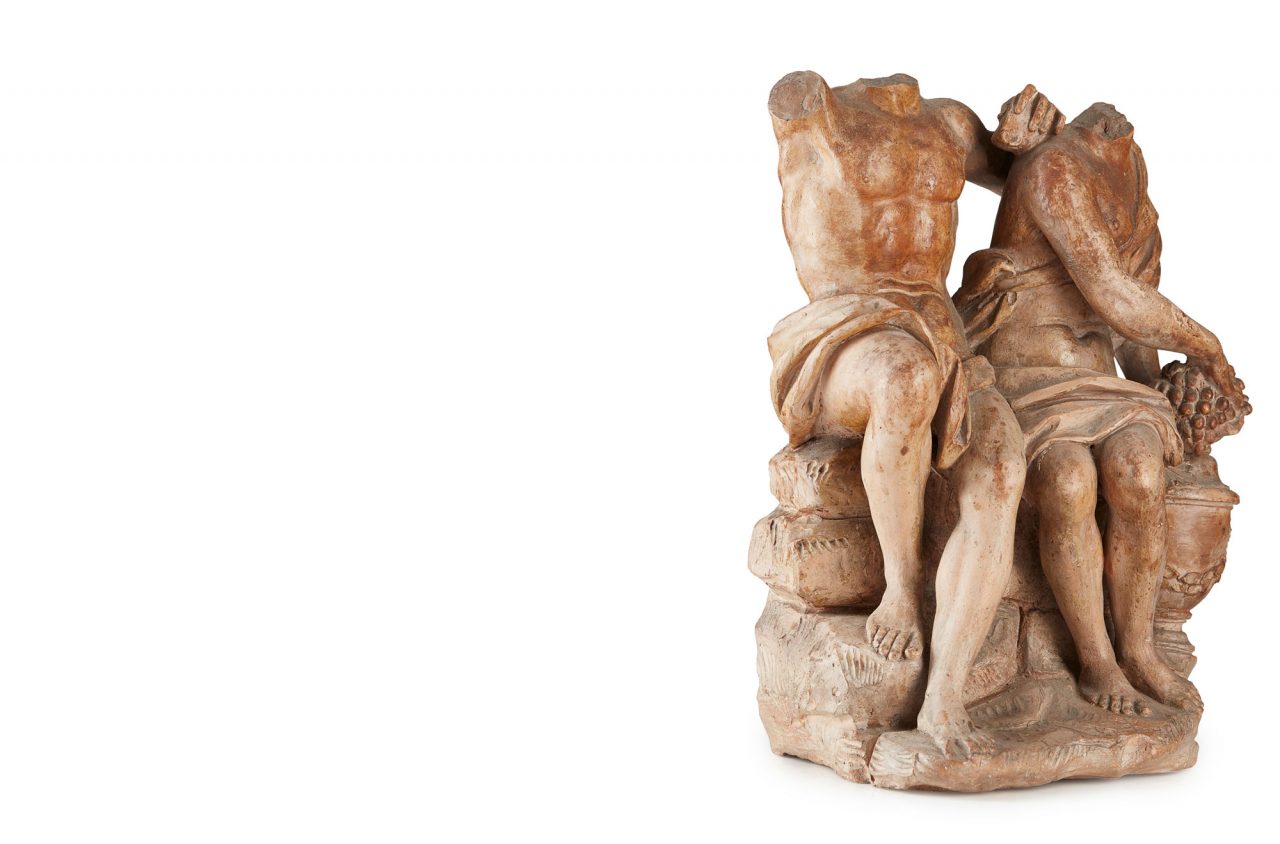 Lyon & Turnbull will be auctioning items from Balcarres House in Fife – home of the Earls of Crawford and Balcarres – on September 3rd. A highlight from the auction is a terracotta attributed to Giuseppe Piamontini (Italian 1664-1742) depicting Bacchus (god of wine) and Ariadne.

The Five Centuries auction in Edinburgh will include a selection of furniture and works of art from Balcarres House, Fife, home of the Earls of Crawford and Balcarres. Balcarres House, commanding a view across the Firth of Forth, has been home to the Lindsay family since 1595. The furniture and works of art presented in the auction on 3rd September provide a cross-section of life in a grand country house. Through these pieces, a glimpse into the public and private lives of the previous generations who called Balcarres home, is offered.

Specialist and Head of Sale, Douglas Girton, says: “The collection provides us with a rare glimpse into another world and a time gone by, and it truly captures the spirit we aim to achieve in our ‘Five Centuries’ auctions. From the rare and beautiful terracotta figure study of Bacchus and Ariadne by Giuseppe Piamontini (1664-1742), to the everyday objects like the collection of copper kitchen wares, the selection encompasses the life of a grand country house.”

The property of the Earls of Crawford & Balcarres on offer spans over three centuries of European art and interiors. Feature items include:

– as well as over 200 lots from the attics and stores of the house to include furniture, clocks, pictures and works of art. Lord Balniel, heir apparent to the 29th Earl of Crawford, commented “Balcarres continues to be our family home as we continue into the 21st century. It has been a fascinating process going on a voyage of discovery through our attics with the Lyon & Turnbull team, and we are very much looking forward to watching the pieces find new homes next month.”

The Earl of Crawford is one the most ancient extant titles in Great Britain, created for Sir David Lindsay in 1398, who married a daughter of Robert II. The title has stayed with various branches of the Lindsay family ever since. Alexander Lindsay (1618 -1659) was created 1st Earl of Balcarres in 1651, and the 6th Earl of Balcarres, another Alexander Lindsay (1752-1825), sold the estate to his younger brother Robert in 1791, who enlarged the house with a bow-fronted Georgian extension.

Subsequent additions and improvements were undertaken in the 19th century, the first headed by the Scottish architect William Burn 1839-1843, who greatly enhanced and unified the Scots Baronial design of the house, and later by another Scottish architect, David Bryce 1863-1867, designer of Fettes College. The terraced gardens have long been a celebrated feature of the house, and were described as ‘ second only in Scotland to those of Drummond Castle. Their character is truly magnificent…’

The Earldoms of Crawford and Balcarres have been joint since 1848, when James Lindsay, 7th Earl of Balcarres, put forth a claim for the Earldom of Crawford, which had remained dormant since 1808, when the 22nd Earl, George Lindsay-Crawford, died unmarried.

Previous properties owned by the Lindsay family include Haigh Hall, Greater Manchester; Dunecht House, Aberdeenshire; Stepleton House, Dorset; and a townhouse on South Audley Street, London, where some of the pieces on offer are likely to have resided at one time or another.

Depicting Dido in a gold dress and blue mantle approaching Aenaes who reclines beneath an olive tree, wearing a flowing red cloak, Dido’s head turned with her gaze to the viewer, accompanied by Cupid who bears an open jewel casket, a carriage drawn by three stamping horses on the left, within flower borders with bead and reel slips marked with cartouches, a horn, and a hunter’s bag £6000 – 8000 + fees

Giuseppe Piamontini was a close follower, only twelve years younger, of Giambattista Foggini (1652-1725), founder of the school of Florentine late Baroque sculpture, which flourished under the last members of the dynasty of Medici Grand-Dukes [Kader 1996]. He studied in the short-lived, but effective, Medici Academy founded by Cosimo III in Rome between 1681 and 1686. When he returned to Florence, the heir-apparent, Gran Principe Ferdinando (1663-1713), took a special interest in Piamontini, perhaps partly because they were almost the same age, and commissioned from him many sculptures, the first, when the sculptor was only fourteen.

The lapis lazuli circular dial with Roman number chapters, in an arched black marble case with corresponding lapis lazuli pilasters, the pediment inlaid in high relief pietra dura with an urn of fruit, and again to the base with ribbon-tied garlands of fruit, the whole with gilt bronze mounts, with a twin-train eight-day movement, signed with engraved script to the backplate HUNZIKER; £2000 – 3000 + fees

Each with carved and painted papier maché features, in elaborate dress decorated with shell and mica, with a single and later glass dome £1000 – 1500 + fees.

During the early 1800s, the Emperor Napoleon reinstated the gabelle, a highly unpopular tax on salt which brought much poverty to the North-West regions of France, who were not granted exemptions. Salt workers here, or paludiers, were exploited for their goods, only to see them being sold for high mark-ups in other regions. Yet the picturesque scenes of coastal France continued to bring many wealthy visitors, prompting locals to make souvenirs from shells and other items foraged from their shorelines. These charming dolls, often referred to as Les Poupée du Paludier, were lavish in their decoration but reflected the traditional costume of the impoverished Breton paludiers. Their widespread appeal sparked a trend in ‘shell art’ and helped to sustain the livelihoods of coastal communities in France.