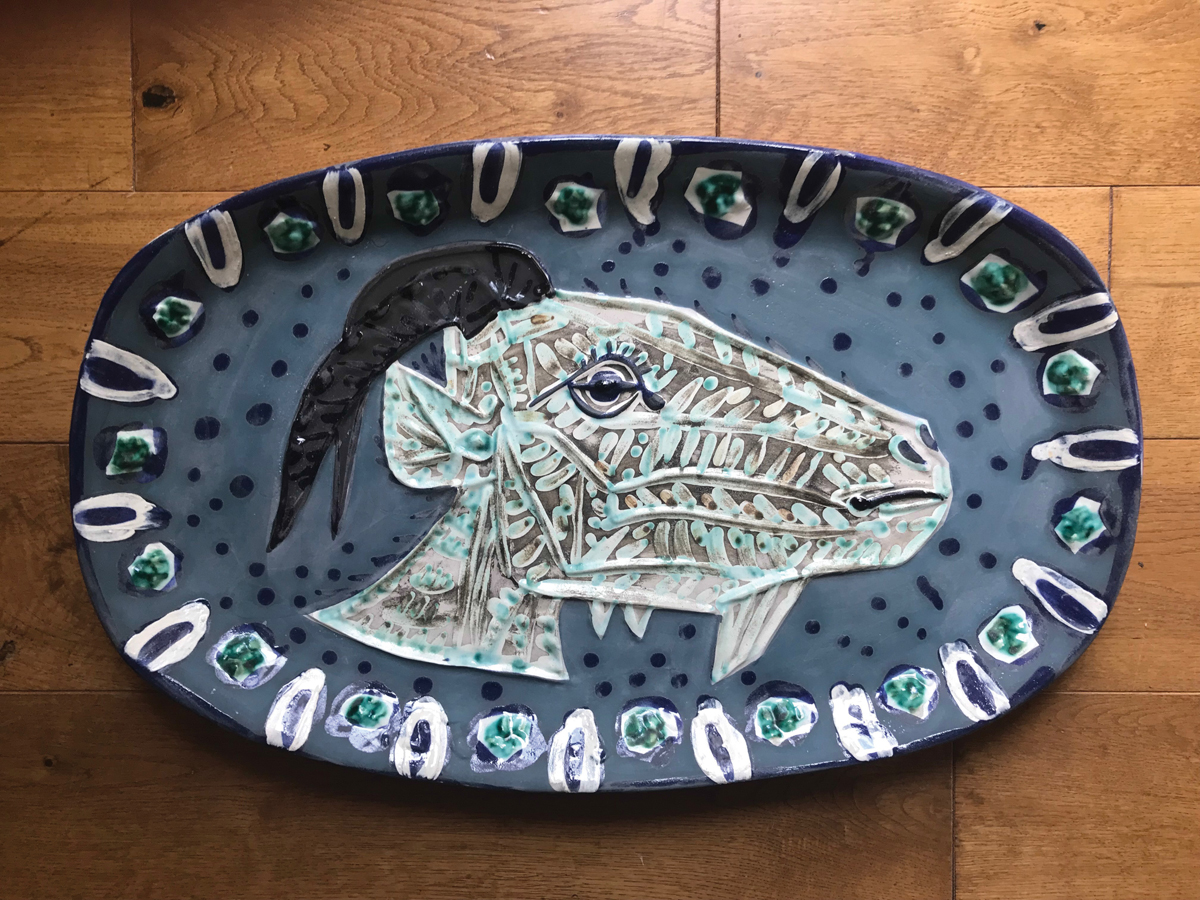 Peter Harrington Gallery of Chelsea has an exhibition of limited edition linocuts, etchings and lithographs, ceramics and books signed by Pablo Picasso, running from March 19th to April 13th.

Highlights include: Aristophanes’ Lysistrata, 1934 first and limited edition, first printing, number 1,103 of 1,500 copies signed by Picasso. This finely produced work features Picasso’s sensitive line drawings, which carefully “capture the braggadocio of both the men and women in the play”. Priced at £5,750.

Portrait d’Aimé Césaire Lauré, 1949, one of three drypoint etchings on Japon Imperial paper, signed by the artist in pencil on the lower right-hand corner, from a total edition of around 200 unnumbered impressions. This is a proof of Picasso’s portrait of the poet Aimé Césaire (1913-2008) which was used for Césaire’s 1950 work Corps Perdu, the uncorrected title page of which is also printed on the sheet, now folded and framed. Priced at £8,500.

Vallauris Exposition 1953, edition of 2000 in two sizes, this being the larger. Unknown amount signed. Signed in red crayon by Picasso lower right. Printed by Hildalgo Arnéra, Vallauris. Priced at £4,000.

Toros en Vallauris 1957. (Bulls in Vallauris 1957.), proof aside from the edition of 198, this copy unnumbered as issued. Signed in red pencil crayon lower right by Picasso. Printed by Hildalgo Arnéra, Vallauris. Priced at £6,000.

Conversations avec Picasso, 1964, first edition, first impression. Signed by Picasso on the dedication page, and inscribed by Brassai on the half-title: “Pour Maud Leclerc, avec toute son amitié, Brassai. Èze-village, 27 Dec. 1964.” Brassaï, who photographed much of Picasso’s work in the 1940s, here builds an intimate portrait of Picasso himself, recording each of their meetings with minute detail, and also offering an insight into the lives of the artistic and intellectual milieu in wartime Paris. Priced at £4,750.

Pablo Picasso (1881-1973) is perhaps the best known artist of the 20th century. His most famous paintings include Les Demoiselles d’Avignon (1907) and Guernica (1937). He collaborated with Serge Diaguilev and the Ballet Russes, creating backdrops and costumes, and with the choreographer Serge Lifar among others. Other subjects in Picasso’s repertoire include more traditional themes. The artist and the muse is a recurring motive in his career, as well as still lifes, cranes, animals, bullfight scenes and more classical scenes.

Peter Harrington is at 100 Fulham Road, Chelsea. More on the exhibition here.

Idols - The Power of Images, Records Mankind's Early Representations of the Human Body in Lavish Book