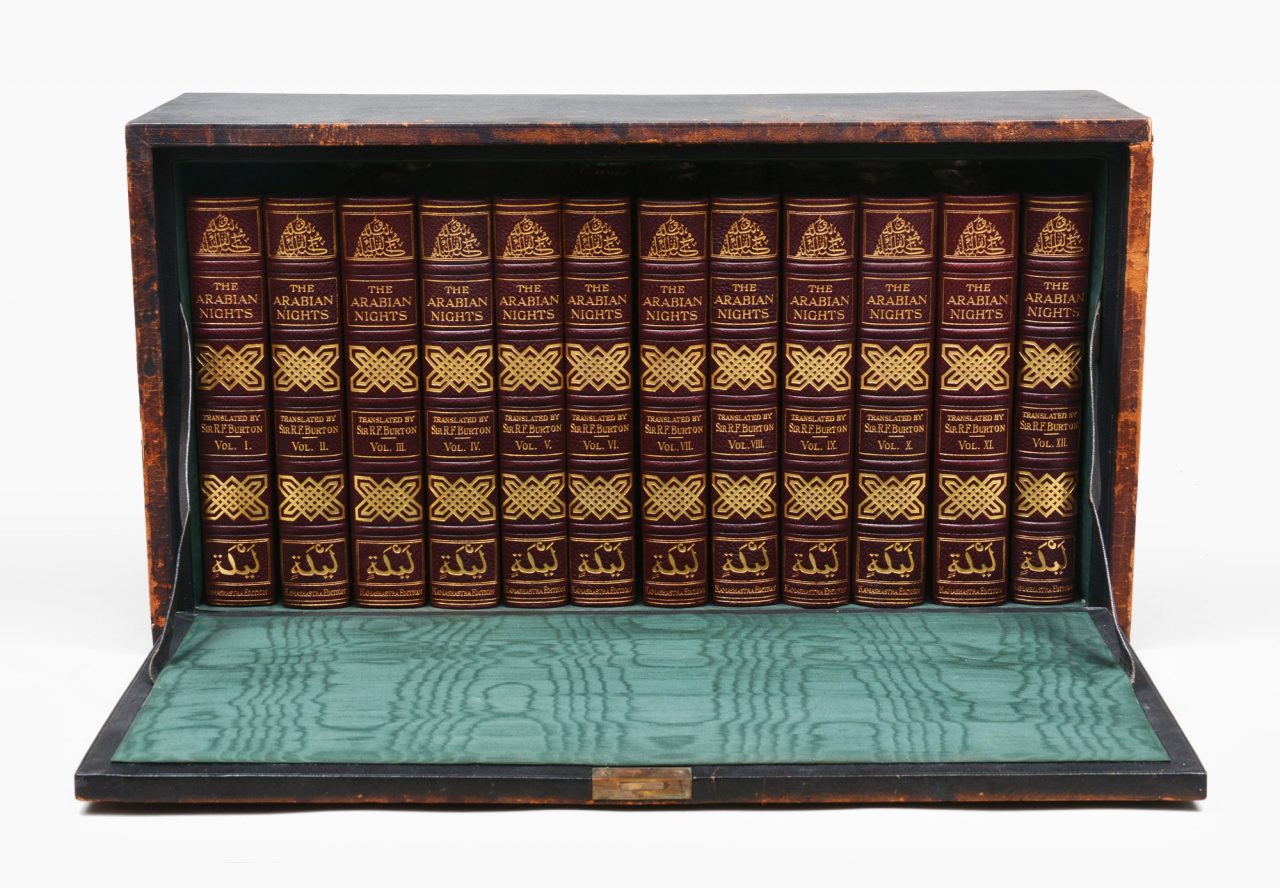 Peter Harrington’s Abu Dhabi 2020 catalogue contains a selection of 85 books and manuscripts that offer an enticing selection of some of the most sought-after and desirable works by leading lights of the Islamic and Arabic-speaking world.

According to Pom Harrington, owner of Peter Harrington, “Our Abu Dhabi 2020 catalogue reflects the incredible breadth of interest of collectors from the Arabian Gulf. It has been curated over several months to showcase selections of some of the best-loved literature and poetry, as well as seminal works of luminaries of Islamic astronomy and medicine. The collection also includes highly unusual and collectable manuscripts and guides. These document the advent of pivotal industries and the development of city infrastructure that marked the emergence of the Arabian Peninsula as a modern and dynamic economical region in the 20th century.

The selection was curated for the Abu Dhabi International Book Fair which was due to take place in the United Arab Emirates in mid-April. The fair has since been postponed to May 2021.

“There is quite a significant tradition of book collecting in the Middle East,” explains Pom Harrington. “It’s certainly not a recent phenomenon but we have seen increasing growth in recent years. Most of the interest we see is in books written about the Arabian Peninsula – particularly first-hand travel accounts from the 16th to early 20th century. Additionally, manuscripts and maps that document the development of the peninsula in the early and mid-20th century are also highly sought after – this includes maps on trade and shipping routes, political developments, oil exploration and so on.

“There is also a strong interest in early photography of the region. Works that document Mecca and Medina or early city infrastructure continue to be very popular. Additionally, the region has a highly and broadly educated population and a significant amount of institutional patronage, so landmark economical, philosophical or literary works from the Western canon are also sought after by Middle Eastern collectors,” added Pom.

Peter Harrington’s Abu Dhabi 2020 catalogue includes books of fascinating provenance and scarcity, almost all of which are rare first editions, presentation copies inscribed by the authors to personal friends and acquaintances, or sumptuously illuminated and illustrated works.

• An inscribed first edition of Khalil Gibran’s Twenty Drawings – the first and only collection of the Lebanese poet’s drawings. No other inscribed copies have been found listed in auction records. (£12,500)

• A first edition and very scarce presentation copy of Khalil Gibran’s well-loved masterpiece The Prophet. Signed or inscribed copies of the first printing of The Prophet are very scarce – only two other copies can be traced. (£12,500)

• Highly detailed planning documents of Jeddah Water Supply with the inscription “To A.A. / From D.R.B.”. Very rare – no other copies have been located or references found. D.R. B was David Ross Balfour, who led the project as a partner in his father’s civil engineering firm, D. Balfour and Son. The recipient is most likely Ahmad Ashmawi, Assistant Director of Gellatly Hankey’s Jeddah office. Ashmawi attended the inauguration in 1947, where he presented the scheme to Emir Saud on behalf of Gellatly Hankey and Balfour. (£17,500)

• An outstanding presentation copy of Seven Pillars of Wisdom from T. E. Lawrence to his solicitor Edward Eliot, inscribed on the first blank, “E. G. Eliot from T. E. ‘Lawrence’. The book is a personal and emotive narrative of Lawrence’s own role in the Arab Revolt and possibly the only presentation copy signed in Lawrence’s “true” name. (£85,000)

• Part V of The Canon of Medicine by Ibn Sina, known in the West as Avicenna – often regarded as the most influential writer in the history of medicine. (£75,000)

• First edition of Charles M. Doughty’s Travels in Arabia Deserta. His famous account, which comprises almost 1,000 pages of painstaking detail, was much favoured by T. E. Lawrence, who used it as his main guidebook to the region nearly 30 years later. (£1,950)

• A rare travel guide to the region in Arabic for oil company employees of the Iraqi Petroleum Company. The company was formed in 1925 and began to grab concessions across the region throughout the 1930s and 1940s. (£2,250)

• A first edition, presentation copy inscribed by Gertrude Bell of Hafiz, Shams al-Din Muhammad Poems from the Divan. Bell’s translation received a favourable critical reception on its publication and was long regarded as the best free-verse translation into English of the revered Persian poet. This is the only true presentation copy inscribed at the time of publication that has been able to be traced. (£8,750)

• A striking and handsome Library Edition set of Richard F. Burton’s translation of The Book of the Thousand Nights and a Night (seen at top of page). Illustrated by a series of 71 original illustrations reproduced from the original pictures in oils specially painted by Albert Letchford, the 12-volume set retains the imposing box which has kept it in lovely condition. (£12,500)

• Large and sumptuously illuminated Qur’an from the 17th-century Mughal period in India (£62,000)

The Abu Dhabi 2020 catalogue is presented in two sections – the first with material relating to the Islamic and Arabic speaking world as noted above, and the second with highlights of Western literature.

• Highlights from the Western section include Napoleon I’s manuscript notes on reading Adam Smith’s Wealth of Nations (£250,000)
• A particularly handsome set of Blaue’s Grooten Atlas (Atlas Major) – hailed as “the greatest and finest atlas ever published” (£750,000)
• A first edition of the Origin of Species by Charles Darwin (£225,000).

All items in this catalogue will be available for sale online at www.peterharrington.co.uk

While Peter Harrington’s stores in Mayfair and Chelsea are temporarily closed on account of the evolving Covid-19 pandemic, its online store is open and specialists are available to give consultations by Zoom video chat or FaceTime – buyers can email mail@peterharrington.co.uk to set up an appointment, or if they have any other questions.

Peter Harrington’s mail order delivery service is also fully operational and all national and international online orders are being fulfilled as normal.

The Other Art Fair Launches Online Studios With Saatchi Art