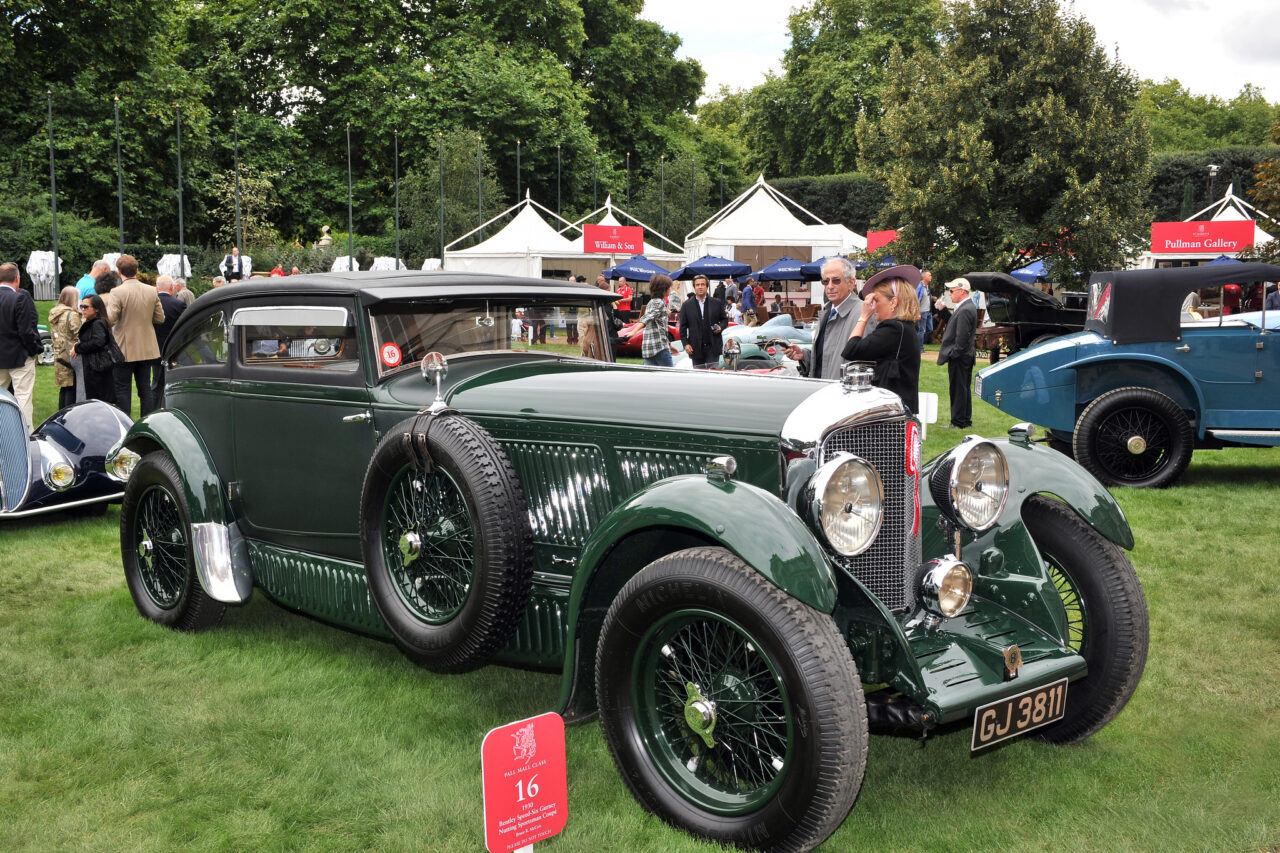 The Concours of Elegance, presented by A. Lange & Söhne, is set to present a spectacular 10th anniversary show, welcoming back some of the astonishing previous winners of the coveted ‘best in show’ crown.

Among the returning Concours victors will be the 1930 Bentley Speed 6 ‘Blue Train’ Coupe that took home the best in show prize at the 2013 show edition. The imposing British machine sported a raked coupe body, which was designed and built by coachbuilders Gurney Nutting. Performance matched the imposing, dominant looks; the Speed 6 was powered by a 6 ½ litre-Le Mans spec engine, putting out 180 bhp, enough to propel the imposing machine to nigh on 120 mph. The car rose to fame and gained its nickname after the Bentley owning playboy Woolf Barnato – perhaps the definitive ‘Bentley Boy’, and one-time company chairman, raced the famous Blue Train north through France.

While drinking at a party, Barnato claimed that he could beat the train on a run from Cannes on the glamorous Côte d’Azur to Calais. Despite the absence of autoroutes, Barnato convincingly beat the train, indeed, he won by such a margin that he crossed the channel on a steamer, and made it to London before the train pulled to a halt at the station in Calais. In all he’d covered around 700 miles – all at a remarkably fast pace – averaging 43 mph on the dusty, uneven roads of France. While there is debate over the exact car that completed the journey, it was the Gurney Nutting coupe that became associated with Barnato’s exploits, and known as the ‘Blue Train’, as a result. A wonderful car from an enchanting, fearless period in British automotive history.

Also returning will be the glamorous winner from 2016, an incredible, one-off 1938 Hispano-Suiza Dubonnet Xenia. This dramatic, art deco motor car, with its aero-inspired bodywork was developed by André Dubonnet, an inventor, racing driver and World War One fighter pilot. Dubonnet chose an H6 Hispano-Suiza engine for his creation, and commissioned Jean Andreau to design the incredible, streamlined body. Jacques Saoutchik then brought the design to life, featuring curved glass, sliding doors and a panoramic windscreen. This outrageous car wowed the crowds back in 2016 at Windsor Castle, and is set to enthral guests all over again at Hampton Court in a few weeks’ time.

Another car making a triumphant return will be the Best in Show winner from 2020, a 1969 Porsche 917 KH. The endurance racing Porsche was a crowd favourite throughout that event two years ago, with its imposing design and incredible backstory. In 1970, Hans Herrmann and Richard Attwood drove this very same 917 KH (short-tail) in the world-famous red-white Salzburg design to the first ever overall win for Porsche at the famous Le Mans 24 Hours. The 917 marked the first time Porsche competed in the league of immensely powerful, large-capacity racing cars. Its 580bhp 4.5-litre 12-cylinder engine set new standards, and is still legendary today.

These superb former winners will join the display of over 70 rare and spectacular Concours Cars at this September’s glamorous event. Further star cars are set to be announced in the coming weeks. Outside the main display of vehicles, the Concours of Elegance will assemble around 1,000 further cars in a series of special features and displays, as well as a live collector car auction by Gooding & Co.

Concours of Elegance CEO, James Brooks-Ward, said: “As our 10th anniversary event at Hampton Court Palace fast approaches, we are delighted to announce the return of these former ‘Best in Show’ winners. These exceptional motor cars have each stood out in consistently exceptional fields, so having them all together in the Palace grounds at the start of September will be very special indeed. It’s the perfect way for us to celebrate our decade of success. We cannot wait to welcome guests to our event – now just three weeks away – which is set to be our most spectacular yet.”

Away from the automotive displays, Concours of Elegance will once again be an occasion of pure luxury, with champagne provided by Charles Heidsieck, picnics by Fortnum & Mason, and a collection of art, jewellery and fashion displays. Presenting Partner A. Lange & Söhne will once again showcase some of its most intricate timepieces.

The event returns to Hampton Court Palace from the 2nd to 4th September and tickets are available now from £35 for half-day entry, with full three-course hospitality packages from £320. Tickets can be bought from concoursofelegance.co.uk/tickets