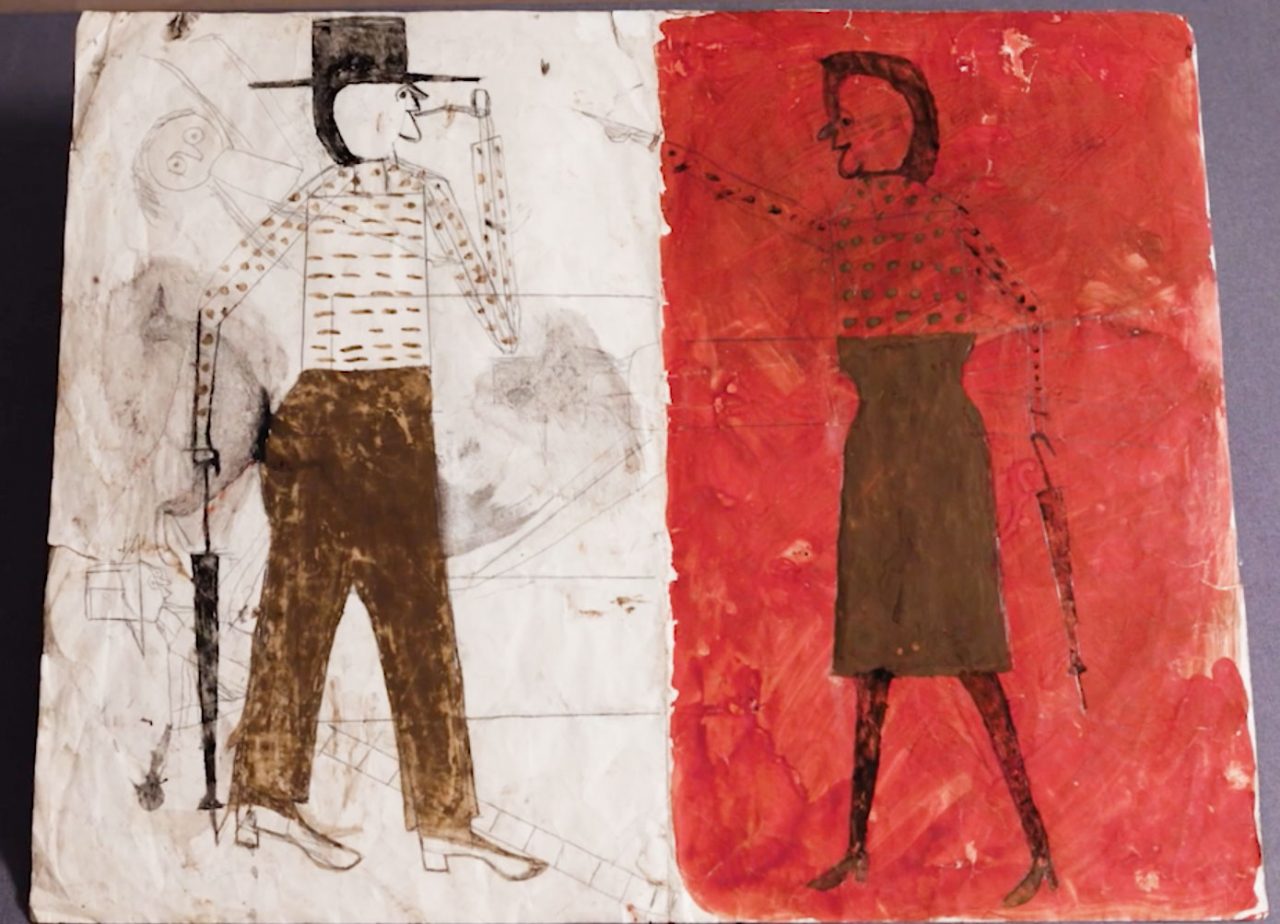 The hammer spoke. On January 17th, 2020 – 35 years after the death of Jean Dubuffet, a work by Bill Traylor, born into slavery in 1853 – was sold for $507,000. The auction record for the artist was set for Man on White, Woman on Red/Man with Black Dog (above) by the African-American artist Bill Traylor, a two-sided piece that Steven Spielberg gifted to Alice Waters in 1985 after the shooting of The Colour Purple was completed.

If Bill Traylor’s name is fresh news to you – if the genre known as ‘self-taught’, ‘outsider’, and ‘Art Brut’ is only vaguely familiar – if the Dubuffett reference leaps out as a curious juxtaposition, then you might enjoy some insight into what is one of the most dynamic, deeply expressive, and refreshingly authentic areas of art collecting.

While there are debates about the nuances of the category – who fits into it, who fails to qualify – think of ‘Outsider’ artists as those who have not been academically trained, or work outside the mainstream, who are self-taught and who are responsive to an internal calling first and foremost. Some were – and are – schizophrenics, autistic, and otherwise mentally challenged.

Others held quotidian jobs. Camille Bombois worked as a labourer in France; Henry Darger as a hospital custodian in Chicago; Charles Dellschau was a butchery and saddlery sales clerk; Felipe Jesus Consalvos toiled as a cigar roller. Bill Traylor, who spent the majority of his life as a sharecropper and farmer, and only discovered his talent as an artist at the age of 75.

The post-war crystallisation of these disparate talents, who are united by a complete detachment and dissociation from the traditions, structures, conceits and embedded mental frameworks of art history came as the result of the passion and fascination of Jean Dubuffet. In 1947, Dubuffet wrote the Art Brut Manifesto, in which he coined the term; the author John Maizels, who wrote the book Raw Creation writes sagely that “Art Brut translates literally into English as Raw Art… because it is ‘uncooked’ by culture, raw because it came directly from the psyche, and, in its purest form, touched a raw nerve.”

Dubuffet was fascinated by the art of the mentally ill as far back as 1923, when he read Hans Prinzhorn’s Artistry of the Mentally Ill. More than twenty years later he defined Art Brut by writing “We understand by this term works produced by persons unscathed by artistic culture, where mimicry plays little or no part (contrary to the activities of intellectuals). These artists derive everything – subjects, choice of materials, means of transposition, rhythms, styles of writing – from their own depths, and not from the conventions of classical or fashionable art.”

Beyond his manifesto, Dubuffet – as an essay on the website of the Outsider Art Show notes – “dared to collect and exhibit” the work of “eccentric isolates” – those not just ignored, but not even considered worth the attention of those serious about art and artist. It took great courage.

Dubuffet was also a mighty buyer, and his Collection de l’Art Brut ended up in Lausanne, Switzerland, in 1976. As the same essay notes, “This unique collection might well have remained in isolation, if not for the publication of a 1972 study of art brut entitled Outsider Art written by the British scholar Roger Cardinal.” Cardinal was a driving force in solidifying the genre and evangelising for its practitioners to be recognised as “artists” as much as those who emerged through conventional apparatuses of access. His definition of the self-taught artist has not lost its relevance, especially as we often debate who qualifies and who does not: “The critical definition of the creative ‘Outsider ‘is that he or she should be possessed of an expressive impulse and should then externalise that impulse in an unmonitored way which defines conventional art-historical contextualisation.”

There is no shortage of superb books on ‘Outsider Art’, and the American Museum of Folk Art’s bookstore is a savvy curation of many of the best, and a great place to begin your journey.

In a world where there is a hunger for authenticity, where we are surrounded by imagery conceived to manipulate, where so much of conventional art is coolly calculated and slavishly attuned to context, the unmediated freshness of ‘Outsider Art’ will only grow in its allure and the emotional connection it creates with those drawn to its raw directness and commanding honesty.

XO is the first digital marketplace for private aviation, where you can instantly book an entire charter or single seats on private jets. Sign up now & enjoy $1,000 in promo credits to use towards flights or to offset the cost of membership! Use Code: ArtsCollections.