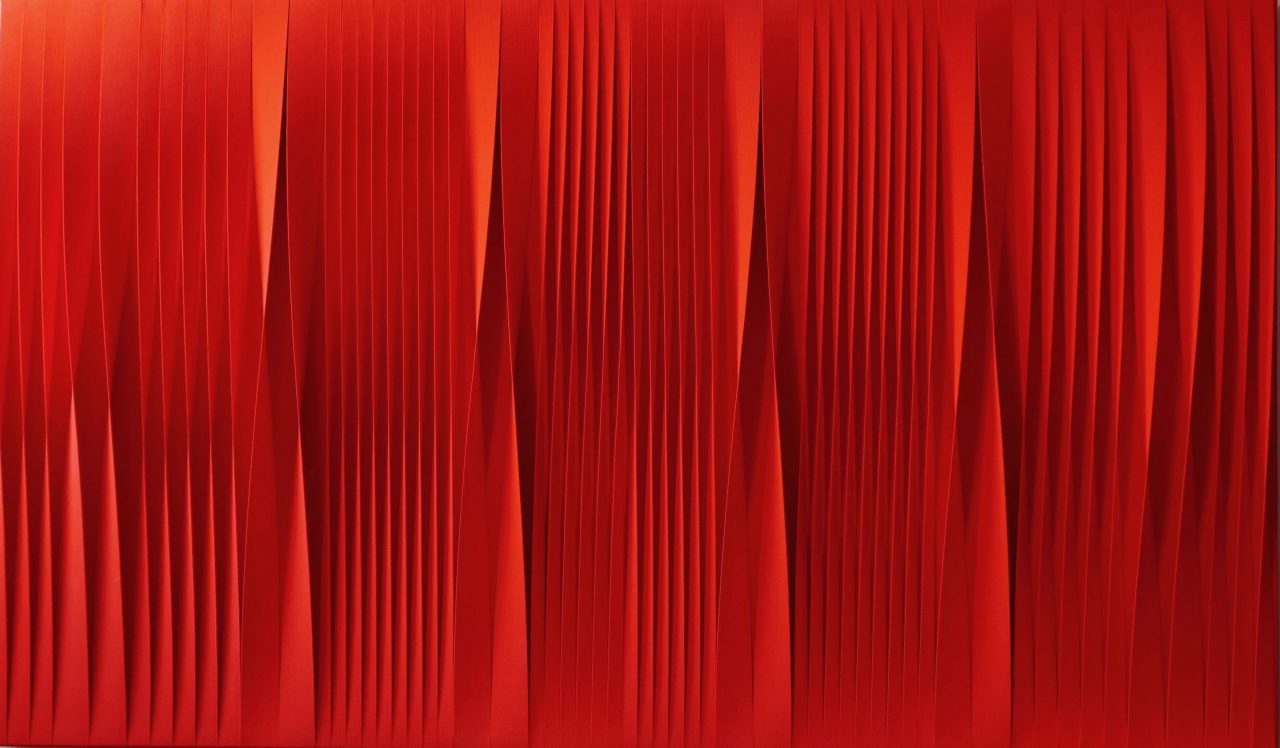 Focalising on the art movement of Spatialism, Opera Gallery will be launching the exhibition Spaziale, featuring some of Italy’s most renowned artists of the twentieth century, including Lucio Fontana, Agostino Bonalumi and Enrico Castellani. The exhibition will open from the 17th to the 29th of May 2019. Other key names of the aesthetic movement being represented by Opera Gallery are Marcello Lo Giudice, Pino Manos, Turi Simeti, Fabrizio Plessi and Umberto Mariani.

Created in partnership with the Italian Embassy in London, the official vernissage will be set at the Italian Embassy in front of H.E Ambassador Raffaele Trombetta; an array of artwork specially selected for the occasion will additionally be presented at the Embassy. This is the first time the Opera Gallery London has exhibited works associated with Spatialism, and comes as Spatialism’s founder Lucio Fontana has his first major US retrospective at the New York’s Metropolitan Museum, which will be displayed thereafter at the Guggenheim in Bilbao.

Despite being born in Argentina in 1899, Lucio Fontana’s life was also shared between Rosario di Santa Fe and Milan, the birth place of his parents. In 1927 Lucio Fontana chose to reside in Europe and thereafter was one of the first Italian artists to examine abstraction. During World War Two he returned to Argentina and established a private art school known as the Altamira Academy. Alongside the running of the art school, he liaised with other artists and students to write the Manifesto Blanco or White Manifest.

The 1946 novel introduced Spatialism, and he returned to Milan to dedicate his time to compiling research to support his new aesthetic movement and creating art works oriented on dominating space. He immersed himself into his art works and one of his foremost spatial concepts or Concetti Spaziali involved the application of different mediums on slashed tableaus.

After his death in 1968 in Comabbio, Italy, Lucio Fontana became a highly referenced name for his pioneering research into creating the aesthetic movement, Spatialism. His work is exhibited in Paris’ Centre Pompidou, the Tate in London, the MoMa in New York and other major museums.

The aim of Spatialism is concisely summarised in Lucio Fontana’s own words, “I do not want to make a painting; I want to open up space, create a new dimension, tie in the cosmos, as it endlessly expands beyond the confining plane of the picture.”

Associated with the ZERO movement, Bonalumi was central to the post-war Italian avant-garde with one of his most distinctive styles being the creation of vinyl-coated monochromatic canvases. The canvases were shaped from a detailed stretcher and the result would provide the illusion of an invisible force pushing out from underneath. He referred to the end product of these creations as Picture-Objects. The composition of these Picture-Objects expanded to include metals and he increased the scale of his work to construct installations.

Born in 1930 in Castemassa, Italy, Enrico Castellani was a major impetus behind the European post-war avant-garde. Working with Piero Manzoni, he co-founded the experimental Journal, Azimuth and the Galleria Azimut.

He studied painting and sculpture at the Académie des Beaux-Arts in Paris and architecture at the École Nationale Supérieure in Belgium. Castellani’s artistic oeuvre combined material and structure; he would use a nail gun to implement a relief surface that would induce tone and contrast via the different depressions in the surface and raised areas. Usually, his canvases were left monochrome, though in the 1970s and 1980s he embraced materials such as aluminium.

His works are included in numerous major public collections, including the Centre Georges Pompidou, Paris; the Fondazione Prada, Milan; the Peggy Guggenheim Collection, Venice; and the Hirshhorn Museum and Sculpture Garden, Washington, D.C.

Marcello Lo Guidice was an artist highly influenced by the Arte Informale movement, spreading across Europe after World War Two. The movement’s categorisation overlapped into pictorial abstraction and painterly dynamism, placing an emphasis on the formal elements of art, for example the treatment of pigment.

In the 1980s, Marcello Lo Guidide began a solitary pursuit into researching the metamorphism of matter, the purity of colour and the dispersion of light through abrasions, cracks and sedimentations.

His work has been featured in numerous exhibitions and can be found in major public collections and museums such as the Zagreb Museum of Contemporary Art in Croatia, the Museum of the Ministry of Foreign Affairs in Rome in Italy, the John Elkann Collection, the George Segal Collection and the Phillip Morris Collection. It has also been exhibited in major museums such as the Ludwig Museum and the Russian Museum in St. Petersburg.

Pino Manos migrated to Milan in 1951 to attend the Academy of Fine Art in Brera with Enrico Castellani and Vincenzo Agnetti. Concurrently, at the Politecnico of Milan he invested his time in studying architecture. Inspired by the rich artistic life of Rome, he began a brief stay there before moving to Florence to finish off his education in architecture.

In 1980 he founded ‘The Creative’ in Milan, an association pioneering art therapy, to encourage the use of creativity to aid with releasing untapped potential, augmenting communication and expression. The methodology generated positive results in individuals with drug addictions and disabilities.

Mariani’s work alludes to three-dimensional Spatialism of the Italian avant-garde. The artistic components he is best recognised for are his complex monochrome lead draperies, which analyse the illusions of light and shadow residing in the folds of the draperies’ fabric. Occasionally, Umberto Mariani would accentuate the form of the drapery by reintroducing a ‘forma celata’ (hidden form), where the curtain obscures the object.

He has been widely exhibited in prominent institutions such as the Palais des Beaux Arts in Brussels, Belgium; the Musée d’Art Moderne in Paris, France; the Musée d’Art Contemporain de Montréal, Canada; or the Galleria Nazionale d’Arte Moderna in Rome, Italy. He recently had a retrospective at the Mudima Fondazione in Milan.

Fabrizio Plessi was born in 1940 in Reggio Emilia, Italy. In addition to being one of Europe’s most influential video artists, he has established himself in film, performance, sculpture and installations. An early pioneer of video art, Plessi was one of the first artists to experiment with the medium in Italy. Trained as a painter, he began adding moving images to his work in the 1960s. As early as 1968, his multidisciplinary practice concentrated on the natural elements with water in particular becoming the main theme of his works, due to its primordial and mystical associations. Subsequently, from the 1980s and onwards, Plessi began to meditate on the relationship between art and technology and our relationship with the environment both built and natural. He began integrating his images of elemental forces like water, fire and lava in large-scale “terrestrial” constructions of stone and wood.

By capturing the elements and contrasting them with the built environment, he questioned and challenged ideas about history, memory, and landscapes. In 1987, Plessi achieved worldwide recognition when his iconic and monumental work Roma was exhibited at Documenta 8 in Kassel, Germany.

Turi Simeti was born on Sicily, Italy, in 1929. He is affiliated with Spatialism and the ZERO group. Simeti embarked upon his successful career as an artist in 1962, developing the oval motif that would be a keystone of his work for decades to come.

Known for his minimalist, monochrome canvases, Simeti worked alongside other members of the avant-garde such as Yves Klein and Piero Manzoni. He has attempted to develop an irregular writing system that liberates the surface of the canvas from the old principles of materiality. Simeti’s works exist not as single entities but as an active experience of colour, shape and shadows that ultimately captures the dynamism that exists between these aesthetic elements.

For booking enquires regarding the Spaziale exhibition at the Open Gallery, visit: www.operagallery.com/london

Wine, Art and Property: The Rise of Alternative Investments