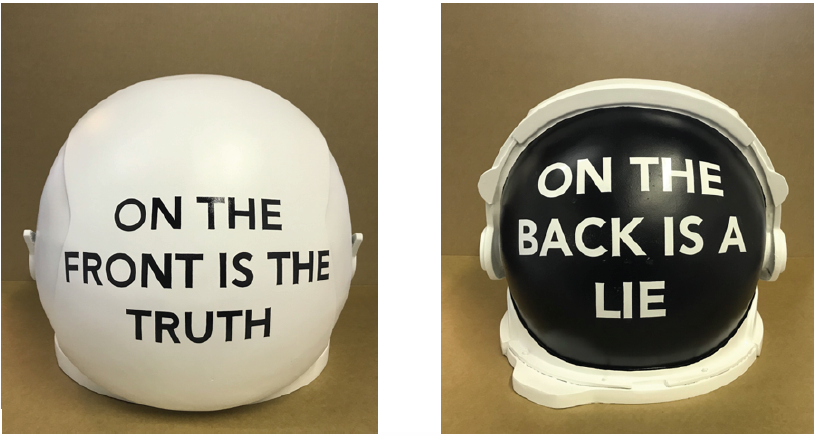 Hayden Kays, One Small Step. The Other Art Fair July 2019

The fiftieth anniversary of the Apollo 11 moon landing on the 20th of July in 1969 is celebrated once again in the mesmerising One Small Step exhibition launched by The Other Art Fair. The exhibition features a total of twelve artists to reflect the twelve men to have walked on the moon.  The line-up includes an assortment of helmets from Anish Kapoor, Joana Vasconcelos, D*Face, Mr. Brainwash, Bran Symondson, UnSKilled Worker, Philip Colbert, Hayden Kays, Ben Eine, Dan Baldwin, Alison Jackson and Chris Levine.

The impetus for the exhibition celebrating the Apollo Moon’s landing was curator Ben Moore’s sell-out 2013 exhibition Art Wars, where some of the world’s leading artists were given Star Wars stormtrooper helmet replicas to transform. The astronaut helmets have been specially created by artist Schoony and LifeCast.

All profits garnered from the sale of the featured helmets at the exhibition, which will be sold through the online auction service at Paddle 8, will go to the Mines Advisory Group (MAG). The charity aims to resolves the problems arising from uncleared landmines and unexploded bombs, where one small step marks the difference between saving a life and ending it.

Curator of One Small Step, Ben Moore commented: “It’s incredible to think that only 50 years ago we first landed on the moon, which has been our loyal companion in the night sky since the beginning of time as we know it. I believe that one day soon when we have conquered the limitations of speed the planets will become like new countries in our universe and we will begin a new chapter of space travel and planetary colonisation. Through this all I hope planet Earth will always remain our home – safe and secure.”

Speaking of the sale’s proceeds, CEO of MAG, Jane Cocking responded, “Every day, twenty people are still being killed or injured by landmines and unexploded bombs so we’re thrilled to be able to raise vital funds for our work through this unique and exciting exhibition.”

The One Small Step exhibition was unveiled as part of the first summer edition of The Other Art Fair on the 4th to the 7 July, for public display in The Crossing, King’s Cross, one of London’s largest and most exciting redevelopments, and the capital’s creative neighbourhood.