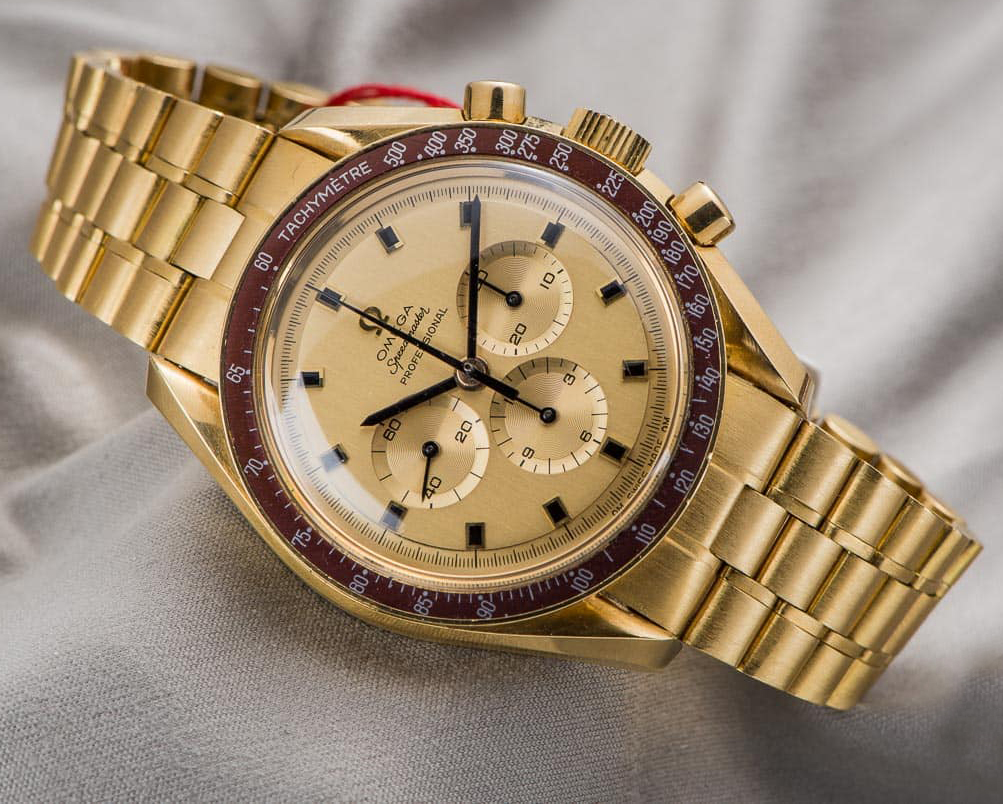 Omega’s latest chronograph model, the Speedmaster Gold, pays tribute to the crew of Apollo 11 on the 50th anniversary of their epic voyage to the moon.

Fifty years ago, when mankind took its very first steps onto the surface of the moon, the Omega Speedmaster was there, strapped to the wrists of the astronauts. This year, Omega pays tribute to their legacy with the new Apollo 11 50th Anniversary Limited Edition model of 1,014 pieces.

Four months after Apollo 11 reached the moon in 1969, Omega held a special “Astronaut Appreciation Dinner” in Houston, Texas, where the gold Speedmaster BA145.022 was presented to NASA’s astronauts. Only 1,014 of these models were produced between 1969 and 1973, and they remain hugely sought-after by collectors. Watches given to astronauts were inscribed with the phrase “to mark man’s conquest of space with time, through time, on time”, while publicly sold watches stated, “First Watch Worn on the Moon” and “Apollo XI 1969.”

Following the design of the famous BA145.022, Omega has produced a new Limited Edition model in a unique new alloy known as 18K Moonshine gold. There is a bezel in burgundy ceramic and a vertically-brushed gold dial with hour markers in facetted onyx. On the inside, the watch is driven by the manual-winding Omega Master Chronometer Calibre 3861 – complete with burgundy markings and several 18K Moonshine gold parts. In a paler hue than traditional 18K yellow gold, Moonshine gold offers high resistance to the fading of colour and lustre over time.

The anti-magnetic chronograph features 5 bar (50m) water resistance, a 42mm case, a flat scratch‑resistant sapphire crystal with anti‑reflective treatment on both sides, and an inner decorative caseback ring, crafted from 18K Moonshine gold and blackened, featuring a partial world map of the American continent and a domed lunar meteorite inlay, representing the true proportions of the Earth and the Moon. Other features include a small seconds dial, tachymeter, and transparent case back. Power reserve is 50 hours.

The Speedmaster Gold Apollo 11 Anniversary Limited Edition is available in a limited edition of 1,014 from July, at £26,500.

Watch Winders out of Passion

World of fine watches on show at SIHH 2019 in Geneva