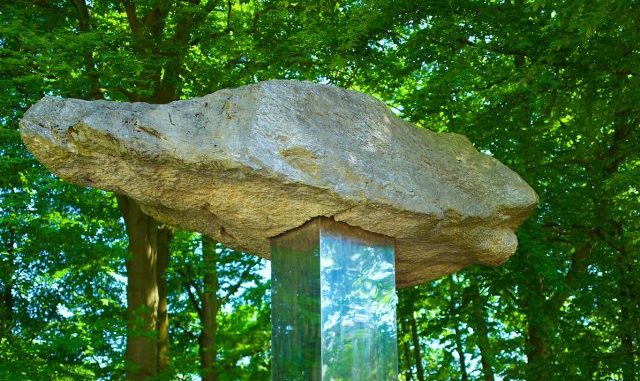 Nobuo Sekine, the avant-garde Japanese sculptor and artist, passed away this week. Nevertheless, his work will be remembered for its role in catalysing Mona-ha, the post-war Japanese art movement. From 1968 through the 1970s, Nobuo Sekine put forth the ideas central to the ‘Mona-ha’ movement, which translates to the ‘School of Things’.

The movement eschewed elements of contemporary, Western art and more specifically, the notion that an object’s signification could be dictated or determined by its craftsman. Alternatively, the Mona-ha proposed an object’s artistic denotation was cemented in its relationship to space and subversively, these spaces also acquire meaning through the objects in them.

Consequently, artists were no longer simply the creators of art works and were ‘let loose’ from their pieces in all sense of the term. Artists of the Mona-ha destroyed their art installations following a period of time and these pieces could not be purchased either; a stark contrast to the commercialisation of contemporary, modern art today at auction houses. The disassociation of the artist from the work and destruction of pieces refers to the heavily, charged and unstable socio-political climate across Japan in the 1960s.

University students, including the members who formed the Mona-ha, led the protests against the conflict in Vietnam and against constraining campus policies. Aligning themselves with Marxist predicates, the protestors enacted discord into the streets of Japanese society. Their frustration additionally stemmed from the chemical poisoning at the Chisso chemical factory, with multiple employees dying as result of mercury poisoning.

The turning point across the movement itself and in Nobuo Sekine’s artistic oeuvre was his installation of Phase-Mother Earth at the Kobe’s Sumarikyu Park for the First Open Air Contemporary Sculpture exhibition. The installation encompassed a hole situated in the ground, that was approximately 2.2 metres in diameter and 2.7 metres in terms of depth; Koshimizu Susumu aided with the creation of the installation. Soil from the hole was gradually extracted and thereafter, placed into a cylindrical mould made of wood and rope.

In an unpublished manuscript titled in Japanese, Aru kankyô bijutsuka no jiden, Nobuo Sekine recalls the moment when the mould was first removed, “Faced with this solid block of raw earth, the power of this object of reality rendered everybody speechless, and we stood there, rooted to the spot… I just wondered at the power of the convex and concave earth, the sheer physicality of it. I could feel the passing of time’s quiet emptiness… That was the birth of ‘Mono-ha.’

The formulation of the cylindrical installation required immense patience and acuteness and therefore aligned itself with major, eastern philosophical principles such as Zen Buddhism. Moreover, through incorporating basic materials, for example wood to create the mould, the installation ensured artistic input was limited. The simplicity was a prerequisite for the artistic disassociation required for Mona-Ha.

After the success of Phase-Mother Earth, Sekine exhibited the Phase of Nothingness at the Venice Biennale in 1970. His sculpture involved a natural stone on top of a vertical cuboid of stainless steel. The stone suspended into space by the steel, forces the spectator to question the space surrounding the installation, via its unsettling and precarious positioning.

Nobuo Sekine resided in Europe following the Venice Biennale, before returning to Japan in 1973 to launch Environmental Art Studios. Nonetheless, Nobuo Sekine returned to Europe and settled there from 1978 to 1979 for a solo exhibition, which spanned the Künsthalle Dusseldorf, Germany to Kröller-Müller Museum in Otterlo, Netherlands and the one of the world’s finest art museums based in Humlebæk, Denmark’s, the Louisiana Museum of Modern Art.

Other prominent exhibitions regarding Nobuo Sekine and the Mono-ha movement consisted of: The National Museum of Art in Osaka’s Reconsidering Mono-ha (2005), Beijing Tokyo Art Projects’s What is Mono-ha? (2007) and Blum & Poe’s Requiem for the Sun: The Art of Mono-ha which occurred in Los Angeles, 2012.