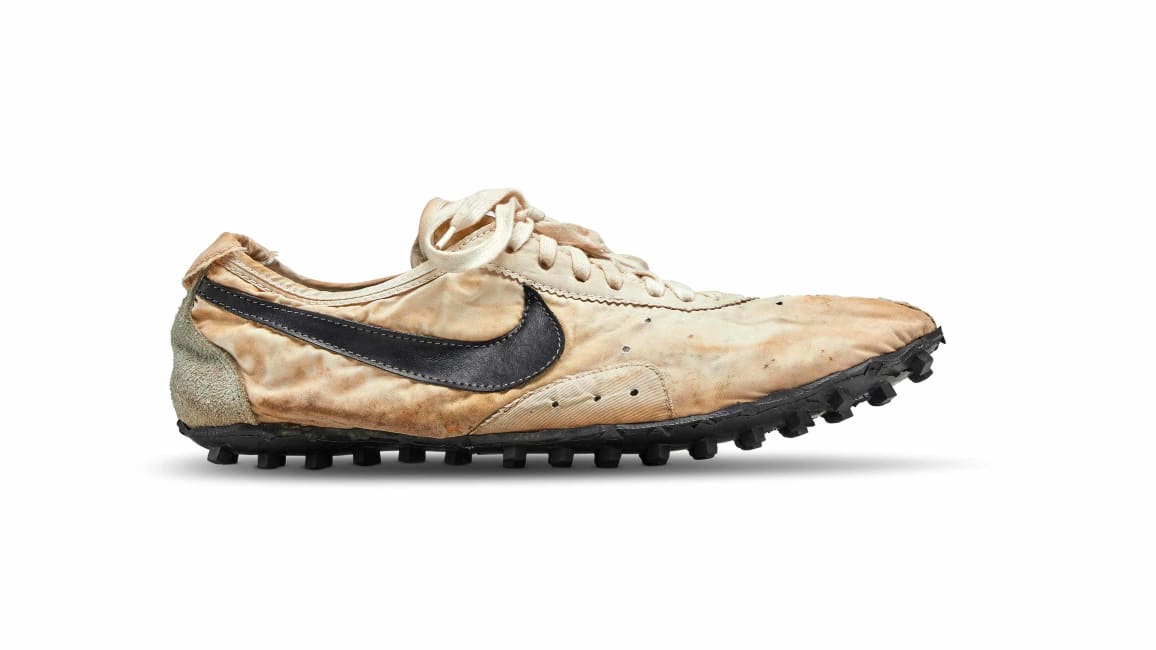 Are you the ultimate hoarder of sneakers? Well, we have nothing but good news for you – Sotheby’s in New York have partnered up with Stadium Goods to present “The Ultimate Sneaker Collection Online.”

In addition to an astonishing 100 pairs of the rarest sneakers, the highlight of the auction will include one of Nike’s original pair of running shoes, otherwise known as the 1972 Nike Moon Shoe. Geoff Hollister handmade the 1972 shoe, according to the instructions of Nike’s co-founder, Bill Bowerman. Although Nike “Moon Shoes” were worn during the year’s Olympic trials by athletes such as Bruce Mortenson, a runner with five marathon victories and a national masters record, this pair of Nike “Moon Shoes” from Sotheby’s are the only pair to have never been worn.  The sale of the Nike “Moon Shoes”, whose name was inspired by the “astronaut footprints” it left behind, ties in with the impending fiftieth anniversary of the Apollo Moon Landing on the 20thof July. (Sotheby’s has now reported that the rare pair of “Moon Shoes” have been purchased by collector Miles Nadal for $437,500. Collector Miles Nadal aims to present the sneakers at the “Dare to Dream Automobile Museum”, which is his own private museum based in Toronto.)

Other rare, historic sneakers include two pairs of Nike Mag sneakers from 2011 and 2016, which were inspired by Back to the Future films.  The Nike Mag sneakers were sold as part of a limited edition to fundraise for the Michael J. Fox Foundation, the largest non-profit funder for pioneering research into Parkinson’s disease. The 2011 Nike Mags featured in the collection are one of the 1,500 pairs produced and in reference to the Back to the Future series, featuring a subtle, light up strap and shoe sole.

Speaking of the collection of rare sneakers, John McPheters, co-founder of New York-based Stadium Goods, stated: “We’ve long talked about how sneakers are this generation’s luxury fashion, and being able to collaborate with a brand with the history and esteem of Sotheby’s is further proof of that.”

The auction sale will be ending on the 23rdof July and the line-up will include other limited-edition sneakers from Kanye West’s Yeezy collection, Air Jordan and Adidas.

The full details of the “Stadium Goods: The Ultimate Sneaker Collection Online” at Sotheby’s can be viewed at http://bit.ly/Ultimate-Sneaker-Collection .

Online bidding will close on the 23rdof July.

Are You Concerned About Being Exposed to Unnecessary Wealth Taxes?

César Pelli: The Architect of One Canada Square in Canary Wharf dies at 92