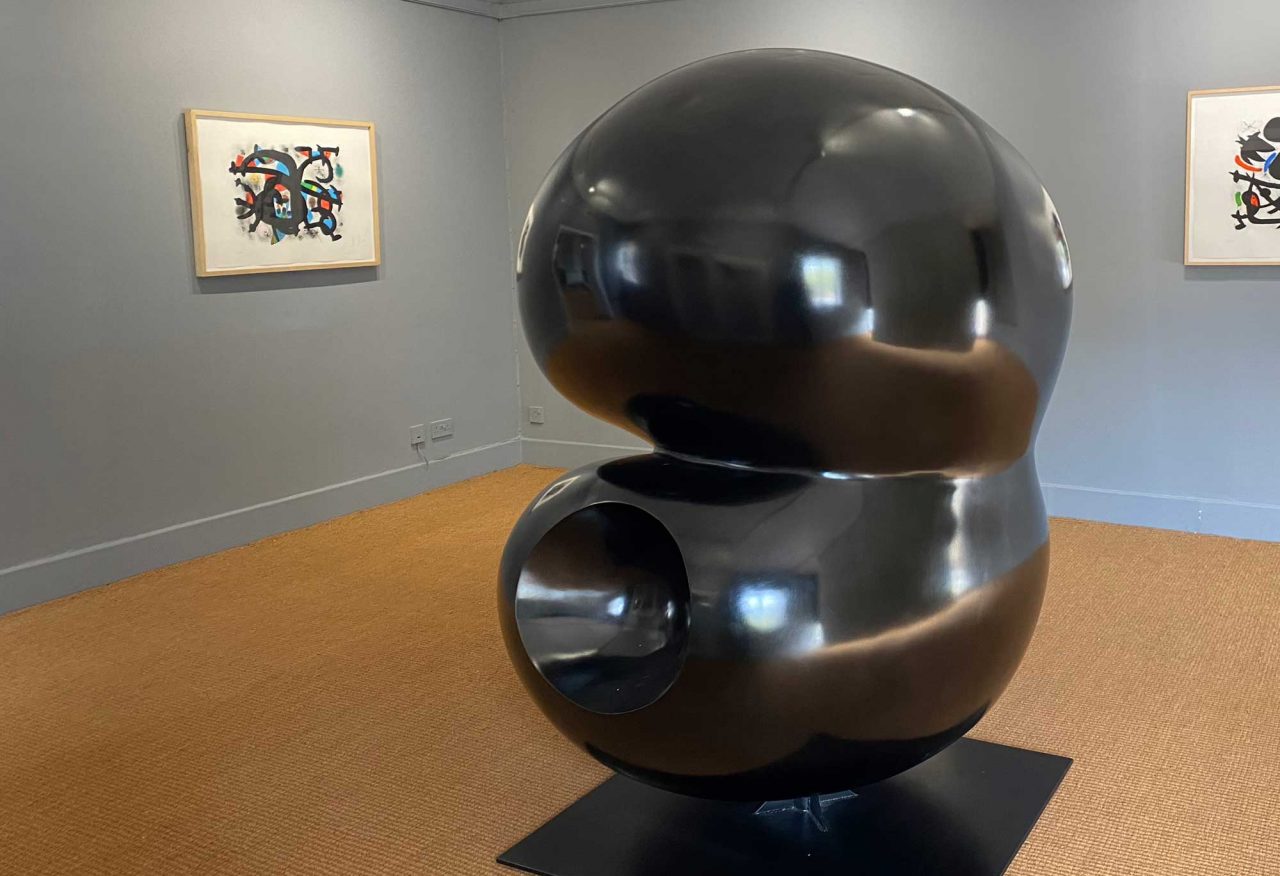 Newlands House presents Joan Miró: La Gran Belleza, an intimate retrospective of the artist’s work, within the historic setting of Newlands House in Petworth, West Sussex from 1st May 2020 to 4th July 2021.

Reopening to the public following the national lockdown, Newlands House announces details of its third exhibition, Joan Miró: La Gran Belleza (1st May to 4th July 2021): a survey of significant works by the pioneering modern master.

At the height of the Spanish Civil War in 1937 Miró created an anti-war mural for the Paris World Fair, which was shown alongside Picasso’s Guernica. Miró’s first major museum retrospective was held at the Museum of Modern Art, New York, in 1941. After the war, Miró gained international recognition as he continued to experiment freely with different mediums, including ceramics, printmaking, painting, book illustration, and sculpture.

His work was included in the first Documenta exhibition in Kassel in 1955 and in 1958 Miró received the Guggenheim International Award for his murals in the UNESCO building in Paris. His work has been interpreted as Surrealism but with a personal style, sometimes also veering into Fauvism and Expressionism. He was notable for his interest in the unconscious or the subconscious mind, reflected in his re-creation of the childlike. His difficult to classify works also had a manifestation of Catalan pride.

In 1975 Miro set up the Fundació Joan Miró in Barcelona as a centre for the study and exhibition of contemporary art. During Miró’s lifetime retrospectives took place at the Musée National d’Art Moderne, Paris (1962); Grand Palais, Paris (1974) and in 1978 the Musée National d’Art Moderne, Paris, exhibited over five hundred works in a major retrospective of his drawings. His work is held by almost every major museum in the world. Joan Miró died aged 90 in 1983, in Palma de Mallorca, Spain.

Joan Miró: La Gran Belleza will feature artworks spanning Miró’s artistic career from the 1930s to 1980s. Presented in the historic market town of Petworth, in Newlands House’s Georgian building, Joan Miró: La Gran Belleza offers an opportunity to intimately engage with Miró’s practice in a remarkable space in the heart of the South Downs. The exhibition is guest-curated by Dr Javier Molins, a specialist in Pablo Picasso, Joan Miró and contemporary art.|

The exhibition’s title, Joan Miró: La Gran Belleza (translating to The Great Beauty), draws inspiration from Miró’s desire to explore beauty and joy in life – a commitment which led him to pursue a career in art. Spanning a combined total of 39 prints, works on paper, sculptures and a painting, the exhibition features iconic pieces, including Paris Mât (1971) and Torse (1969), as well as some lesser known works such as Homme et Femme (1977).

Joan Miró: La Gran Belleza also marks Newlands House Gallery’s launch of Descendants, a series of online conversations between the grandchildren and children of 20th century masters. Uncovering personal aspects of each artist as told by their descendants, the conversations will reveal alternate histories of the artists, removed from academic perspective. Guest speakers include the descendants of Joan Miró, Pablo Picasso, Lucien Freud, Henry Moore, Eduardo Chillida and Lynn Chadwick, among others. Free to access, the conversations will take place live online the first Wednesday of every month from May to September 2021. Visitors can sign up via the Newlands House website. All footage will be made available on the Newlands House Gallery YouTube channel after the event.

Joan Miró: La Gran Belleza has been curated in close conversation with the Miró family and Galerie Lelong Paris, and is the artist’s first solo show to take place in the South East of England and third in the UK in the last seven years.

Dr Javier Molins, guest curator at Newlands House, comments:
“In this exhibition we find fifty years of Miró’s output in a journey that begins with a work from 1931 and ends with a series of prints from 1981, enabling us to chart how his work evolved over the decades. We can see in this exhibition the personal universe of Miró with his unique and recognizable style that has made him one of the most important artists of the 20th century.

“My hope is that Miró’s practice, presented in the intimate setting of Newlands House, provides visitors with an optimistic antidote to the most recent lockdown in an environment that feels comfortable as we return to the world outside our own homes. Miró – having lived through crises like the Spanish Flu and Civil War – responded to hardship with calls for peace and optimism.”

Newlands House is a new gallery inspired by the historic associations of Petworth and Sussex with great artists, writers and designers from times past. It seeks to reinvigorate this legacy with the vitality of modern and contemporary art and design shaping contemporary culture. In the intimacy of a converted home, Newlands House sits at the centre of Sussex’s burgeoning cultural scene, spanning museums, art centres, festivals, vineyards, nature trails and stately homes.

In 2020, the gallery opened to great acclaim with two inaugural exhibitions, a tribute to Helmut Newton and a survey of top works by designer, architect and artist Ron Arad. Set in the heart of the South Downs, Newlands House invites visitors to engage with the work of the greatest artists in an unexpected, Georgian setting, contrasting to white cube environments the art historical canon is predominantly presented in.

On the occasion of Joan Miró: La Gran Belleza and to celebrate the end of the lockdown, Newlands House will offer all school groups free entry to the exhibition.

Descendants series:
Individuals can sign up for free via https://newlandshouse.gallery/ to attend the live virtual talks between Newlands House Gallery and descendants of leading 20th century artists. All conversations will be recorded and circulated via the gallery’s Youtube channel.

50% Student discount on weekdays and 50% discount for NHS workers.

How to get there:
Newlands House is approximately 60 miles from London, accessible via train (one and a half hours approximately).

The closest train station is Pulborough, which is a 20-minute bus drive or a 10-minute car drive to the gallery.