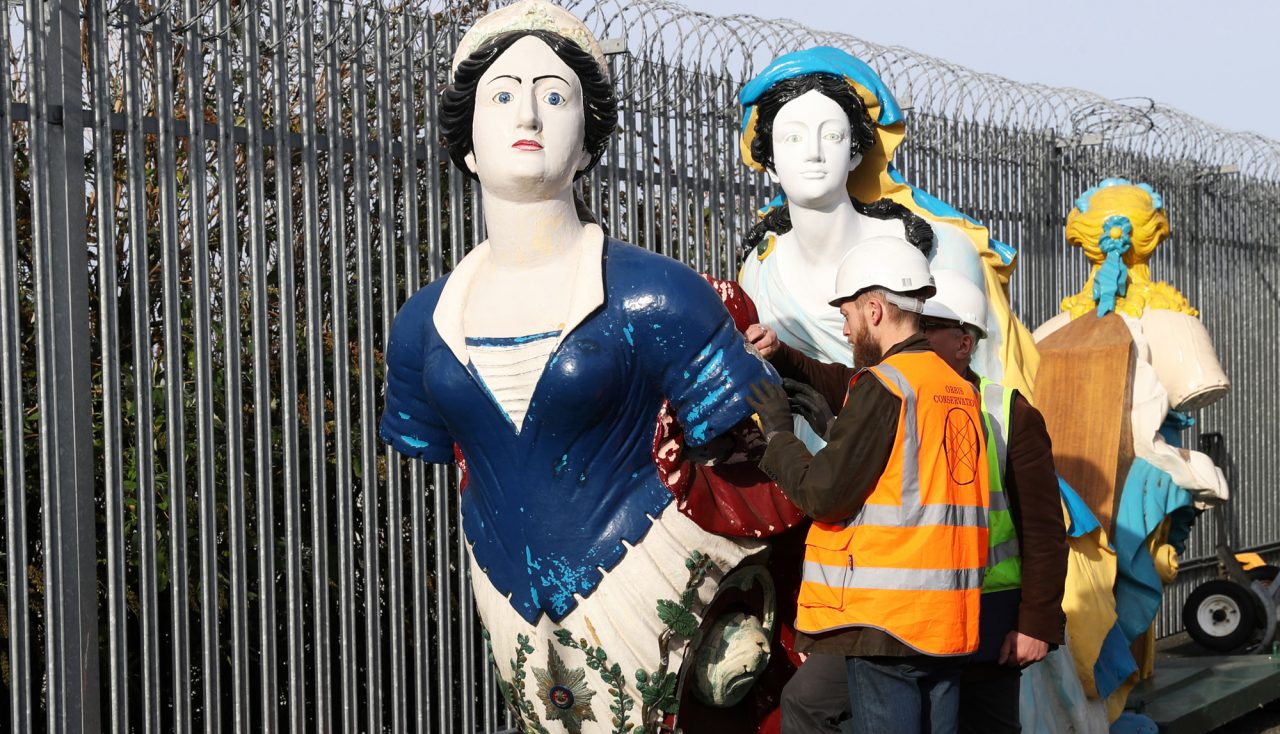 In an ambitious sculpture conservation project, 14 monumental 19th century naval figureheads have been saved from decay and are to go on display in The Box in Plymouth, the largest museum and art gallery space opening in the UK next year.

The Box, a £40 million complex that completely transforms, extends and combines the original City Museum and Library buildings and St. Luke’s Church, to create new galleries, a striking elevated archive with learning facilities and the first public square to be built in Plymouth since 2004, will form the largest museum and art gallery space in the South West of England when it opens for the Mayflower 400 commemorations in Spring 2020.

Three specialist conservation teams in London, Devon and Cornwall, led by Orbis Conservation, have spent over two years painstakingly restoring the 14 wooden figureheads to their former glory, after years of water damage led to rot and decay. On loan from the National Museums of the Royal Navy, the carved figureheads, built to adorn the bows of 19th century naval warships, will start making their way back to Plymouth on Monday 21st October.

Weighing over 20 tonnes collectively, the largest of the 14 wooden figureheads to be rescued is HMS Royal William or “King Billy” a 13ft tall, 2 tonne standing figure of William IV carved in 1833. One of the most badly damaged of the figureheads was HMS Topaz a three-quarter-length female bust carved in 1858, whose ship was responsible for removing two of the Easter Island statues that are now in the British Museum’s collection. Topaz had wood rot throughout 90 percent of her structure but conservators used extraordinary techniques including Sonic Tomography to save her carved outer shell, before carefully replacing the rotting wood and repainting her.

Other figureheads in the collection also have extraordinary histories including HMS Sybille, inspired by the ancient Greek oracle, which played an active role in the capture of Canton during the Second China War, HMS Centaur which fought pirates on the coast of West Africa and served during the Crimea War in 1855 and HMS Calliope which was stationed in Australia during the early 1850s and deployed to New Zealand in 1848 during wars with the Maori including the attack on Ruapekapeka.

Once the structural integrity of each sculpture was restored, one of the challenges of restoring the figureheads was how to faithfully replicate the original colour scheme of each individual sculpture. The conservation team did cross section paint analysis to determine the original colours of each figurehead as they had been painted over many times. They were also able to track down a set of 1912 full colour cigarette cards featuring the navy’s most famous figureheads from the previous century, which included HMS Calcutta one of the figureheads being restored for The Box. Conservators made up a palette of colours inspired by the cigarette cards that was then used to restore each of the 14 figureheads when they came to be repainted.

Now in the final stages of restoration, on the 18th October the figureheads will begin their journey back to Plymouth where almost all of the figureheads were originally built to adorn naval warships in the 19th Century. On arrival in Plymouth, the figureheads will be suspended within the main atrium of The Box in a huge sweep that appears to sail across the glazed façade of the brand new museum and contemporary art gallery complex. The ambitious aerial display concept has compelled teams of conservators to create complex but elegant structural mounts, with each figurehead secured in place with only 3 cables to create the effect of a fleet of carvings floating in space.

Led by Plymouth City Council, the figurehead conservation project is the most significant of its kind in a generation. It not only secures the future of the Devonport figureheads, but identifies The Box as a centre of excellence and innovation for the preservation and display of maritime heritage, with one of the largest collections of figureheads in the UK. The ambitious aerial display concept has compelled teams of conservators and structural engineers to develop innovative solutions to overcome the challenges of decay on a grand scale. The Box is a pioneer for conservation of Plymouth city’s heritage and a new ‘safe home’ for Plymouth’s important national collections and archives.